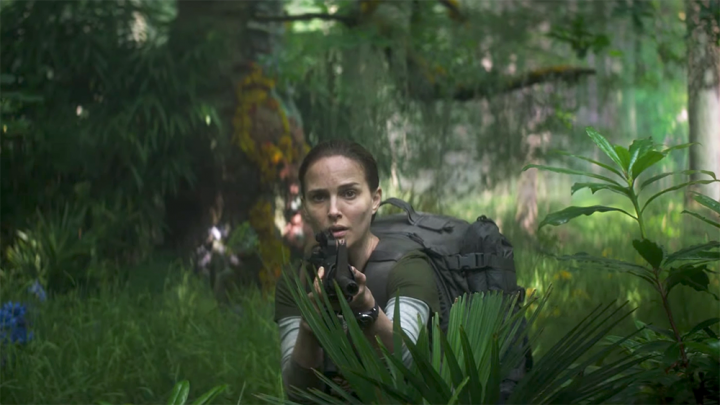 Gazing at the moon as it lingers in the daytime sky, a playful argument starts between Lena (Natalie Portman) and her husband, Kane (Oscar Isaac), concerning whether or not seeing the moon against a blue sky is a “mistake” on God’s part. “God is perfect,” replies Kane, but the human perception of imperfection in the moon’s occasional daylight appearance makes sense, and yet it occurs by design. It’s a natural idiosyncrasy, but it’s harmless compared to some of the changes occurring within Area X. Alex Garland‘s Annihilation (2018), an adaptation of Jeff VanderMeer’s novel of the same name, is an amalgamate of several genres and tropes that intersect in ways that both astonish and inspire awe. That the film is a crossbreed of sorts is quite fitting, as Annihilation is – at its most simple level – a film about expectations and how they can be defied. This quality is exemplified through the film’s plot and the manner in which the film is visually and aurally realized, which only makes this film more worthwhile.

It’s remarkable that seeing Lena alive in the opening of Annihilation as she recounts the primary events of the film’s plot isn’t anti-climactic, but that’s the strength of this kind of film – a film in which the “how?” of the dramatic action is paramount. Told with a non-linear approach through Lena’s personal account of what occurred in Area X, we’re gradually brought up to speed with how she came to be involved in a secret expedition through a territory from which only one other person had ever returned.

Beyond her research as a biologist and her professorial role at a university, Lena lives a lonely life as she attempts to move on from the death of her husband who served as a soldier in the American military. It’s been a year since she last saw Kane, but she knows that it’s time to make some changes. However, while repainting the bedroom she once shared with her husband, Kane miraculously returns home. Overcome by emotion, she embraces him with tears of joy as her sorrow is alleviated, but Kane’s thousand-yard stare signifies the trauma he’s endured. While Lena attempts to get some broad answers from her husband about his whereabouts for the past year, Kane is distant and unsure of where he’s been. Suddenly, he starts having a seizure while coughing up copious amounts of blood. Will she lose her husband again? En route to a hospital, the ambulance that Lena and Kane are aboard is ambushed by black SUVs and helicopters, and Lena is sedated and taken captive with her husband.

Waking up the next morning in a secret military facility on the border of Area X (or “the shimmer,” as it’s often referred to), Lena discovers that her husband’s mission for the past year involved exploring “the shimmer” and that he’s the only person who has ever come back alive. Were Kane’s peers driven to madness by “the shimmer” which compelled them to kill each other, or did something in the forests consumed by the ever-expanding “shimmer” kill them? No one knows, but an opportunity to get answers reveals itself. Having served in the Army for seven years herself and currently working as a biologist, Lena realizes that she may be of use on the next expedition into Area X, so she volunteers and joins a team of scientists lead by Dr. Ventress (Jennifer Jason Leigh). Their journey into “the shimmer” is filled with beauty unlike anything seen in the natural world, but it’s also filled with unimaginable horrors. In “the shimmer,” time seems to move at a slower rate and the flora and fauna which are seemingly familiar aren’t normal at all upon closer inspection. Natural laws are being broken at every turn as exemplified by various types of flowers growing from the same stock and animals sharing qualities from a host of species. Tensions run high among Lena and the other scientists as they struggle to make sense of these findings, and the theories around what happened on Kane’s failed mission haunt every step they take.

Like the crocodile with the teeth of a shark in Area X, Alex Garland manages to bring science fiction and horror together into a single film. This is the most obvious formal hybridization in the fabric of Annihilation, and of course it’s not a new idea. Still, this blending of genres is done with tenacity and a feeling of effortlessness that allows for us to sink into the journey through “the shimmer” with Lena and her cohorts and believe the strange things we see rather than dismiss them as implausible. The high quality of the special effects, specifically in the scenes of violence and the look of the hybrid creatures, aids in solidifying the seriousness of Garland’s first film since his directorial debut, Ex Machina (2015). The shocking naturalism of the violence in Annihilation is particularly effective at grounding the horror in a classic “man vs nature” framework. Brutal moments of body horror are presented in a manner that manages not to feel excessive, though they’re certainly not easy to sit still through.

In spite of all that works so well in this film, early on there’s an aspect of Annihilation that may pull some viewers out of the experience, or at least require some adjusting to: the film’s acoustic guitar score. Acoustic guitar and science fiction don’t seem like natural bedfellows, and they’re not exactly a fit here either, but somehow the choice is justifiable. Used both diegetically and not, the acoustic guitar is a reccurring sound for much of the first half of the film as the scientists make their way through Area X. As they get deeper into “the shimmer,” electronic music becomes more prevalent until it dominates the soundscape of the film in the final act. The “natural” sounds of the guitar – which bear a nostalgic quality for the character of Lena – shift to an entirely artificial sound by the end of the film in a change not too dissimilar from those occurring in “the shimmer.”

More than just a stylish genre exercise, Annihilation is a film of ideas that are not readily spelled out, and its conclusion may leave less curious viewers confused. We’re not meant to know everything, but that’s part of the fun of this film. The non-linear dramatic structure of Annihilation doesn’t simply present us with information Lena would’ve disclosed in interrogation following her return from Area X, as her memories of her marriage to Kane and the period when she was convinced of his death enter the narrative to inform our experience of “the shimmer.” The past operating with the present is another collision of disparate elements coming together to create a new whole, and yet the connections are subtle enough that they can fuel a myriad of interpretations of individual scenes and of the primary conflict at hand.

For all that is coming together in Annihilation, there is also the theme of self-destruction that taps into the loneliness of the characters on this journey. Like the characters in Henri-Georges Clouzot‘s The Wages of Fear (1953), everyone realizes they’re likely never going to return home, but they’ve volunteered themselves for this task regardless of the risk. To live is to eventually die, but even that truth is blurred in Area X. Life and death are the ultimate divide that Annihilation bridges, and with a topic as personal and natural as mortality, it’s a sign of Alex Garland’s strength as a filmmaker that he can satisfy our thirst for life and death in fiction, and our fear of both in reality.

Where does Annihilation rank on your Flickchart? Let us know in the comments below!