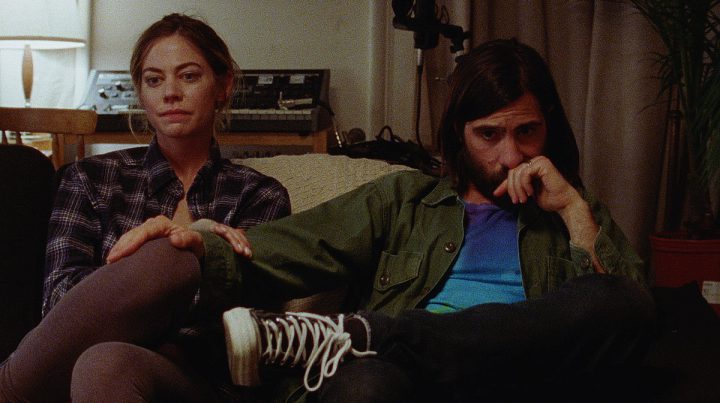 In Manhattan during the summer of 1955, Billy Wilder presented audiences with desires too delightful to be repressed in his adaptation of The Seven Year Itch (1955). Tom Ewell played an ordinary man with a laughably wild imagination who was tired of routine (routine being the undiagnosed problem at The Seven Year Itch‘s core). When “The Girl” (Marilyn Monroe) moves into the apartment upstairs on the day Ewell’s character’s wife and son leave the city for summer vacation, the titular “seven year itch” fully kicks in and consumes him. What transpires is fantasy, as a seemingly happily married man gives into his most primitive desires and seemingly gets away with an affair, which the film relishes in.

Some sixty-odd years later in Brooklyn, desire is still being tackled in films and the “seven year itch” still runs rampant. Coursing through the veins of Golden Exits (2017), the latest film by Alex Ross Perry, is desire – yet in this film desire is something to be resisted, as it is for many people in our daily lives. The desires resisted in Golden Exits aren’t just of a romantic nature though, as this is a film concerned with the follies of getting too comfortable and missing out on greener grass… or never looking for it at all. Alex Ross Perry’s previous films – specifically the comedies The Color Wheel (2011) and Listen Up Philip (2014) and the drama Queen Of Earth (2015) – touched on some of the themes in play here, but never with such an unfettered seriousness. Organized with plenty of breathing space, Alex Ross Perry has constructed an elegiac work of ensemble introspection – a film in which the feelings and thoughts of all the characters involved seem to be suffering from a shared malaise. Can the “seven year itch” prove fatal? Not necessarily, but what if it becomes a fourteen year itch? The clock is ticking, and for those afraid of disrupting their comfort, it’s an itch that can’t scratched.

Golden Exits straddles a world of two women and their respective husbands as well as the world of their single sisters. However, at the center of this ensemble drama is an outsider to both of those dramatic poles: a twenty-five year old Australian girl who “hardly knows a soul” in New York, Naomi (Emily Browning). Visiting New York for a few months on a work visa in an effort to gain some archival experience, Naomi will be working as assistant to Nick (Adam Horovitz). Middle-aged and seemingly satisfied with his current place in life, Nick’s latest archival gig is an in-family affair: archiving the correspondences and other documents of his late father-in-law. Haunting this particular gig are the concerns of his wife and her sister, respectively Alyssa (Chloë Sevigny) and Gwen (Mary-Louise Parker), who question whether Nick has hired Naomi in hopes of having an affair, as he admitted to having one with an assistant years before. However, their concerns that Nick would initiate an affair with his new assistant are somewhat misdirected, as Naomi has her eyes set on Buddy (Jason Schwartzman) who she met on her last visit to America over a decade ago. Happily married to Jess (Analeigh Tipton), Buddy feels uncomfortable about meeting up with Naomi to “catch up,” but he does it anyway because he’s a decent person who can’t say “no.” Someone else who struggles to say “no” is Jess’ sister Sam (Lily Rabe), who works for Gwen as her personal assistant.

Throw in the outsider Naomi, and conflict is able to develop on both sides of this familial divide. Still, Alex Ross Perry isn’t just using the character of Naomi to stir the pot, as there’s a feeling that everything the characters go through in Golden Exits could’ve happened or would’ve happened eventually, with or without her arrival in New York. That she arrives when she does means we get to experience the effect of her desire for Buddy as the “itch” sets in as well as Nick’s desire for Naomi as he continues his marital conflict. Naomi’s presence allows for routines to be broken, such as the daily lunch break with a wife or habitually eating at the same diner.

Alex Ross Perry elects to take his time revealing the exact relations of these people to one another, instead favoring the establishing of a sensation of distrust. Aiding in connecting these dramatic arcs is the original score by Keegan DeWitt. Melancholic in its tone, DeWitt’s score is used throughout much of the film to set and maintain a consistent atmosphere of sorrow without ever dipping into melodrama. Will Buddy lie to Jess about who he’s meeting for lunch? No, and he playfully undersells his impending meeting with Naomi whilst choosing not to break it off. Such a light note is fleeting, and the music cues the audience to be aware of something beyond a charming demeanor. Buddy knows that he’s potentially walking into a trap of sorts, but it’s a trap that only he can activate if he chooses to succumb to temptation. Fading in and out like a shadow on a partially cloudy day, the internal struggles of all the characters simmering beneath a facade of complacency can never fully vanish with the choices they’re making (or not making), and the music reminds us of this.

Edited as a perfect marriage with the score, scenes begin and end on their own time, and the music often rises as a shot fades to a somber black. The music is one intermittent dirge, with few rises or changes from appearance to appearance, and scenes operate in a comparable manner. Like an ellipses, Golden Exits just keeps on going the way that life does.

While Woody Allen‘s Interiors (1978) is a film of comparable tone and style, one would be forgiven for leaping straight to the work of Ingmar Bergman as a point of comparison, especially considering how articulately talkative many of the characters are about their fears and self-induced mediocrity. While all the performances are consistently strong, there are only a few scenes in which the dialogue seems forced in both its seriousness and transparency, specifically one involving Sam and Gwen. However, that particular scene needed to occur and manages to reach for something that we, as an audience, can feel. In many ways, such a reach defines Golden Exits, as it’s a film about people struggling to reach their potential and be forthcoming about their feelings.

“Desire is a novel idea,” says Sam at the thought of potentially living her life the way she wishes she could. What does she desire? What does anyone in Golden Exits desire? Love. If a film like The Seven Year Itch presented fantasy about infidelity and desire, then Golden Exits presents something closer to truth. Yes, relationships can grow thin over time, and that’s when the itch can become most difficult to resist. The relational problems in Golden Exits aren’t repaired or fully resolved by the conclusion, but that’s where this film’s strength lies. As spoken near the end of the film, in words akin to the final line of Paul Schrader‘s American Gigolo (1980), “Sorry it took me so long to come back” can say it all.

Discuss Golden Exits here or in the comments below!