From Book to Screen: Silver Bullet 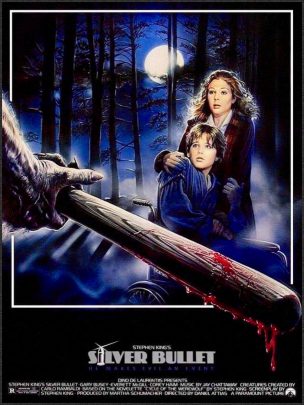 I see a full moon rising as we return to the Stephen King Book to Screen series. Last time, we covered one of the most famous of King’s novels, Pet Sematary. We’re skipping nothing in King’s bibliography this time as we move onto a far less-known novel. King’s sole werewolf story is a very short novel called Cycle of the Werewolf. 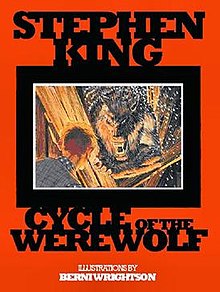 Cycle of the Werewolf is one of the more unique of King’s releases. It is only 127 pages long and debuted with detailed illustrations by Bernie Wrightson. Only loosely a novel, it’s a collection of short stories based around the same werewolf killer. The hook of the book is that each chapter takes place in a different month and features the werewolf’s monthly transformation and associated murders.

The book had a unique origin as it originally began as an illustrated calendar with King writing vignettes for each month of the calendar. King found the size and length of the vignettes extremely frustrating and preceded to write a short novel, which was published by Land of Enchantments in November 1983. King admitted to cheating on the lunar cycle, placing more full moons on the significant holidays of each month than would actually take place. This was done to focus the reader’s mind on each month.

Information is scarce on how reviewers received this book at the time of released or even how well it sold. A few reviews on the internet from people who were around then noted how expensive Cycle of the Werewolf was, likely due to the illustrations.

It is a fun enough novella. While it doesn’t elevate the werewolf genre especially, King manages to thread in some quality characterizations. He also proves that, despite his penchant for word vomit, he knows how to be efficient and craft interesting characters and tension in very few words. Some of the scenarios and language here are quite creative, and they deliver the horror thrills you opened the pages for.

Cycle of the Werewolf is not a gem from King, but it’s an interesting enough work that even non-King fans might find this a good short read, if not particularly profound. 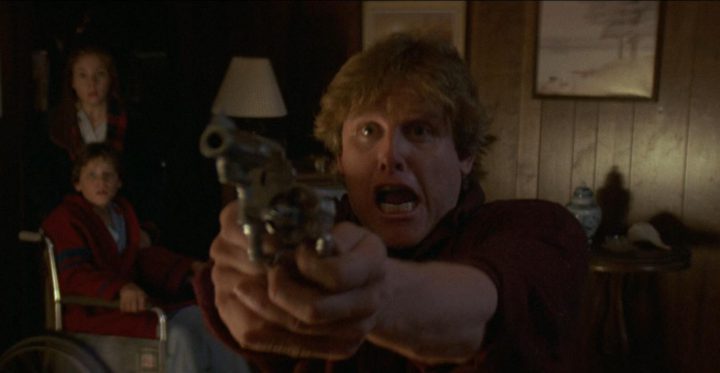 Cycle of the Werewolf was adapted during the storm of Dino de Laurentiis King adaptations in the 80s. He quickly purchased the rights and filming had began October 1984, taking about two and a half months to finish. Retitled Silver Bullet, King actually wrote the screenplay himself, and it does follow his novel fairly closely. One of the major conflicts that occurred during the filming was King’s position on the look of the werewolf versus Laurentiis’s. King had asked for a plain-looking and hard-to-see monster in order to achieve something more grounded and realistic. After seeing what Carol Rambaldi designed, though, Laurentiis demanded a change. King and Rambaldi refused. Meanwhile the original director, Don Coscarelli, began filming scenes without the finished monster suit. When he finished filming all the non-werewolf scenes, the suit was still not available, and he resigned.

Dan Attias took over and is the credited director. Laurentiis, forced to either cancel the film or bend to King and Rambaldi’s position, reluctantly allowed the filming to proceed. Silver Bullet came to theaters in October 1985 and grossed $12.4 million on a $7 million budget, becoming a small hit. While Roger Ebert gave the film three stars, most other reviews at the time were not so kind, slamming it as a low-grade King schlock fest. Despite that, Silver Bullet has gone on to become something of a cult classic.

Plenty of that can be laid at the feet of Gary Busey‘s energetic performance. As Uncle Al, he is a mentor of sorts to the young, disabled protagonist played by Corey Haim. Busey was allowed to ad-lib most of his scenes, though there were takes where he read the script as written. King and Attias usually liked the ad-libs more and used them in the final cut. Though Busey is goofy and over the top, he brings quite an energy to the film. There is also plenty of good gore. There are notable kills throughout the film, including a man getting impaled on a wooden floor plank. 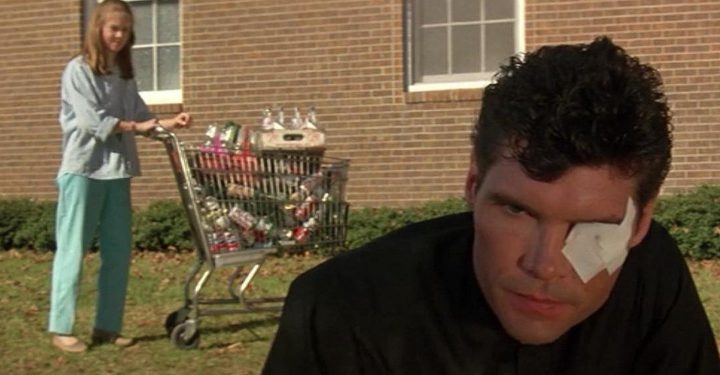 Unfortunately, the film lacks a bit for actual tension and dread. Aside from one notable dream sequence wherein a congregation of parishioners suddenly turn into werewolves, few other sequences really induce fear. While leaving Busey’s ad-libs in the film was a good move, Laurentiis had the right instincts about the werewolf. The werewolf in this film looks more like a bear and is really a fairly mediocre-looking creature on the whole. It shows the cheapness of the film, and not in a good way. And while the film does a better job than the book of keeping the mystery of who the werewolf is (the novel kills the mystery by revealing who it is very early on), it ultimately is pretty obvious.

Everett McGill‘s performance at first juggles innocence and guilt about what he is, but it turns rapidly into pure evil menace. You don’t know where your sympathies are supposed to lie. Meanwhile, the film tacks on an unnecessary criticism of religion to explain why the werewolf won’t kill himself, rather than the novel’s explanation of plain selfishness, which is symbolic of King’s struggles with addiction. This switch guts whatever thematic content the novel had.

Still, Silver Bullet does offer some good, cheap thrills. Plus, props have to be given to the film for maintaining the young protagonist as a disabled boy. 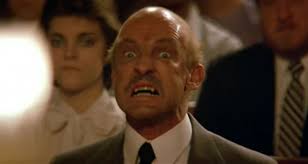 Silver Bullet certainly isn’t a great film, but nor would I call Cycle of the Werewolf a great King novel. While there is certainly  a better film out there to be made, this type of 80s schlock is a good enough way to get a taste of the book. It only nods to the lunar cycle structure of the novel, but it keeps the book’s events in place. Fans of those Wrightson illustrations may be delighted to find how the film brings some of those drawings to life. Non-King fans may not find much here to push them into watching it, though, and the time may be ripe for a creative filmmaker to try again.

Tell us your thoughts on Silver Bullet below and rank all of the Stephen King films on Flickchart!