On Friday, the world was saddened to learn that legendary actor Christopher Plummer had passed away at the age of 91. Having been working in film since the 1950s, and forever immortalized by his role as Captain Von Trapp in The Sound of Music, it nonetheless seemed that Plummer was just getting started at age 80, doing some of his most heralded work in the past ten years. Three times nominated in the 2010s, he became the oldest actor to ever win a competitive Oscar with Beginners. Even in his final major role, as the linchpin of Rian Johnson‘s heralded whodunit Knives Out, it seemed like Christopher Plummer might grace our screens forever.

We remember the remarkable actor with his highest-ranked films on Flickchart. As the father who starts living openly as a gay man at the age of 75 in Mike Mills‘ semi-autobiographical Beginners, Christopher Plummer didn’t need awards to validate a performance full of heartache, humor, and joie de vivre. But there is something satisfying about him receiving an Oscar at that age for playing a character who validates the idea that it’s never too late to start living your fullest life and embracing your truest self. And in a film that hits home deeply for me on several levels, it gives me hope that even an octogenarian still has the capacity to change for the better, to learn a deeper sense of empathy, and to tap into a childlike sense of joy and wonder. – Tom Kapr As the eyepatched, mustachioed General Chang in The Undiscovered Country, Plummer is arguably one of the most complex villains in Star Trek‘s venerable history; certainly in its feature films. With Plummer’s dulcet tones giving credence to the idea that “You’ve not experienced Shakespeare until you’ve read him in the original Klingon,” Chang is so much more than Christopher Lloyd‘s brutish Captain Kruge in The Search for Spock or Ricardo Montalban‘s operatically revenge-driven title character in The Wrath of Khan. Chang is the calculating mastermind who understands his enemy and will gain his trust before slipping the knife into his back. He’s the perfect foil for a galaxy-weary Kirk (William Shatner) and company on their final big-screen voyage, and he’s a big part of the reason Star Trek VI is one of the franchise’s finest theatrical outings. – Nigel Druitt Plummer is the slimiest part of a stellar cast in director Spike Lee‘s twisty bank heist caper. As the owner of the targeted bank, Arthur Case has a damning secret to hide, and Plummer makes going toe-to-toe with the likes of fellow Oscar winners Denzel Washington and Jodie Foster look easy. Inside Man also throws him into a role that stands in sharp contrast to The Sound of Music‘s heroic Captain Von Trapp as Case’s past dealings as a Nazi collaborator are laid bare. – Nigel

Michael Mann‘s media drama sees Plummer opposite the likes of Al Pacino and Russell Crowe (it earned the latter the first of three consecutive Best Actor Oscar nominations). The veteran is more than up to the task, of course; look no further than the scene where Plummer’s veteran journalist, Mike Wallace of 60 Minutes fame, lambasts a room full of CBS corporate stooges who would dare to edit his broadcast. – Nigel Plummer is only in a handful of scenes here as the patriarch of the Vangers, a family of Swedish industrial titans who are hiding more skeletons than a William Castle flick. But he is the beating heart of the film. While Lisbeth Salander (Rooney Mara) and Mikael Blomkvist (Daniel Craig) are undoubtedly the main characters — and fascinating ones, with complex and intriguing storylines of their own — it is Plummer’s Henrik Vanger who provides the unfolding central mystery its emotional through-line, from the film’s cryptic opening scene to his final, wordless emotional breakdown. – Tom 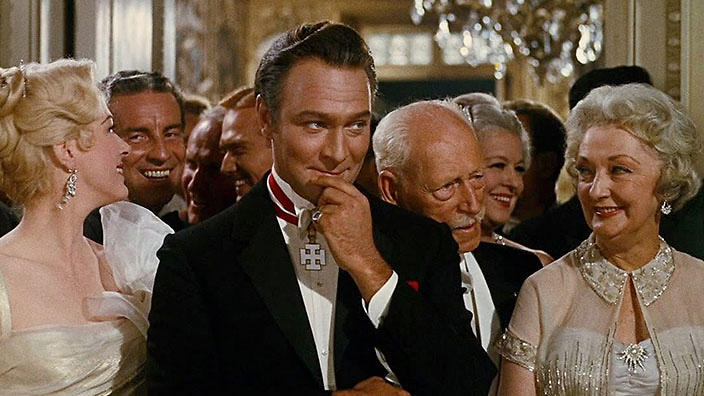 Plummer has said of The Sound of Music that “it’s her movie,” referring of course to Julie Andrews. Whether he meant to disclaim, to be modest, or simply to keep the focus on Andrews’ stellar singing and acting, he was only half right. It’s not so much that the movie depends on chemistry between Andrews’ Maria and Plummer’s Captain von Trapp, though chemistry is a baseline requirement for any successful screen romance. It’s that this particular story hinges in so many ways on Plummer’s ability to convey monumental political and cultural shifts between Andrews’ bright musical numbers. At first he is a prototype of the European old guard: he’s in the Austrian Navy, a geographical irony that’s a legacy of pre-war imperialism; he’s engaged to a baroness, someone befitting his social position; and most importantly he’s an authoritarian and largely absent father, like many men of the old school. Just as Mary Poppins‘s George Banks has that movie’s most dramatic character arc, The Sound of Music‘s sea changes all pivot on the Captain. The insidious rise of Nazism forces him to reframe the meaning of duty. The arrival of Maria, an ex-nun turned governess, causes him to abandon his respectable marriage plans and seek a match based on affection rather than class. And of course there wouldn’t be a movie or a Trapp Family Singers group if he didn’t shake off the emotional shackles of his era and his past in order to embrace the joys of family and music. Sure, it’s Andrews’ movie. It just doesn’t exist without Plummer, who sells all of those big ideas with comparatively little screentime. – David Conrad A Beautiful Mind is the Academy Award winner for Best Picture, based very loosely on the true life story of celebrated mathematician John Nash. Here Plummer plays Dr. Rosen — a concoction of the screenwriter, but one that is necessary to depicting Nash’s stint in a psychiatric hospital after being diagnosed with paranoid schizophrenia. Dr. Rosen is more of a plot device than a character, and the best thing to do in that instance is bring in an actor who can imbue the role with the necessary authority and empathy, two qualities Plummer carries in spades. – Tom Rian Johnson’s elaborate love letter to the whodunit genre shares more than a passing similarity with the much darker The Girl with the Dragon Tattoo. Again we have Plummer as a the good-natured patriarch of a supremely screwed-up family; again we have an apparent murder that defies solution; and once again we have Daniel Craig as the detective interloping in the prestigious, secretive, and self-important family’s affairs and upsetting their apple cart. Here, however, it is Plummer’s own Harlan Thrombey who has died under mysterious circumstances — he’s dead before the film begins and is only shown in flashbacks, or in versions of flashbacks, as it were. Plummer has one or two more recent credits on his filmography, but this really does feel like his swan song. A film about the legacy of Harlan Thrombey, Knives Out provides the perfect capstone on Plummer’s own legacy in film. – Tom 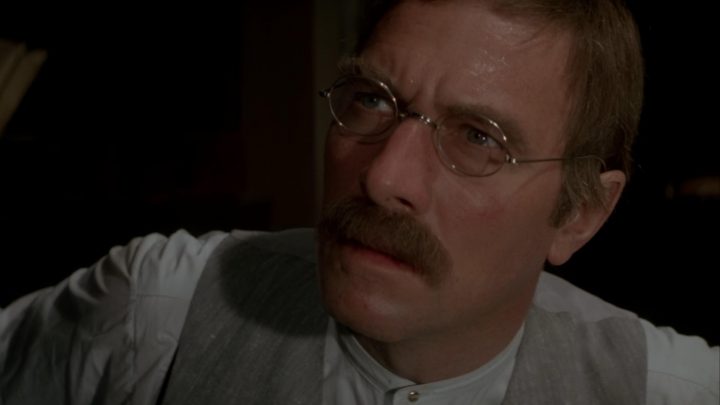 Plummer was the kind of man who could appear on screen for just a few minutes yet remain a presence for the whole the movie. That string-pulling quality made him an ideal fit to play Rudyard Kipling in a movie based on an actual Kipling story. The book The Man Who Would Be King is a first-person narrative about two doomed men who undertake a mad quest on the fringes of British India. It is important that neither of the men narrates their own story; instead the narrator recounts it with journalistic detachment, but also with an appropriate mix of pity and horror. The movie strikes the right tone in the opening scenes as the two adventurers (Sean Connery and Michael Caine) cross paths with Kipling, first to pick his pocket and then to seek his blessing for their outlandish scheme. In a few scenes and a few lines, Plummer exudes Kipling’s characteristic mixture of dreamy “what if?” fantasy and stuffy Victorian reserve, and the tension between those poles propels the movie’s flawed protagonists through their awesome, humbling journey. – David Pixar Animation Studios has created its fair share of remarkable films over the past 26 years, but few are more remarkable than the rollicking adventure that stars a pair of octogenarians. As Charles Muntz, Plummer at first provides the heroic voice of inspiration for young Carl Fredricksen (Ed Asner) to seek his life’s great adventure. Later in the film, as Muntz’s obsessions take him too far, Plummer deftly takes a turn for the villainous, and the menace in his tones make a perfect foil to Asner’s crotchety hero. – Nigel 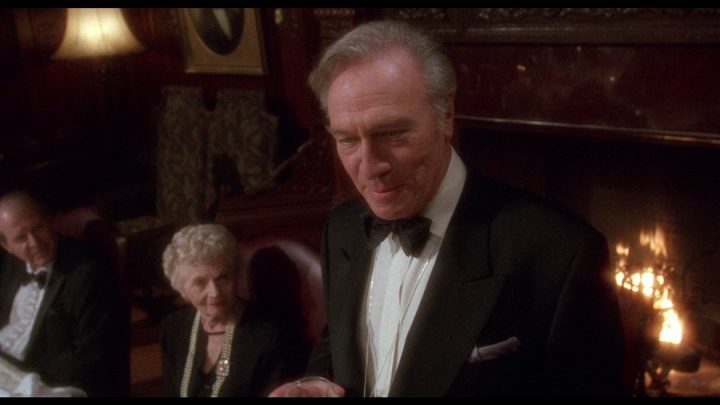 It was strange and wonderful to hear Daniel Craig’s broad Louisiana accent as he got to the bottom of Plummer’s character’s death in Knives Out, and it is equally strange to recall that Plummer once tried out a similar drawl for Terry Gilliam’s trippy mystery 12 Monkeys. Plummer plays a southern scientist and the father of a neuro-atypical radical (Brad Pitt). The scientist is involved with viruses and animal experimentation, and the son plans to exploit those connections in order to bring about a kind of apocalypse. The apocalypse is actually a fait accompli in the movie, and it is the job of a time-traveling Bruce Willis to figure out how it happened. Plummer’s character dangles in front of Willis like scraps of newspaper clippings, but he is difficult to work into the puzzle — like Plummer with a southern accent, something about it just doesn’t fit. By the time the picture comes together and Plummer’s role becomes clear, it may already be too late. Plummer’s crooked smile tells us that maybe it always was. – David

What are your favorite Christopher Plummer roles? You can see all of his highest-ranked films here.