Reel Rumbles: The Dissident vs The Wolf in the Moonlight

If there is one thing we know about the times in which we live, it is that democracy is on thin ice. Future historians will debate when this “moment” started, and we do not yet know when or how it will end, but we know from a basic vibe check that autocracy, demagoguery, and plain old-fashioned nationalism are in the ascendance while pluralism, multiculturalism, and internationalism are on the defensive. This is true in the United States, in many parts of Europe and Asia, and in the ostensibly borderless realm of the internet.

Documentaries that grapple with this big, central fact of contemporary life are among the first artistic works to do so. Two new ones, The Dissident and The Wolf in the Moonlight, each address the problem in a reflexively democratic way: by spotlighting an individual and his ideas. The two men at the center of these movies come from very different places and are on different sides of the issues at hand, but they each illustrate the power of ideas on our lives… and the consequences of putting those ideas into the world.

The Battle of Ideas

Alexander Dugin, the subject of The Wolf in the Moonlight, is sometimes called “Putin’s Brain.” He is a philosopher, but not one confined to an ivory tower. Rather, Dugin has at times had the ear of Russia’s leader-for-life Vladimir Putin, quite possibly the most powerful man in the world, and Dugin’s books are required reading in Russian military and diplomatic circles. His worldview is anti-liberal, anti-Western, anti-science, pro-war, pro-empire, and very, very pro-Russian; in fact, he says that he “cannot conceive of being human without being Russian.” It is not a stretch to call him a fascist, though Dugin quibbles over that label; even extremist philosophers cannot resist semantic quibbling. In recent years he and Putin have apparently had something of a falling out when Putin proved less expansionist and draconian than Dugin hoped. 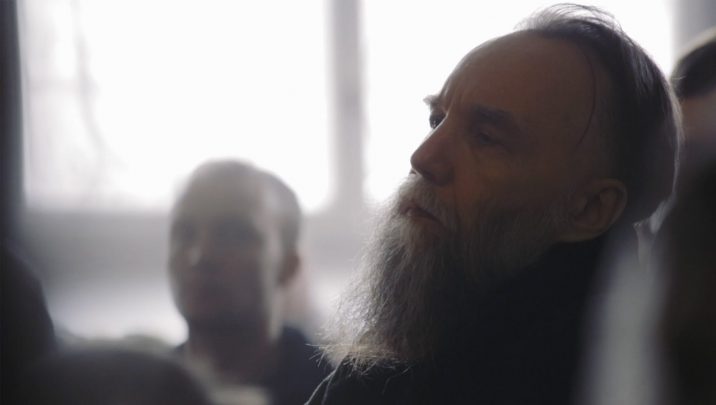 The documentary is a compilation of recent interviews that Dugin granted to British filmmaker and ex-diplomat Nicholas Rooney. Rooney asks clear questions that are both fundamental and specific. Dugin, rather disappointingly given his reputation as a firebrand and his penchant for producing salacious pull-quotes, often hedges and prevaricates. He is misunderstood, of course; it is not that non-Russians are not human, it is just that we cannot recognize them as human without denying the idea of humanism, since humanism emphasizes our superficial similarities instead of the unique cultural markers that most cultures use to define “human.”

It’s a very strained argument, and a defensive one, but what Dugin seems to want from participating in this documentary is to cement a legacy outside of his political influence. He speaks to Rooney as one thinker to another, above the frays of the moment. As if to prove his equanimity, he speaks frankly about Putin’s unconvincing explanation for the Skripal poisoning case of 2018. Yet after enduring two hours of Dugin’s broad-stroke rationalizations (“the only real philosopher is a dangerous philosopher” is a characteristically fatuous one), the most natural conclusion to draw is that he is both a poor apologist for his life’s work and an unrepentant abettor of strongman politics. He would probably cop to both. 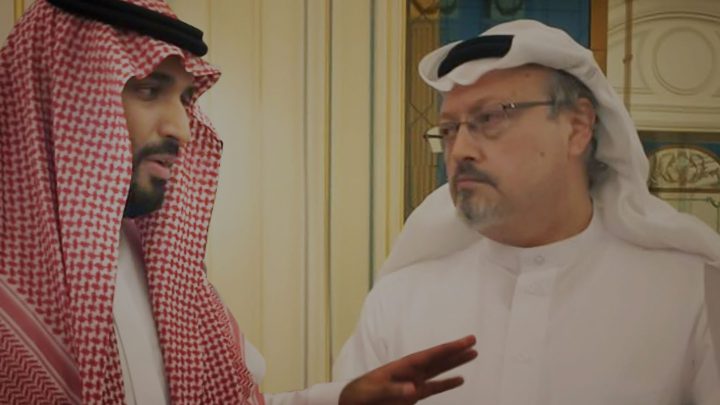 The Dissident‘s subject, Jamal Kashoggi, was a journalist and free speech advocate whose name became a rallying cry when the Saudi government had him murdered and dismembered in the conference room of their Istanbul embassy in 2018. The killers failed to cover their tracks, and soon everyone from newspaper editors to YouTubers to Jeff Bezos were calling for justice and refusing to do business with Saudi Prince Mohammed bin Salman (“MBS”) or his government. Saudi Arabia lost billions of dollars in international deals as a result of the scandal, and around the world politicians on the left and right condemned MBS as a murderer. (President Donald Trump continued to defend MBS and sell weapons to Saudi Arabia despite a mountain of evidence and the strong protests of members of his own party.)

What did Kashoggi say or do to cause Saudi Arabia to risk so much to get rid of him? Nothing very drastic. Kashoggi was no radical. He did not expect Saudi Arabia to become a democracy overnight, and he did not single out MBS for special censure. In columns in The Washington Post and several Arabic media outlets, Kashoggi encouraged the Saudi government to tolerate criticism and adopt a more lenient attitude toward free speech. Saudi Arabia was trying to improve its image abroad by granting more rights to women, and an estimated 80% of the country’s citizens were on Twitter, able to interact and share ideas with the world. Yet anyone who expressed an opinion critical of the Saudi royal family risked imprisonment, exile, or assassination. Their families could suffer retribution as well. Kashoggi first lost his home and his family for using his old media platforms to promote free speech, and when he partnered with fellow expatriates on a robust Twitter messaging initiative, he lost his life as well.

Kashoggi is a martyr for free speech and the free press. These are simple ideas but incredibly powerful ones, which is why autocratic leaders like MBS react to them so savagely. On the other hand, Dugin has used his intellect to flatter and justify cruel rulers. His ideas have power as well, subtle and insidious though they may be. In a world slanting toward illiberalism, free speech is a potential corrective, but it is not enough on its own. People must still reckon with the ideas that underpin and protect authoritarianism and put forth compelling and specific alternatives to them. Right now, in the global battle of ideas, the Dugins of the world are winning.

Winner of The Battle of Ideas: The Wolf in the Moonlight

The Battle of Heroes and Villains

Kashoggi’s death brought out the hero in nearly everyone. His fiancee, a doctoral student named Hatice Cengiz, has traveled the world speaking about the incident and calling for justice. Amazon CEO Jeff Bezos cancelled a huge deal with Saudi Arabia and used the pages of The Washington Post, which he owns, to demand accountability; MBS’s cyber team hacked Bezos’s phone and leaked details of his personal life in retaliation. United States Senator Lindsey Graham and others in the Republican party broke with President Trump to call out the murderers. Omar Abdulaziz, a young Saudi dissident in Canada who worked with Kashoggi on the Twitter campaign that likely got him killed, has increased his online presence even as his brothers languish in a Saudi prison – the government hopes to use them to silence or control Abdulaziz. Kashoggi’s death eliminated one important voice, but as The Dissident shows, it galvanized a movement and derailed the Saudi government’s agenda for the near future.

Dugin is the only person on screen during most of in The Wolf in the Moonlight. The film does not examine the extent to which Dugin has influenced Russian policy, nor are there interviews with people who object to Dugin’s philosophy on intellectual or practical grounds. Rooney is on hand to ask the right questions and push back against some of the more provocative answers, but for the most part he allows Dugin’s words to stand alone. Dugin’s ideas, good or bad, are impotent without people like Putin to translate them into action, but the dimensions of action and consequence are absent from this documentary. Wolf in the Moonlight is all about capacity – Dugin has the capacity to think great and terrible thoughts, and these thoughts have the capacity to move men to great and terrible deeds, but whether they do, whether the wolf feeds or starves, is a question for another movie.

Winner of The Battle of Heroes and Villains: The Dissident

The Battle for Hearts and Minds

Though Dugin speaks in the language of academics, his philosophy is a populist one: Russia for Russians, and the world for Russia. There is a fascinating sequence in Wolf in the Moonlight, one of few in which people other than Dugin and Rooney appear, that takes place at a camp in the wilderness. Some people who look very Russian indeed – an Orthodox priest, a woman in a headscarf – gather around a fire to sing traditional songs and listen to Dugin expound upon the Russian soul. At one point Dugin elicits knowing chuckles from the crowd by saying, in passing, that “everything is falling apart.” That’s a sentiment that’s familiar enough in the West, but we usually assume that the inverse is true for countries like Russia that are poised to capitalize on friction and fissures in America and Europe. The fact that Russians might also feel a sense of decay and things ending is an enlightening one, and it might partly explain why Dugin’s ideas resonate. He offers reassurance (if you’re Russian) that problems are external things to be conquered and subdued, while answers are within you, old tribal answers waiting to be rediscovered.

This is an interesting angle through which to understand Dugin, but it is all too fleeting. The documentary’s other ways of illustrating Dugin’s monologues are less impactful. Rooney stages some ballet in the woods and periodically cuts away to medieval illustrations and archival footage, but these techniques do not cast light on Dugin the way that watching his countrymen listen to him does. Dugin may be very effective at winning hearts and minds to his nationalist cause, but the documentary only hints at why we should care about that, and it provides no avenues of entry for viewers innocent of this man and his significance.

Netflix, Disney, and even Bezos’s own Amazon declined to distribute The Dissident through their streaming platforms, a decision that Oscar-winning director Bryan Fogel attributes to fear and greed. Despite the international outcry over Kashoggi’s murder, anxiety about Saudi backlash remains salient even within powerful media corporations. As long as access to The Dissident remains limited and expensive, its ability to reach people not already familiar with the story is also limited.

Yet people who do see The Dissident will be moved to action. They will fill in the gaps in their friends’ and families’ memory of the Kashoggi story. They will follow Omar Abdulaziz and Hatice Cengiz on Twitter. They will pay attention to what their congresspeople say about Saudi Arabia and Mohammed bin Salman, and how they vote. They will be suspicious of drones on social media who exist to boost a state’s official narrative and swarm its critics. They will become dissidents, and together they will have power.

Winner of The Battle for Hearts and Minds: The Dissident