From Book to Screen: The Dark Tower

Last time in this series, we covered Stephen King’s final Richard Bachman novel before the pen name was outed, The Running Man. King used his own name to publish a unique story that had been over a decade in the making: The Dark Tower. This book was the beginning of his magnum opus series, a linchpin of all other King works and his defining statement on his view of humanity. All of his work’s connections to each other would eventually be informed by the Dark Tower novels. The massive series has experienced development hell at every turn, and some consider it unfilmable. With only one screen adaptation so far, and it being not kindly received to put it lightly, the future of any potential Dark Tower cinematic universe is up in the air. That one film is actually a sequel to the books, so this article will tackle the entire novel series. Let’s follow the Man in Black across the desert alongside the noble Gunslinger. 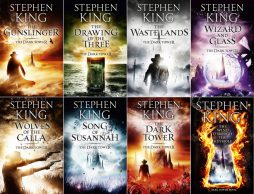 The inspiration for the original book, The Dark Tower: The Gunslinger, came while Stephen King studied at the University of Maine. He read the Robert Browning poem, “Childe Roland to the Dark Tower Came,” and felt compelled to write a novel capturing the feel of the poem. Twelve and a half years passed before he published. Over the course of the writing process, King began to gestate ideas for combining the epic fantasy of Tolkien’s The Lord of the Rings with the iconic imagery of the American West. King’s central protagonist, Roland Deschain, began to form based on the imagery of the Man with No Name, Clint Eastwood‘s character in Westerns by Sergio Leone. King promised himself that he would cease writing the second it became too derivative (specifically, if elves popped up), which apparently never happened. The Gunslinger came out in paperback only and didn’t have a wide release, based on King’s belief that few people would be interested. His wrong assumption meant that a second printing was soon required.

King proceeded to write seven more novels in the series. The books combine and make use of several characters and images from his individual works. One of the central antagonists, the Man in Black, is none other than Randall Flagg from The Stand. It‘s titular creature species appears alongside even greater evils. To list all of the crossovers would be beyond the purpose of this article, but needless to say, The Dark Tower is the great constellation that arcs across the skies of King’s writing world. Though not as popular as King’s most iconic works, the series has been a decent seller, and rabid fans have made many a website dedicated to the novels and the way they shape the greater King universe.  Even after supposedly concluding the series, he wrote an eighth entry due to his drive to continue fleshing out the story.

King has stated an intention to rewrite the entirety of the series at some point. He has already republished The Gunslinger with alterations to flow better with the rest of the series and to improve what he thought was sloppy writing. The Dark Tower as a novel series may never be truly finished while King still breathes. Regardless of the finality, and whether the idea of finality even shores up with the central conceit of the series, it truly is a fun if voluminous work to read. The Gunslinger is a great starting off-point and works well on its own, even if many of the ideas and characters would be fleshed out with future entries. Though it is a grand undertaking to make, it is well worth taking the journey to the Tower if you enjoy King’s writing. Even non-horror fans often find themselves enjoying this series, due to the vastness of the genres covered. 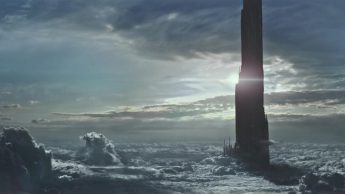 Released in 2o17, the film version had a troubled production to say the least. The earliest machinations towards a film began in 2007 with J.J. Abrams trying to bring the epic work to screen. At the height of his Lost popularity, Abrams convinced King he was the right visionary to bring the books to life, and the rights were optioned to him. The business of finishing Lost took over for Abrams, though, and he and his fellow co-writer Damon Lindelof struggled with the idea of committing the time and effort to bring the books to life. Universal Pictures took over in 2010 and attached Ron Howard and Akiva Goldsman as director and screenwriter, respectively. Javier Bardem and Viggo Mortensen were among the names in contention for the lead of Roland. However, the scope of the project continued to make producers skittish. At one point, the series was to be made into a film followed by a television series. Bardem was officially attached, but it fell apart again by 2012 as Universal was too cautious about the cost of the endeavor.

Three years of uncertainty followed. Howard remained committed and garnered interest from HBO at one point, but they passed. The project was passed in front of another studio, Warner Bros., with new actors being considered including Russell Crowe, Aaron Paul, and Liam Neeson. Eventually, they would also pass, and Howard would step down from directing duties. The project seemed dead in the water until Sony purchased the rights in 2015 and began to fast-track the film, attaching Nikolaj Arcel, known mostly for small-scale Danish dramas, as director. With Howard producing, the project moved forward quickly with Arcel and Anders Thomas Jensen rewriting the script. Idris Elba and Matthew McConaughey signed on as the leading characters and filming finally began.

Despite reaching the production stage, more signs of trouble began to unfurl. The release date was pushed back multiple times, and reports of Arcel being removed from the project began to appear. Reportedly, Howard and Goldsman stood up and were able to keep Arcel in the directing chair after encouraging Arcel to clean up the film’s narrative and fix the music. Unfortunately, this would be of little help, as the film debuted to lackluster reviews and a box office on the low side of average, making $113.2 worldwide at the end of its run on a $66 million budget.

Regardless of whether Arcel’s original vision was better than the studio’s, The Dark Tower reflects its tortured development. It is a flavorless adaptation of the ambitious book series. Though technically a sequel to the series, that doesn’t mean much to people who haven’t read the books. The film covers material from several novels in the series, combining elements of The Gunslinger as well as large portions of the center part of the series.

This crammed storytelling is likely to blame for the film’s narrative flatness. The attempt to adapt a The Lord of the Rings-sized story into a single, 97-minute picture make the film feel rushed as it jumps from plot point to plot point without giving any of the material any of the staying power required to make it work for newcomers. One has to wonder why the obvious tack, adapting the events of the first book, wasn’t taken, given that first novel’s small scope and strong introductory material. Ron Howard later hinted in an interview that the compression of the film was a result of the studio trying to satisfy what it thought a general audience would want. 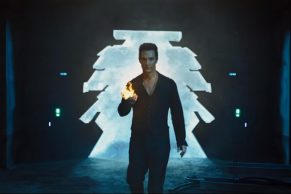 Strangely, the movie focuses on one of the side characters from the first novel, Jake, instead of the leading protagonist of the series, Roland. This is especially a shame as the two leading performances from Elba and McConaughey were easily the strongest parts of this adaptation. The central dynamic between these two in the series’s first novel could have made for screen gold with the efforts from Elba and McConaughey. Instead, we focus on Jake (played competently by Tom Taylor) and reduce the mysticism of the novel into more typical young adult fiction fare.

All of the story failings aside, The Dark Tower ultimately fails on a filmmaking level as well. The editing is bland and seemingly purposeless. The cinematography is uninspired. Compare with the epic scope of Peter Jackson‘s Tolkien adaptation, which breathed respect for the source material into a wider audiences and delivered a truly inspiring fantasy epic. The Dark Tower had the potential to be a similarly monumental undertaking, but instead it is a mediocre and lifeless picture that even the deranged Jack Torrance could have written better. 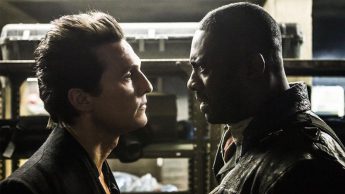 The Dark Tower is unfortunately the epitome of the phrase “wasted potential.” King fans could watch it, but will likely be disappointed. While the film does include fun King Easter eggs hinting at the breadth of the novels’ interconnectedness, any hopes of a King Cinematic Universe likely died here, if it were even possible given the legalities of the various cinematic rights involved. The biggest shame is that Matthew McConaughey was a perfect casting choice for Randall Flagg and was potentially available for the same role in the upcoming The Stand miniseries. Instead, that series has gone in a different direction and we’ll likely never seen the Texan’s perfect smirk portray one of King’s darkest characters.

Though there were initial talks of a sequel film, that project has died, though Amazon is moving forward with a rebooted miniseries. Fans of the series may get the adaptation they deserve if Amazon pays respect to the material. A truly connected Kingverse would be the ultimate goal, but likely an impossibility unless one studio purchased all of the King novel rights and remade enough of the films to make a massive Dark Tower film series worth the effort. At the very least, there is definitely room for a better The Dark Tower film. For now, fans will have to turn to the small screen. It goes without saying that the novels are the better material.