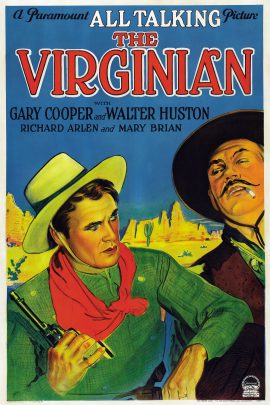 “This country isn’t big enough for the both of us!” – Trampas

In 1929, six Western films were released: three “talkies,” two silent films (Redskin, Thundering Thompson) and one serial (Queen of the Northwoods). One of the talkies was In Old Arizona, which we recently spotlighted here. The other two were Tiger Rose and The Virginian. Tiger Rose was a remake of a 1923 silent film of the same name and stars Monte Blue and Rin Tin Tin, the canine film star. The 1929 film The Virginian can be viewed on YouTube in its entirety here. 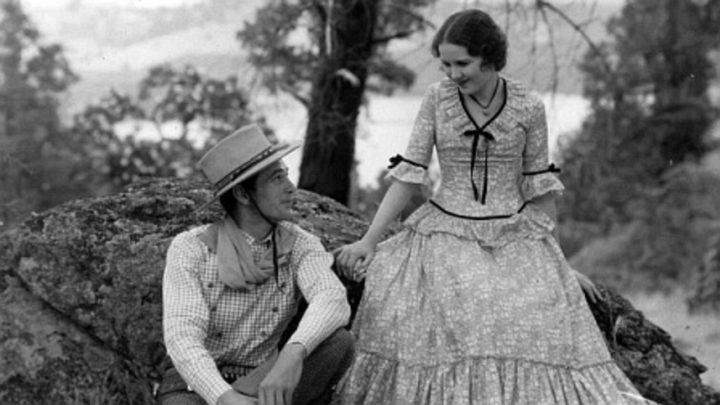 The Virginian stars Gary Cooper, Walter Huston, Richard Arlen, and Mary Brian, and was directed by Victor Fleming. If Fleming’s name sounds familiar, it’s likely because he directed Gone With the Wind and The Wizard of OZ a decade later. Cooper’s titular Virginian is a trail boss who is a bit mischievous but also quite cunning. His friend Steve (Arlen) rides into town after they’ve been estranged for several years. Unfortunately, Steve has gotten himself into a bad situation in which he’s stealing cattle from others under the direction of Trampas (Huston). Molly Wood (Brian) is a “school marm” from back east who develops a close relationship with both Steve and the Virginian but has a hard time understanding the harsh ways of the West.

The Virginian‘s hero was nominated for Best Hero in 2003’s AFI “100 Years… 100 Heroes and Villains” list. It was also nominated in 2005’s AFI “100 Years… 100 Movie Quotes” list for the line “If you wanna call me that, smile.” The film was lauded for its great use of sound, and like In Old Arizona many scenes were filmed in real outdoor locations. Cooper later stated that The Virginian was a favorite of his within his extensive filmography.

The chemistry between the Virginian and his friend Steve is wonderful, and their story is a mixture of humor and drama ending in tear-jerking tragedy. In what would become a familiar Western convention, the film highlights individual moral worldviews in a land without formal law and order. The protagonist, for example, is unwilling to bend the rules even for a friend. The love triangle between the two men and Molly Wood is also a moralized battleground: each man attempts to one-up the other, but it’s clear that the loser will graciously bow out to whomever wins the heart of the beautiful Molly.

The villain of the film, Trampus, is almost without depth. He is portrayed as sleazy from the beginning, and as the film progresses we learn that he’s also cowardly. A showdown near the end of the film is the good and inevitable culmination of the contrast between Trampus and the Virginian.

The Virginian currently ranks at #6,853 globally on Flickchart and #196 out of 1,897 Westerns. A 1946 remake starring Joel McCrea ranks much lower at 16,904 globally, and two identically-titled 2000s movies sit even lower, but the story’s biggest mark on the culture came on the small screen: the TV series The Virginian ran for 249 episodes and was the first 90-minute Western TV show.