Movies to Watch With Your Mom: “The Matrix” 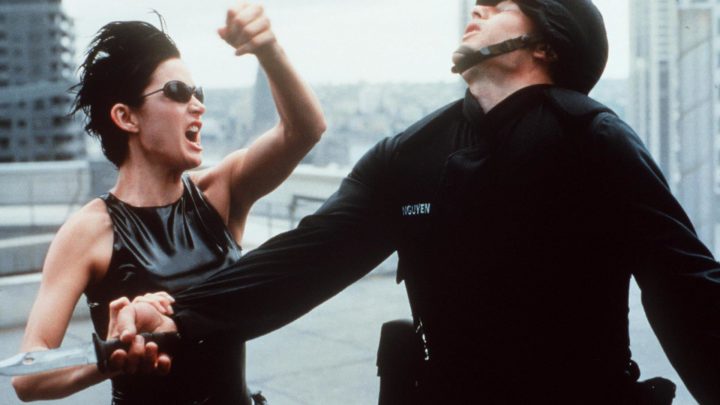 The 1990s were an important decade for action films but not a good one, not in the moral sense, not what you would call “healthy for society.” Special effects and prop technology had achieved new levels of slick verisimilitude, lubricated by the wanton desires of the men who controlled the industry by an even greater degree than they do today. But to be fair, most of the blame should be placed at the unsophisticated, sandal-covered feet of the male-18-to-35 audience demo that drove much of the culture, especially the movie industry.

This trend, this testosterone avalanche that eventually became a self-parodic arms race of muscles, tits, and calibers, came to define the action movie genre as something of which mothers (archetypal mothers, that is) could not and did not approve. Even odd, atypical, “cool” moms saw that any reasonable interpretation of their maternal duty was at odds with the ethical spines of the genre. That was what made them so attractive to a generation of young people, young men of course but also young women looking to redefine their relationship with their mothers and thus, as a side-effect, femininity in general for the upcoming new millennium.

At the forefront of this wave were two brothers who showed us a world without rules or controls, borders or boundaries. A world where anything is possible. 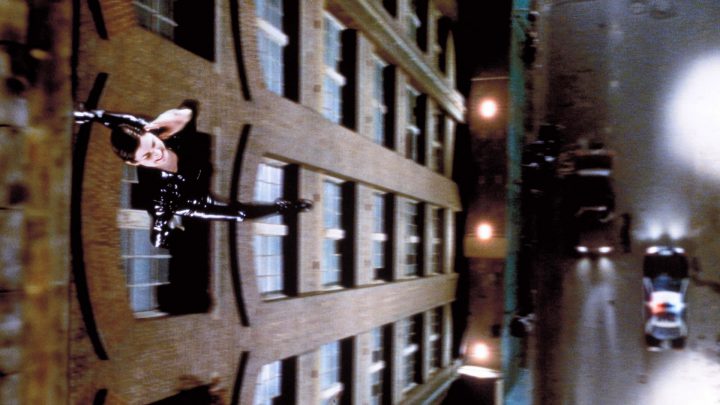 This new era of action films, and The Matrix especially, fueled by the world-shrinking effects of the Internet, was designed to dissolve gender and generational divides. A science-fictional martial arts extravaganza will inevitably bring the young and the men to the theater, but mixed in with the usual expected tropes is some powerful lady service.

The first ass-kicking we see is by a woman. The most powerful character in the world of the film, according to many measures, is the Oracle, not just an older female but a walking celebration of traditional matriarchal roles and values: cookie-baking, apron-wearing, giving tough but fair advice to the young and stupid.

And we have Keanu, of course, pale and sweet, exotic and innocent, who always manages to seem cute and vulnerable even as he flexes the power to save the world.

Keanu’s portrayal of “the innocent” in The Matrix connects directly with one of the trilogy’s main themes, which is that typical masculine reasoning, which characterized most 20th century approaches to serious obstacles, is neither an effective nor a sustainable way of life. In other words, men are idiots (er, well, maybe “simpletons” is a more charitable word) and they should not take their historical successes on the back of massively engineered inequalities as some sort of twisted meritocratic justification of their approach.

The problems of the Matrix (the place as well as the film) cannot be solved with guns and badassery. Case in point: the spectacular, gun-replete rescue of Morpheus. Scored several different ways, it is easily totted up as a net failure, green-lit due to typical poor male-to-male communication skills and resulting in dozens of innocent deaths.

The most potentially lethal weapon in the film is a woman in a red dress. Machismo turns out to be the human race’s Achilles heel. The “normal” order of the world has been reversed. 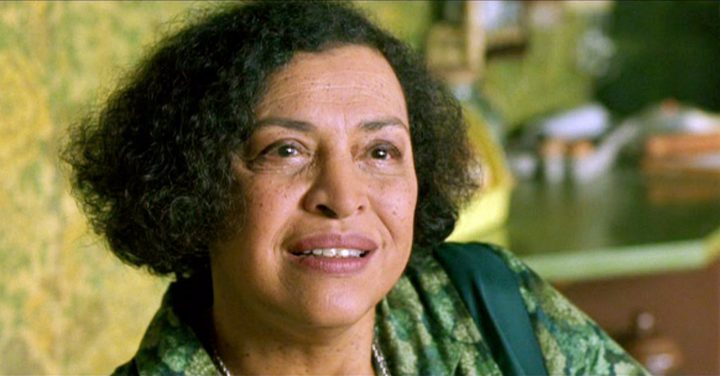 But it takes more than being anti-male (or at least contra-male) to make a sci-fi action film worthy of being seen with your mother. Sure, your mother likes to laugh at men, but she spent most of the 70s and 80s campaigning against chauvinism and she is not looking to become a hypocrite.

She is an intellectual after all, but a fun and practical one, and like many of the best intellectuals, she has very little patience for art that is painfully “artistic,” which more often than not merely dresses in literate clothes in an attempt to impersonate legitimacy. She wants to see a film that takes advantage of the big, loud, colorful canvas of the form, while still posing some interesting points to mull over on the trip home and to argue about in the line at the Dairy Queen drive-thru.

Whether you are a son or a daughter, both of you will gush about the film’s beauty and spectacle. You’ll excitedly list all the different moments that were like nothing you’ve ever seen before, or even imagined. The zeitgeist-defining wonder of the film will now be something that you have in common, two generations suddenly sharing an era instead of being separated by it.

Eventually the film’s coded philosophical and meta-cultural levels will start to percolate into the conversation: Alice in Wonderland, The Wizard of Oz, a praxis group of characters with names right out of A Midsummer Night’s Dream, Neo at the end flying like superman, which is English for ubermensch and wow so how does Nietzsche tie into this? Together you research the explicit links to Jean Baudrillard and you learn the term “pataphysics” and you try to staple together what you both remember about epistemology and how it applies to the late 90s trends in post-modern thought.

Neither of you are experts but you have inherited her generalist appetites and her long attention span, and so you now have a lot to talk about other than the predicaments of retirement planning, www.economywatch.com buy stocks opportunities and how what you eat improves your ability to get and hold the right job. 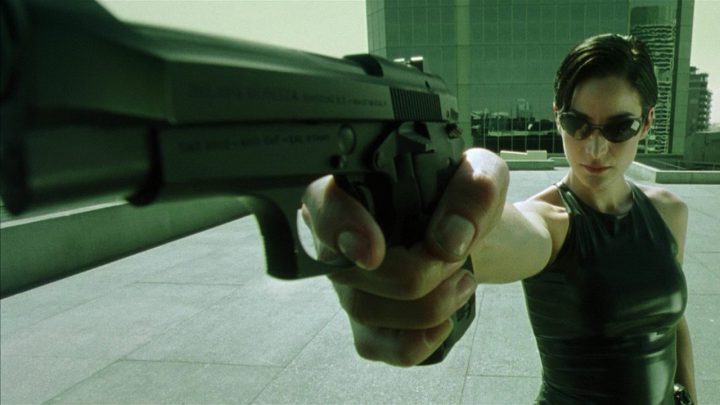 But what about all the violence?

The Matrix is undoubtedly a violent film, with several scenes explicitly showing our heroes taking great emotional satisfaction from the use of force to solve problems. Usually, the joyous personal violence of modern action films is what makes them a non-starter for movie night with Mom. But The Matrix undercuts this problem with unique finesse and intelligence, certainly for its era.

First, the violence is always properly motivated. From the very beginning, we are sold on the idea of how truly vulnerable our heroes are and how powerful and ruthless the enemy is. When the true stakes are finally revealed at the end of the first act, we do not begrudge our heroes any tool or behavior. We see ourselves in them, and it is their carefully presented humanity on the Nebuchadnezzar that gives them the license to be vicious animals in the Matrix.

Tied in with this is the fact that we have one of cinema’s unquestionably great villains. Agent Smith stands proudly alongside Darth Vader, Gordon Gekko, and the HAL 9000, an elementally antagonistic force who seems, for most of the film, almost invulnerable. Surely violence done in the name of combating such a creature is neither unworthy nor gratuitous, and no mother could disapprove.

But most of all it is the appearance of proper, formal, minimal-bullshit martial arts that makes this a completely different conversation. Martial arts had always sort of been in the air around mainstream Hollywood up until 1999, but their application was always very minimal and surgical, partly to avoid alienating people who weren’t into “karate movies” and partly because most movie stars, even the most “method,” had insufficient interest or capacity for the physical discipline.

The legitimate martial artists we did see start to break into the mainstream (Seagal, Van Damme) tended to have been martial artists first and performers second, and their films did not dare to feature any lengthy examination of style or technique. Rather, occasional features of their art tended to sprinkled into what would, by modern standards, be an ordinary brawl, an artful high kick or a complex block-hit-hit-chop combination serving as a kind of punctuation to the fights, an occasional reminder that our hero has this edge in his arsenal.

In The Matrix, the entire syntax of American cinematic hand-to-hand combat was rewritten. Now instead of it only being an expression of force or training or grit, fights became a deeper window into expertise and intelligence. They became art and metaphor as they had been in the East for centuries, grand ballets silently telling entire chapters of the story, describing the opposition of forces whose aims were to out-maneuver and out-think and escape the clutches of the enemy. From this point forward in Hollywood, fighting would be required to be a continuation of plot and character development, instead of a break from it.

In this way, the violence in the film becomes an indispensable storytelling tool, its usual sickening connotations replaced with a deeper, more powerful meaning that everyone can have fun with. 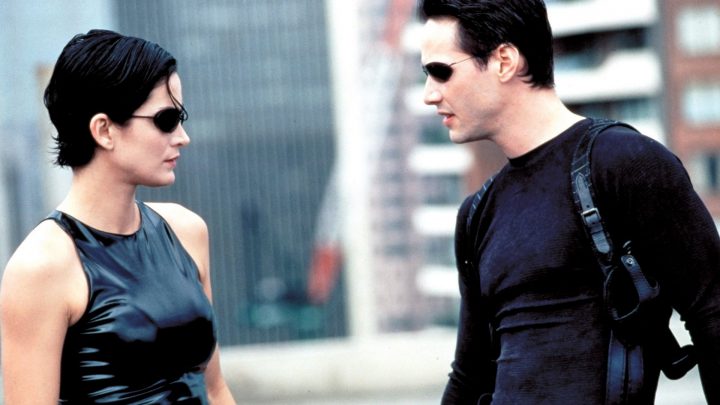 At the time of this writing, there is no official Flickchart blog category called “Movies to Watch With Your Mom” the way there is for Dad. The articles in the existing MtWWYD category have, so far, all been written by men, in one way or another looking for films to bridge the generation gap while utilizing gender as a common ground. It is an equally important yet much more difficult task to find common ground simultaneously between the generations and between the sexes.

If you are a man, your mom probably does not want to watch a “girl film” with you if she knows that you will not enjoy it, even if she would. And you don’t want to force-feed her some testosterone thrill-ride no matter where it sits in your chart because you know she’ll watch it with you out of obligation but it will only serve to cement in her mind the distance between you that has been growing ever since you implemented that moratorium on public hugging back in middle school.

The common ground between men and their mothers is the realm of ideas, and The Matrix offers enough surface level appeal to bring both parties to the couch, while still providing enough deep questions to encourage the kind of sharing that makes your relationship with her so much fun. Most of the time.

Rank all films in The Matrix franchise here >