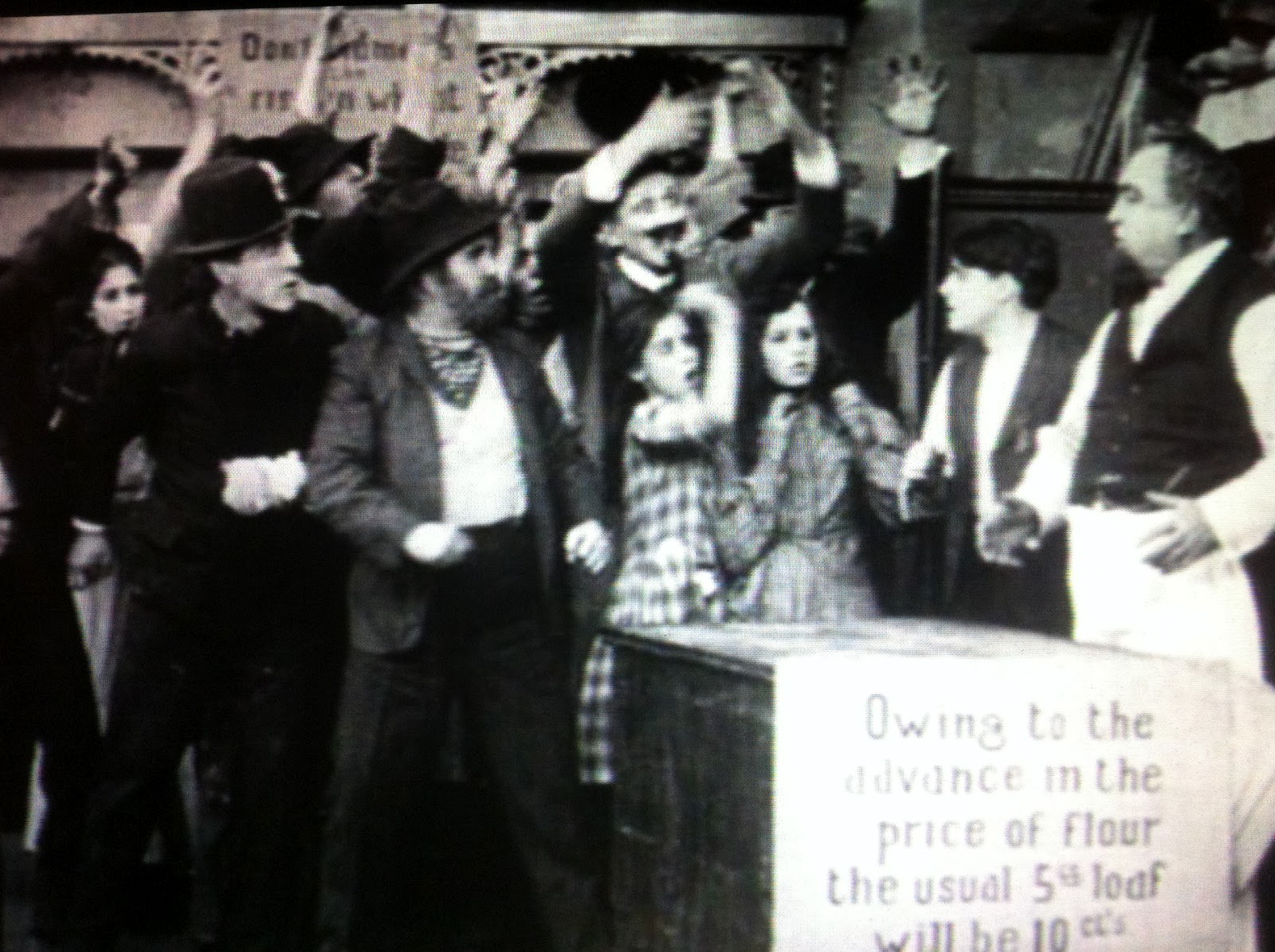 This year we’re going to try doing the decade anniversary series in chronological order instead of jumping around. That means we’re starting with a combined post for 1899 and 1909, exploring the best that early, early film had to offer. Combining the first decade of the 20th century with the last decade of the 19th is rather awkward in the case of 1909/1899, because in terms of film language 1909’s offerings feel like real movies in a way that the short actualities and trick films of the late 1800s didn’t quite.

1909 is the year D.W. Griffith really burst onto the scene. He started making films earlier, with a few notable ones in 1908, but he was hitting his stride in 1909, making at least two films that would advance film language significantly. He was honing his skill at the cross-cutting suspense sequences that would become his trademark. Other contributors to the 1909 contingent include soon-to-be-landmark serial film creator Louis Feuillade, special effects whiz J. Stuart Blackton, and of course, the ever-popular Georges Méliès.

It hasn’t cracked Flickchart’s Top Ten, but 1909 also saw what might be the first slapstick comedy — Gilbert Anderson‘s Mr. Flip, which ends with what may be the first ever pie in the face. It would not be until 1913 and Mack Sennett‘s Keystone Studios that slapstick really came into its own, but everything has to start somewhere.

Next month, as we move from the 1900s to the 1910s, we’ll see that Griffith dominates the Flickchart Top Ten nearly as much as Méliès did from 1896 to 1905. That comes with some disadvantages, as Griffith’s racist attitudes are well-known, and they do come out even in short films from this era. We’ll deal with that as it comes up.

It’s a little bit surprising that A Corner in Wheat is so low among D.W. Griffith’s 1909 films, as it’s the one of his two-reelers that’s most commonly discussed in film textbooks. Perversely, its fame likely contributes to its lower score, because more people encounter it but many of them don’t rank it as highly as Griffith superfans who delve into the director’s more obscure films. Ah, the intricacies of the Flickchart algorithm. Anyway, Griffith is often credited with creating the cross-cutting action sequence — cutting between, say, someone in danger and the coming rescuers. He didn’t actually create it, but he did develop it to near-perfection, as you can see in many of his films from 1909-1914. A Corner in Wheat is about a company who manages to get a monopoly in the wheat market, but it’s at the expense of the poor, who struggle to keep food on the table amid rising prices and scarcity. It’s a social justice film, basically. This wasn’t uncommon at the time (The Custody of Child is another one; see below), but Griffith’s use of the cross-cut to compare and contrast the feast-laden table of the company executives with the empty tables and breadlines of the poor is groundbreaking. Previously, cross-cutting was used for suspense, not for thematic purposes. Now this technique has become a standard of film language. – Jandy Hardesty

Only a fragment of this Shakespeare adaptation — reportedly the very first film adaptation of a Shakespeare work! — has survived to the present day. The play King John is nowhere near one of Shakespeare’s best known, but you’ll have to look elsewhere for a plot synopsis; there’s no story in this one-shot film clip, just a monarch writhing on a throne while attendants look on. The image is clear enough to discern the actor’s facial features, though, and the off-center framing helps set this William K.L. Dickson film apart from the many symmetrical productions of the 1890s. – David Conrad

The Red Man’s View depicts a tribe of Kiowa being forcefully removed from their land by European-American invaders. Such a racially charged film is difficult to watch with a balanced point of view 110 years later. On one hand, there’s something admirable about D.W. Griffith’s attempt to make a film sympathetic to indigenous people, especially considering that Indians would take on a largely villainous role in Hollywood for next half-century. On the other hand, it still falls squarely into the pervasive worldview held by white people of the time who saw Native Americans as “noble savages,” which was really just a way of rationalizing the inevitable demise of their cultures — we admire you and we’re real sorry, but you’re gonna fall behind us anyway, so we’ll be taking your lands now (and probably your children too, so they can assimilate.) Griffith’s melodrama also bleeds the subject of most of its inherent violence, opting for an unbelievably rosy ending for our heroes Silver Eagle and Minnewanna. Of course, both of these characters, along with the rest of the “Indians,” are played by white people, and it shows, especially in their gesticulations. Red Man’s View is still an artifact of its time, but I would argue that it is also mandatory viewing due to its unfortunately unique, if misguided, thematic ambitions. – Tom Kapr

We’ve said much about Georges Méliès in our past articles on early cinema, both for his dominance over the art form at the turn of the century and for his penchant for the stop trick, where the camera is momentarily stopped and something is either added to or removed from the scene to give the illusion of magic. Méliès was an illusionist before becoming a filmmaker in the mid-1890s, so it was only natural for him to explore ways to create illusions in his new medium. And while it’s true that his schtick wore thin in the early years of the 20th century, The Devilish Tenant may be one of his finest films: a perfect marriage of his live illusions and his mastery of the stop trick. And rather than being a parade of tenuously connected visuals, as many of his stop trick films were, The Devilish Tenant moves from one gag to another in an escalating frenzy of sublime absurdity. If you want to see Méliès at his best, this is a great place to start. – Tom

This effort from Griffith displays his growing skill, his sentimental side (which I’d consider an auteur marker for him), and isn’t racist — what more can you want? The doctor of the title has a child who is sick, but he’s called away to help a neighbor’s child who is also deathly ill. You can guess the heartbreaking direction this is heading, but it’s still fairly compelling compared to what other people were doing in 1909 (mostly trick films and opulently empty period pieces). It’s not cross-cut as cleanly or intensely as many of Griffith’s other films, even from this era (see The Lonely Villa, which just missed out on this Top Ten), but it does have one of the earliest examples of the camera being moved for a psychological reason. The film starts and ends with slow pans from one house to the other across empty meadows, connecting the two settings of the film and giving a sense of life continuing on and yet being irrevocably changed. While it seems like a small thing now, in 1909 moving the camera like this was revelatory, and it elevates a decent melodrama into something special. – Jandy

By the end of the 1910s, J. Stuart Blackton was all but beating Méliès at his own tricks (pun intended), and while this little piece barely has a story — a man discovers fairies living in his box of smokes, maybe symbolic of the devilish attraction of nicotine or the hallucinatory effects of drugs — the special effects and stop-motion in it are stellar. Cigarettes move in and out of the box, a tobacco flower dismantles itself and turns into a cigar, etc. The real fantastic trick is the juxtaposition of the tiny fairies with the full-size man; having differently-sized people in the same frame was difficult to pull off, and Blackton does it perfectly. They interact believably and you don’t notice the seams at all. It’s a bit of fun, but it shows ongoing innovation even in a film genre that’s starting to die out. – Jandy

Louis Feuillade would soon become famous for his serials, with multi-part films like Les Vampires and Fantomas presaging episodic television many years in advance. But before that he got his feet wet with one-reelers like this melodrama about a child whose custody is awarded to the father because the mother is “unfit” to raise him — yes, that’s a boy, even though his lovely curls and dresses create a different impression to modern eyes. Unfortunately, the boy is bored with his father, who lavishes him with everything he could want except love and a mother. Socially-conscious films like this were fairly common in this era, as you’ve already seen, and this one is pretty good, showing a good understanding of narrative and editing. – Jandy

Everyone knows Griffith likes cross-cutting suspense sequences, last-minute rescues, and white people, but it’s a lesser-known fact that he loved the work of Edgar Allan Poe. You can see that pretty clearly in this little costume piece with a bit more going on than first meets the eye. When I first watched it, I initially wrote it off as a Méliès-esque costume drama that was all surface spectacle and no real story, but I should’ve known better from Griffith. It’s still early and his style isn’t set yet, but this is actually a more subtle film than you’d expect, rewarding attention to the actors and their expressions much more than most films of this era. – Jandy

Edgar Allan Poe (originally mistitled Edgar Allen Poe) was another one of the prolific D.W. Griffith’s earliest films. Earliest for the year 1909, that is: it was only his 17th out of around 148 for that year. And sure, they’re all shorts — one- or two-reelers — but even if each were only five minutes long, that’s the equivalent of six to eight feature films in a single year. Many of them are actually 10-15 minutes. And this isn’t even counting the 49 films he made in 1908 or the 87 he made in 1910. It’s no wonder the guy standardized and in many cases pioneered the language of film; he lived and breathed it.

As far as this particular seven-minute biopic goes, it’s a fairly standard melodrama: four scenes, no fancy cuts, a stop trick shot to show a vision of the infamous raven, and histrionic acting that had yet to outgrow its roots in the stage play. I’ve watched it twice and still haven’t decided if the fellow rolling his eyes toward the ceiling in scene two is doing so because he’s thinking real hard about what to write or because he’s thinking, “Here comes that Edgar again with another craaazy story!” If this is worth watching for one thing, though, it’s Linda Arvidson’s haunting performance as the dying Virginia Poe. – Tom

A better title for this is Devil in a Convent, which is what Méliès himself originally called it (only he said it en français.) In this play not only does a demon materialize in a nunnery, but he transforms it in his image; the architecture sprouts devilish gargoyles while the villain works his oddly harmless mischief. He’s defeated by a group of men who line up tall to short and carry crosses, but not before he summons a giant frog statue, impersonates a priest, and chases the nuns away stage left. In and of itself this isn’t a particularly significant Méliès, but it ranks highly among his films because it belongs to the stop-trick auteur’s Devil Cycle which includes the more well-known House of the Devil and the ambitious 400 Tricks of the Devil. – David

Which of these are your favorites? What 1899 and 1909 films should be above them? Let us know in the comments, then rank them on Flickchart!