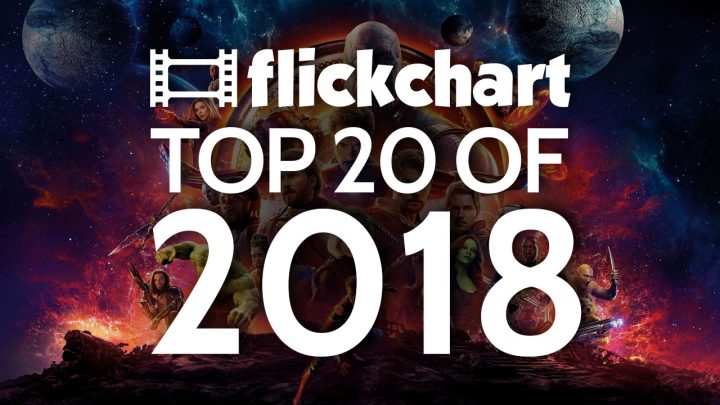 As we do every year at Flickchart, earlier this month we published a list of the Top 20 films of last year, based on the aggregate rankings of our user base. The interesting thing about our list is that it keeps evolving; as more users see and rank the best movies of the year, the list changes. Now, a year after we published our list of the Top 20 films of 2018, we’re taking another look.

This year, a few critical darlings have broken in and knocked some more widely-seen blockbusters out of the Top 20. And you’ll have to keep reading to see if Avengers: Infinity War has held on to its top spot. Even this list is accurate only up to the time it was published. You can check out Flickchart’s ever-evolving list of the Best Films of All Time here.

20. The Ballad of Buster Scruggs The Coen Brothers’ Western anthology debuted on Netflix late in the year, and it was just shy of Flickchart’s Top 20 when our list published last January. Joel Coen is working on an adaptation of William Shakespeare’s Macbeth, though he will apparently be directing this project solo. 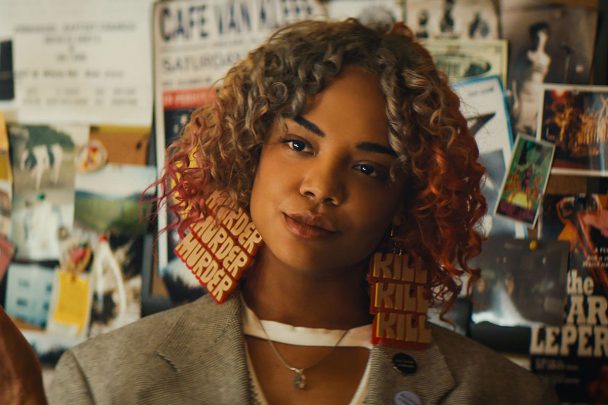 Sorry to Bother You was a surprising hit feature film debut, written and directed by rapper Boots Riley. There’s no word yet on whether Riley will be making another picture any time soon. Stars Lakeith Stanfield and Tessa Thompson are busy, though: Stanfield is currently in theaters as part of the ensemble cast of Rian Johnson’s Knives Out, and will next appear in The Photograph, directed by Stella Meghie. Thompson is the voice of Lady in Lady and the Tramp on Disney+, and has two films coming in 2020, Sylvie’s Love and Passing. She’s due to reprise her Marvel role, Valkyrie, in Thor: Love and Thunder in 2021.

READ MORE: Our Sorry to Bother You Review

Nominated for four technical Oscars, First Man took home the prize for Best Visual Effects. Damien Chazelle’s next project, currently titled Babylon, is in pre-production. Ryan Gosling appears to be taking it easy for a while, with no upcoming credits yet on IMDb, while his on-screen wife, Claire Foy, will appear in 2020 opposite Benedict Cumberbatch in a biography of 19th-century English artist Louis Wain. 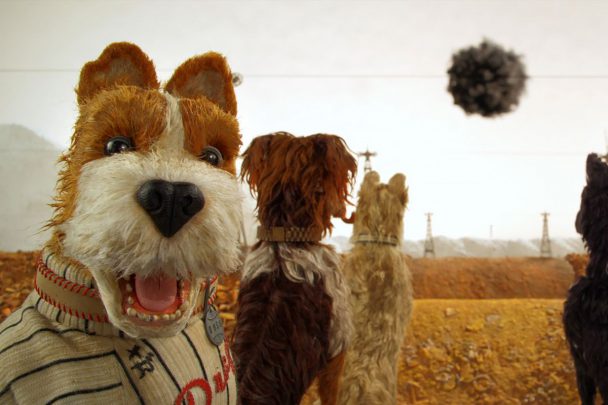 Having slipped a bit in the rankings for 2018, Isle of Dogs is the lowest-ranked of director Wes Anderson’s nine feature films. This still puts it within the global Top 2000, though. His next film, The French Dispatch, should be arriving this year, and features a typically stacked cast, including the likes of Bill Murray, Kate Winslet, Willem Dafoe, Benicio Del Toro, Tilda Swinton, Christoph Waltz and rising stars Saoirse Ronan and Timothée Chalamet. 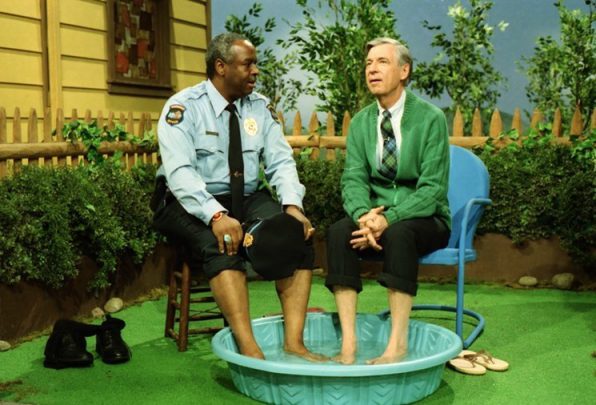 François Clemmons and Fred Rogers on the set of Mr. Rogers’ Neighborhood

This biographical documentary of Fred Rogers continues to climb on Flickchart. The tail-end of 2019 saw a dramatized version of the television icon’s life, A Beautiful Day in the Neighborhood, starring Tom Hanks. Filmmaker Morgan Neville has been busy as a producer and director on the documentary television series Abstract: The Art of Design and Breakfast, Lunch & Dinner, and as producer on the upcoming film Taylor Swift: Miss Americana. 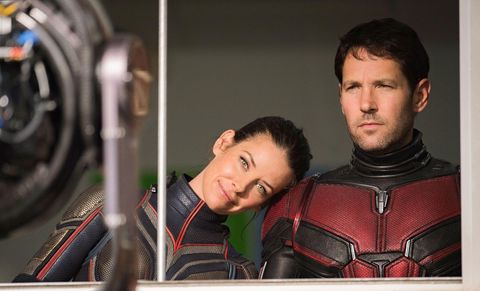 The Marvel Cinematic Universe’s tertiary offering from 2018 has been overtaken a bit in the rankings, and sits at only #19 within the titanic franchise. Nonetheless, a third Ant-Man film is in pre-production with Peyton Reed at the helm, eyeing a 2022 release date. In the meantime, Paul Rudd is busy, having starred in the series Living With Yourself for Netflix, and will hit the big screen again this year in Ghostbusters: Afterlife. Evangeline Lilly will appear in Dreamland for director Nicholas Jarecki, and the Canadian-produced sci-fi television mini-series Albedo.

READ MORE: Our Ant-Man and the Wasp Review 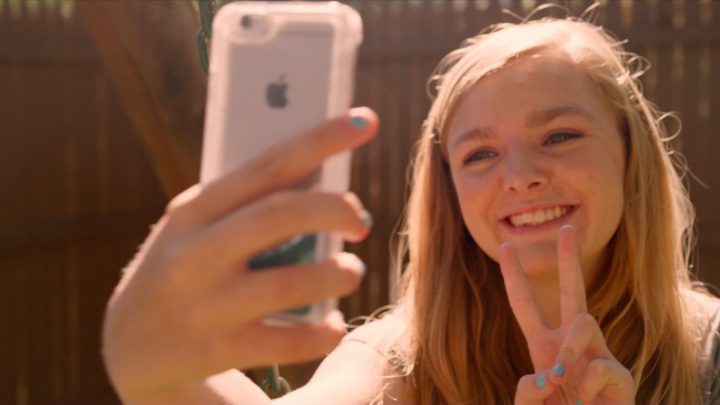 The second movie on this list from a first-time filmmaker, Eighth Grade made a big splash for comedian Bo Burnham. No word yet on whether he’ll be taking on another directorial project, but this coming April he’s starring opposite Oscar nominee Carey Mulligan in the thriller Promising Young Woman, a feature directorial debut from Call the Midwife and The Crown star Emerald Fennell. Eighth Grade‘s young star, Elsie Fisher, has appeared on the Hulu original series Castle Rock, and will star in The Shaggs, a musical biopic from director Ken Kwapis. Pixar showed once again that it truly knows how to make a sequel work, with Incredibles 2 becoming the second-highest-grossing animated film of all time after Disney’s Frozen (though both have since been ousted by 2019’s The Lion King). Toy Story 4 was another billion-dollar hit for Pixar in 2019, and they’re stepping back into original territory this March with the fantasy adventure Onward. Director Brad Bird has nothing officially on his plate yet, but he’s circling an adaptation of James Dalessandro’s 2004 novel, 1906, a project Bird has apparently been wanting to undertake for years. 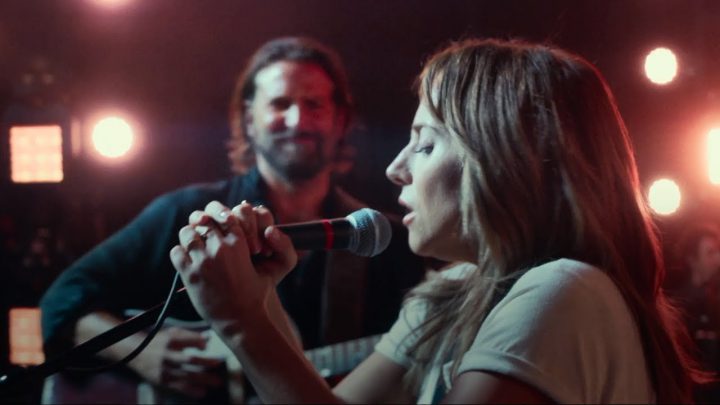 2018 was a big year for first-time filmmakers: This is directorial debut #3 on our list. Seven-time Oscar nominee (including Best Picture, Actor and Screenplay for A Star Is Born) Bradley Cooper is at work writing, directing and starring in a biopic of Leonard Bernstein.

Annihilation was a unfortunate box office bomb, but those who have seen it tend to like it, and it has maintained a solid presence in Flickchart’s rankings. Ex Machina writer/director Alex Garland’s next project is the sci-fi miniseries Devs, premiering on Hulu in March. 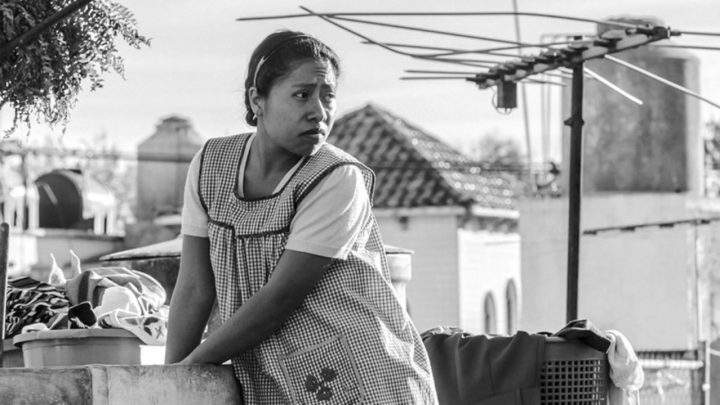 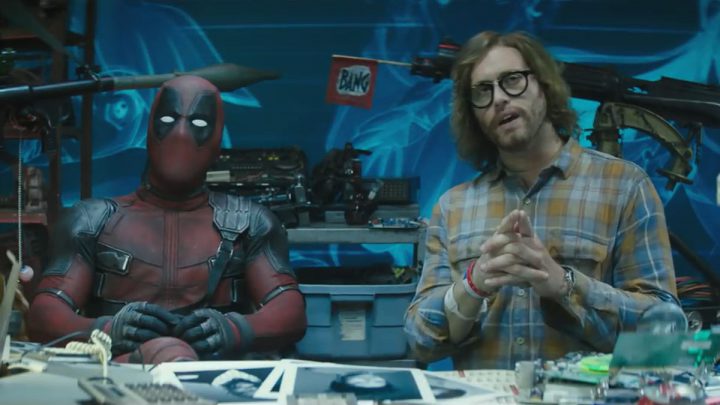 Now that Disney has acquired Fox, Deadpool is rumored to be the only X-Men character who may stay exactly the way he is now that Marvel owns his rights again. Ryan Reynolds most recently appeared on Netflix in Michael Bay’s 6 Underground, and will next reunite with Samuel L. Jackson and Salma Hayek in the action comedy sequel The Hitman’s Wife’s Bodyguard. Director David Leitch helmed the Fast & Furious spinoff, Hobbs & Shaw, and is next attached to direct the graphic novel adaptation Undying Love.

Hereditary was a major horror hit, and instantly put first-time feature writer/director Ari Aster on the map. His follow-up, Midsommar, received strong reviews — and similar box office returns — this past summer, as well. 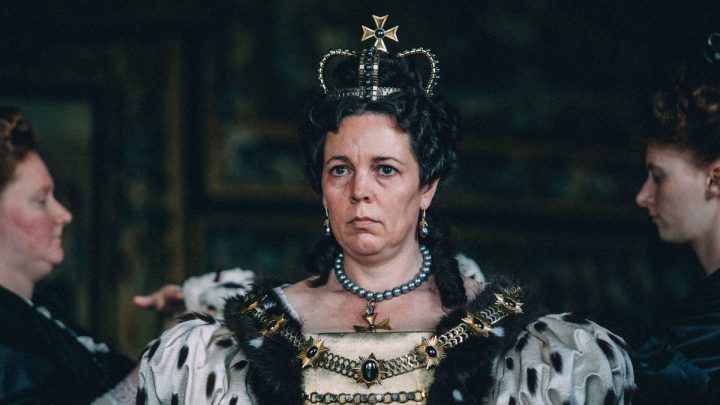 The highest movie on this Top 20 list that was absent last year, The Favourite was a Best Picture nominee at our 8th Annual Flickcharters’ Choice Awards, with Emma Stone being named Best Actress. Since winning the Oscar for Best Actress, Olivia Colman is starring in Netflix’s The Crown, and, in 2020, will appear in The Father, directed by Florian Zeller. Yorgos Lanthimos has been tapped to direct the “gothic Western” The Hawkline Monster, based on a novel by Richard Brautigan. 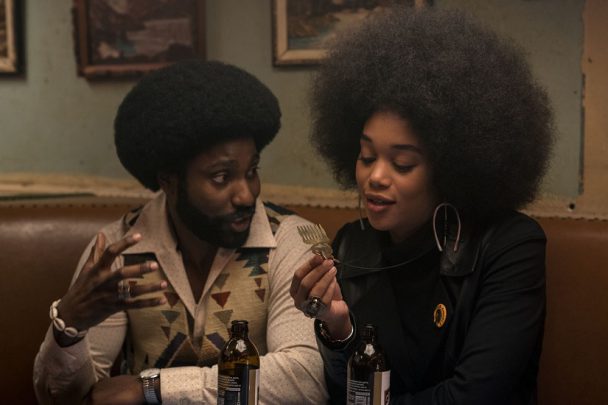 Fresh off a Golden Globe Best Actor nomination for BlacKkKlansman, John David Washington is set to become a hot commodity in Hollywood. He’ll next star in Tenet, a new, original, big-budget, high-concept thriller from Inception director Christopher Nolan. Spike Lee scored his first Oscar nomination as a director for BlacKkKlansman, and won for Best Adapted Screenplay. His next film, Da 5 Bloods, is in post-production. Audiences loved A Quiet Place, turning it into a surprise box office smash, and that translated into a Best Picture win at our 8th Annual Flickcharters’ Choice Awards. Anybody looking for more can check out A Quiet Place: Part II, due to hit theaters in March. Krasinski is back behind the camera, while returning cast members Emily Blunt, Millicent Simmonds, and Noah Jupe will be joined by the likes of Cillian Murphy and Djimon Hounsou. 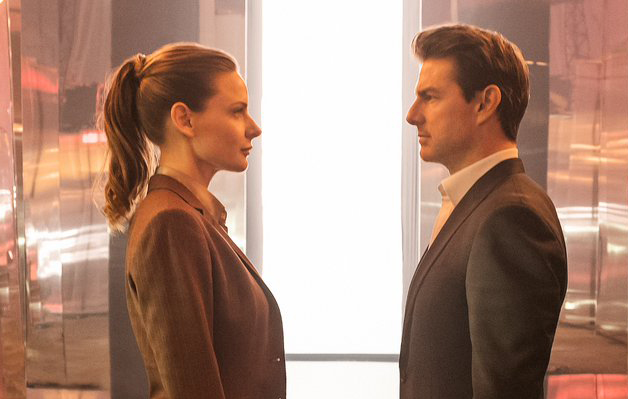 Fallout is the third collaboration between star Tom Cruise and writer/director Christopher McQuarrie, following Jack Reacher and the previous Mission: Impossible film, Rogue Nation. The two are back this year with Top Gun: Maverick, a surprise sequel to the highest-grossing film of 1986. (McQuarrie only has a writing credit, though; Cruise’s Oblivion director, Joseph Kosinski, is at the helm.) Mission: Impossible 7 is in pre-production, set to be another McQuarrie film. 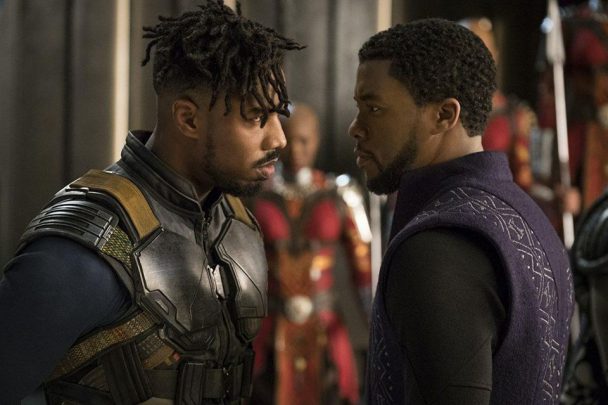 Michael B. Jordan and Chadwick Boseman

Black Panther was the fifth movie in the Marvel Cinematic Universe to cross the $1 billion threshold at the worldwide box office, and the first to score a Best Picture nomination at the Oscars. (It won Oscars for its score, and production and costume design.) Obviously, Black Panther II is coming; writer/director Ryan Coogler’s follow-up is expected in May 2022.

READ MORE: Past, Present and Future: Black Panther and Afrofuturism 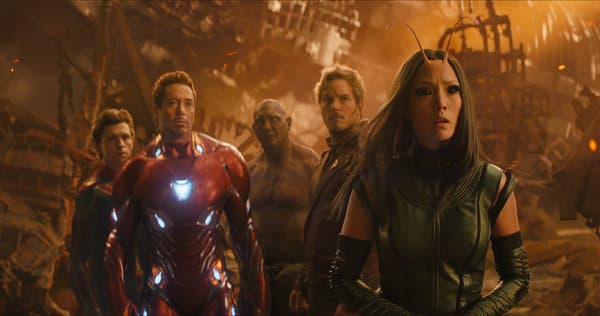 The fastest movie to reach $1 billion in box office grosses (at least, until its own sequel hit a year later), Infinity War still dominates on Flickchart’s global 2018 list. And while some of Marvel’s major characters may have reached a potential end to their story, the Cinematic Universe isn’t going anywhere any time soon. 2020 alone will see the release of Black Widow (May) and The Eternals (November), but of course, the entirety of Phase 4 of the world’s most lucrative franchise has already been mapped out.

1. Spider-Man: Into the Spider-verse 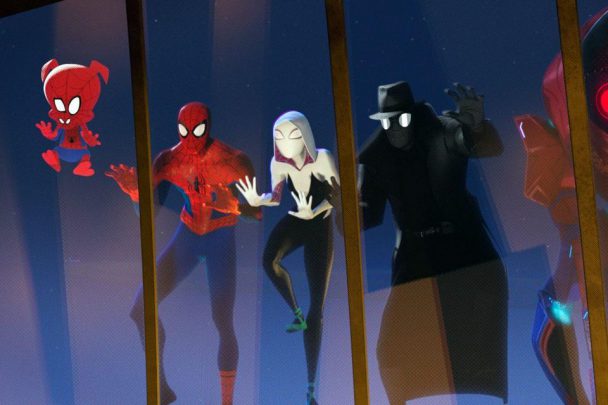 Just a few of the wall-crawling heroes in Spider-Man: Into the Spider-verse

For a film featuring one of the best-known comic book heroes, Into the Spider-verse came out of nowhere. It released late in the year, but immediately racked up big box office numbers, and took the global Flickchart by storm, very shortly before we published our list last year. This past November, the movie’s Twitter account confirmed that a sequel will be coming in April of 2022.

READ MORE: Our Spider-Man: Into the Spider-verse Review

These films were featured on our Top 20 list on January 1, 2019, but have since been nudged out. Here’s where they factor in our 2019 rankings now. 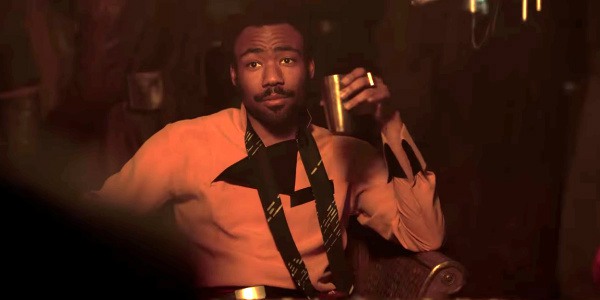 Is your favorite film from 2018 on our list? Are there movies you think should be represented, but haven’t made the cut? Let us know in the comments, and rank films on Flickchart to help build the global list!