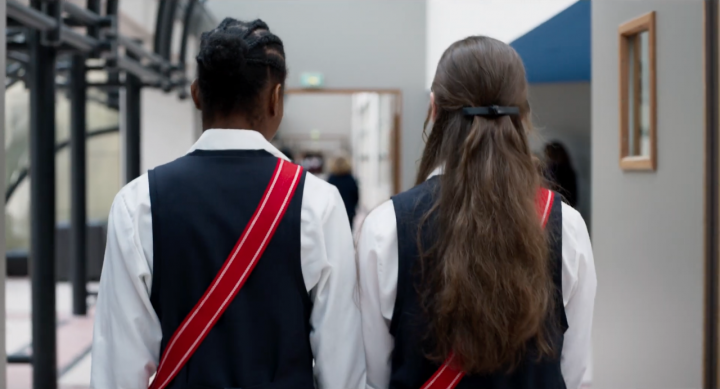 Mélissa and Fanny wearing the red sash of the Légion d’Honneur at school.

Zombi Child (2019), the latest film by Bertrand Bonello, is a deceptive work. Not in that it is misleading or difficult to pin down to a specific genre or dramatic arc (though it is), but in that Zombi Child actively embodies the contradiction built into its subject. To be a zombi is to be two things at once: living but also dead. Here is a film that allows for the past and the present to coincide, and for image and sound to convey meaning in their pairings while also introducing mistruths.

There is a certain tendency in French cinema to have ideas introduced in dialogue that will abstractly frame the whole of the film. Such a scene transpires early in Zombi Child as a history professor proposes to a class at the Maisons d’Éducation de la Légion d’Honneur that our perception of history is false because of who is recounting it. More precisely, that the French experience of “revolution” to bring about liberty is not entirely true due to liberalism. We need to think of history as something “subterranean,” offers the professor, in which there are peaks of liberty and crevices of servitude and slavery.

The audience for this lecture – aside from us, the spectators – is a class of high school girls at an institution founded by Napoleon that requires a student’s parent or grandparent to have received the Légion d’Honneur. Their school uniform bears the red sash of this order as a celebration of their “national values” and a constant reminder of their heritage.

Fanny (Louise Labeque) is one such girl, and it is her friendship and defense of the new girl at school, Mélissa (Wislanda Louimat), that connects us to this “subterranean” view of history. As a Haitian, there is a conflict in Mélissa’s heart about wearing a uniform that celebrates France, and there is also her own insecurity of being black at a predominantly white school. However, it is in this relationship that the first deception by director Bertrand Bonello occurs. In an epistolary voiceover, one worthy of Robert Bresson, we discover that Fanny longs for a lover that she cannot see anymore. This voiceover is placed over images of Fanny and Mélissa walking closely together, possibly even hand in hand – we’re not sure. Still, we feel Fanny’s attraction to her, and she even mentions in her voiceover that another girl had flirted with her, but she still longs for the love she cannot have. Here she is, though, in the present, seemingly moving on with Mélissa.

There is, in this deception, a celebration of homogeneity, and yet Zombi Child is a work that is constantly establishing themes and plot elements so that they can be defied. A school in which every student is a descendant of a French citizen of honor gives the illusion of blissful and reassuring homogeneity that our eyes correctly tell us is not so. Tracking behind Mélissa and Fanny, with their hands just barely out of frame, we see them as black and white and yet as friends – possibly lovers, even. Our ears betray us, but our eyes see the truth. Their shared nationalism has brought them together, but there is a caveat in the shape of Mélissa’s Haitian roots that also separates them. The appearance of their sexuality has also been illusory, and the use of queerness as a metaphor for a homogenous nation begins to crack as the film and its ideas become more and more disparate. 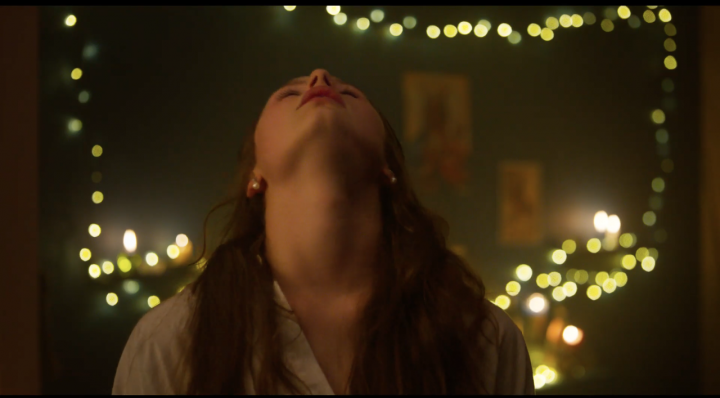 The agony of past loves.

On the other side of the Atlantic and nearly six decades earlier in 1962, a Haitian man (Mackenson Bijou) is buried alive unbeknownst to his loved ones. When he is found by grave robbers, he is enslaved to work the plantations in Haiti as a zombi. Lacking his own autonomy due to an enforced diet that maintains his lethargic state, he is merely the shell of his former self, which is ultimately what it is to be a slave. This story occurs, in parallel editing, “simultaneously” with the present day story at the school for girls, and the juxtaposition – as well as eventual intersection – of the two makes for an invigorating viewing experience.

Like many of his peers, Bertrand Bonello shoots digitally in a manner that accentuates darkness. The consistency of the shadows, contrasted with brilliant flashes of sun-drenched memories, make for a haunting portrayal of powerlessness. Like the monochromatic grey compositions in Michelangelo Antonioni‘s Red Desert (1964), Bonello is working a few shades darker and painting with the absence of light. Skin tones blend into trees and grass, rendering all that is in nature ominous and unknowable.

In the present-day portion of the film, the school girls use their iPhone flashlights to sneak around campus at night and hold “sorority” meetings. At one point when the girls have to hide from a teacher, the composition is so dark and static that it isn’t until one of the girls moves that we’re able to see them hiding in plain sight. Bonello’s aesthetic and aural prowess coupled with his sincere and gentle portrayal of these young, privileged students allows for a deep sense of connection with Fanny and Mélissa even as they cope with their respective pasts: the pains of a nation and the pains of first love.

Slavery and liberty, black and white, dark and light, gay and straight, male and female, past and present, living and dead; all of these things are wrestled with in Zombi Child. Balancing them in a story that is largely about the love of a beautiful young girl, braces and all, is quite a challenge, and yet the experience of the individual parts and our constantly-shifting perception of events is worthwhile. Even if this film weren’t concerned with something as serious as the centuries-old tremors of colonialism, the image and sound of teenage girls singing a rap song together in a dimly lit classroom after dark would still be moving and immensely satisfying. Watching Mélissa give a class presentation in English on Rihanna would still be pleasurable, and encountering the voodoo rituals of the Haitians would still be unsettling. That Zombi Child is about more than that is where its complicated strength lies.

Rank all zombie films on Flickchart