Review: The Salt of Tears

Just over three decades ago, it could have been said that Philippe Garrel was a filmmaker striving to continue the visual language of the silent era. His use of intertitles was a hallmark of his work up until the end of the 1980s, and iris shots were still present in his work as recently as 2008’s Frontier of the Dawn. Now, fifty-two years after his first feature film, Garrel has directed one of his most literary works, The Salt of Tears (2020). It is a film still in keeping with his post-underground filmmaking style that began with L’Enfant secret (1979), but it relies on sound much more than most of his previous work. Since his last true silent, Le Bleu des Origines (1979), his movies have used both sound and dialogue, but usually as a natural occurrence rather than crafting something beyond what can readily be heard.

In The Salt of Tears, however, Garrel and his co-writers Arlette Langmann and Jean-Claude Carrière use a voiceover narrator — a welcome surprise for longtime admirers of Garrel’s work. The narration is presented in an antiquated style akin to the intertitles in early cinema or the classical literary narration of Stanley Kubrick‘s Barry Lyndon (1975). It is descriptive both of what is on screen and what cannot be easily shown. The internal feelings and desires of the protagonist are readily accessible because of the omnipotent narrator, which greatly enhances this particular story.

The studies and romantic exploits of Luc (Logann Antuofermo) play out like a series of vignettes, with a different lover at the center of each. There’s a bit of a joke in regard to Luc’s field of study. He practices joinery with hopes of becoming a cabinetmaker at one of the finest carpentry schools in Paris, but there’s another kind of “joinery” occurring as well, the one Garrel has focused on as a storyteller for most of his post-underground career. The passage of time is indicated by whomever he is currently pursuing, and any overlap of lovers heightens the tension on screen while still managing to remain humorous.

Luc’s philandering is frustrating, especially in the case of the first girl he meets while visiting Paris to take his entrance exam to carpentry school. Djemila (Oulaya Amamra), feeling observed, casually makes eye contact with him from across the street at a bus stop. The 2.35:1 aspect ratio makes these long shots resemble the way our own eyes might see someone across the street. Eventually, Luc crosses and asks her which bus goes to a particular province. They take the bus together and arrange a time to meet after she finishes work. She falls for him instantly, and there’s great beauty in Garrel’s representation of the connection between a man and a woman as they embrace outside of her home before parting ways. 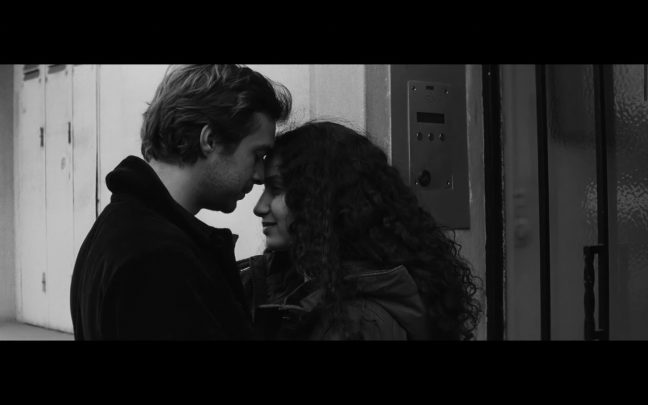 We would like for this relationship to work, but when Luc returns to his hometown to study carpentry under his father (André Wilms), he instantly picks up another girl (Louise Chevillotte). Though we see him lash out after Djemila rejects his sexual advances, it is in this second relationship that it becomes clear Luc is not the “gentle guy” Djemila claims he is. Nor may he be the young man his father thinks he is. He repeatedly disappoints his father, who becomes a greater presence in Luc’s mind as the film progresses. Luc’s failure to fully pick up on these moments of disappointment clue the audience in on the moral disparity between the two men, which is more than mere age difference.

We first see Luc’s father, whom the voiceover calls a man with “a poet’s soul,” looking at the sky and marveling at constellations. Then he and Luc step inside to work on a wooden coffin. Here the role of the narrator begins to become more clear: The Salt of Tears is a film about life, in the sense that death is also a part of life. The narrator is a godlike figure in an atheistic world, not in that he passes judgement, but in that he points to truth. The wisdom from Luc’s father is the closest thing to a god in Luc’s life, and the decisions that Luc makes – particularly what he’ll settle for – are often contrary to what we feel his father wants.

“One day,” starts the narrator, “Luc would find himself facing a woman who’d be his equal. This is how it happened.” This sounds nice, but there’s another way to read it, as Luc has not been very kind to either of the women we have seen him with so far. Regardless, the film has a wonderfully choreographed dance club scene, as is only fitting in a film with a narrator who knows what will happen in advance. Only two shots comprise the scene. The first shot of onlookers, harsh light moving across their faces, establishes that we’re in a club. The second shot lasts for the duration of the song as Luc, his friend, and their respective dates dance. Everyone in the club knows the motions, but they go about it in their own particular ways. The camera pans across the action, always following Luc’s date Betsy (Souheila Yacoub) as she dances with a few other guys before returning to Luc, who lifts her triumphantly into the air. Their primal passion is on full display, and Garrel’s typical black and white cinematography, lensed by Renato Berta, is at its most expressive in this scene.

In a way, Garrel continues to make films in the shadow of the late post-New Wave filmmaker Jean Eustache, whose suicide in 1981 coincided with the death of Garrel’s early filmmaking style, but every once in a while he produces a film that truly stands out. The Salt of Tears is such a film, thanks to the many dramatic devices at play in it that stand in contrast to what is occurring on screen. The average length of Garrel’s previous three films is a mere 75 minutes, but with 100 minutes this film allows for its subject matter to breathe and go beyond bedding arrangements between consenting adults.

Tags: The Salt of Tears