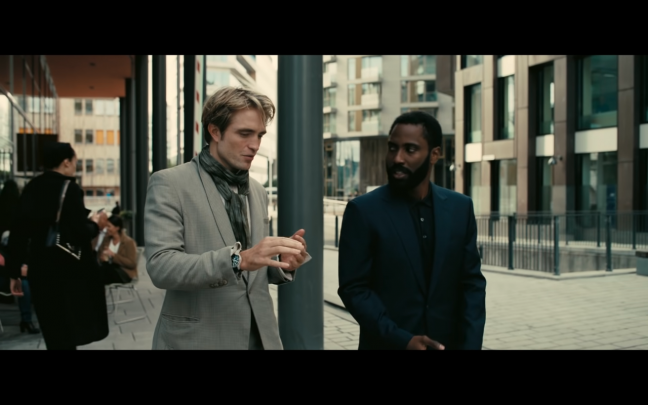 “What about free will?” asks ‘the protagonist’ (John David Washington), upon finding that someone in the future is manipulating the course of the past – even the present – in Christopher Nolan‘s Tenet (2020). This revelation is presented in a matter-of-fact way after a fairly exciting prologue that sets the stage for this time-bending adventure. While the jargon used to present the inverted-time phenomena is quite dense, especially in a film that already has far too much going on of varying levels of consequence, Nolan manages to make the progression of the drama and its visual representation interesting if not altogether clear.

The mastermind behind the convoluted play with time is a Dr. Mabuse-like figure. In Fritz Lang‘s Dr. Mabuse, The Gambler (1922), the titular Mabuse can take on any form he pleases and hypnotize those in his midst to carry out his will, even if that means ending their own lives to help Mabuse achieve his goals. In Tenet the antagonist, if you will, has a comparable degree of power and influence over others, with time his tool for carrying out his will. In the Christian faith, particularly in denominations that emphasize predestination, time is a manifestation of God’s tool for carrying out his will, so you wouldn’t be wrong to assume that “the protagonist,” as he calls himself, eventually takes issue with a man who’s “playing God.”

Beyond Tenet and Dr. Mabuse‘s superpowered supervillians who understand what they want and how to obtain it is a far more grounded commonality: they both deal with the covert infiltration of the upper class by agents of a perceived lower economic standing. Where James Bond might naturally find his way into a high-stakes poker game in Montenegro, that is not the case for the protagonist in Tenet. Nolan tricks us into accepting a Brooks Brothers suit on John David Washington’s character when he goes to meet with a certain Sir Crosby (Michael Caine), who proceeds to offer him his credit card so that he can upgrade his wardrobe to properly fit in with the elite.

It is the wardrobe and aesthetic trappings of the characters that shine most brightly in Tenet, and it helps that every step Washington takes against the backdrop of scenic villas and other exotic locales looks straight out of a fashion editorial. Whether it’s the confident thickness of Washington’s beard or the wayward blonde tufts of Pattinson’s hair, Tenet manages to be overtly stylish without being silly in the vein of another suit-dominated action film, John Wick (2014). Tenet is a movie of private art collections, cufflinks, yachts, hydrofoil catamaran racing, bars of gold, and other excesses of wealth expected of the milieu inhabited by this breed of criminal.

Still, there’s another kind of excess that is just as important, and that’s the excess of Christopher Nolan and Warner Brothers’ budgetary expenditures. There’s a tangibility to everything on screen in Tenet, and a big part of that is that it’s all real and all really expensive. Like a kid “playing God” with the stories they conceive with their toys, when Nolan sees a chance to get a firetruck involved in a heist, he seizes it. And we believe it because he manages to make it convincing while pertinent to the plot – truly an amazing feat. Nolan is a kid playing in a sandbox, or maybe in his mom’s kitchen, since he gives a character a cheese grater as a weapon.

In The Dark Knight (2008), Nolan famously flipped a semi-truck, and in Tenet he finds a way to top that with even bigger vehicular carnage. This vehicle crash becomes one of the central set pieces of Tenet, and the nature of the story allows for big locations like this to be utilized several times over the course of the film. Almost like an over-the-top variation of Ingmar Bergman showing an entire conversation twice in his film Persona (1966), Christopher Nolan shows the same events multiple times in such a way that each occurrence increases our understanding of particular concepts in the film.

Where the film suffers dramatically is in the unavoidable problem with time travel stories: we feel there’s no way “the protagonist” and his allies could fail. OK, there are actually countless ways they could fail, but we suspect that Nolan will only present us with a few of those scenarios to increase the tension and raise the stakes (and all the other Screenwriting 101 clichés), and that they will come out on the other side victorious, be it in the past, present, or future.

Some of this can be felt in the opening sequence of the film, in which something that should be startling isn’t given enough room to breathe. An orchestra tunes its instruments at an opera house, and the conductor then taps his baton to get their attention. With only a second of silence, a group of terrorists bursts onto the stage and an electronic-heavy score by Ludwig Göransson blares out. It’s not the jump-inducing moment that one feels it should be as Nolan uses all of his filmmaking devices of sound and vision to comfortably lure us in rather than push us away. In some ways that sums up his entire filmography. His stories may be complicated, but his filmmaking style tells you exactly how you should feel, even if you aren’t feeling it or understanding it.

One wishes that this film had the heart of Nolan’s Interstellar (2014), a love-conquers-science story, rather than emphasizing the minutia of all the science and why it matters. Nolan, much like Lang before him, has created a film with a villain who controls elements of the story in the same way that Nolan does as writer and director. That parallel is not as fun here as it is in Dr. Mabuse. Tenet is nonstop plot, which will be great for those who want to piece together something like this, but I found Pattinson’s precariously-knotted necktie far more interesting than some of the things that were being tediously explained.

By the end of the film we’re left with “the protagonist” trying to outwit an evil man. Aren’t we all the protagonists of our own lives, though? It’s the moments when we feel out of control, when others take precedence over our internal hierarchy, when we are most vulnerable. Nolan fails to make that process of reclaiming control as fulfilling as it should be for “the protagonist,” though almost every other character gets a proper sendoff. We want more from a movie that questions free will, and from the hero who fights for it.