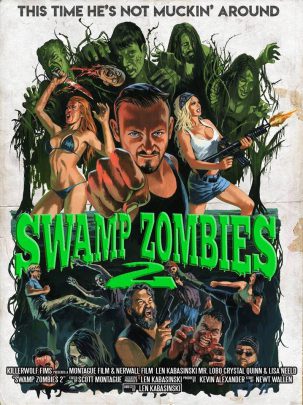 What is Swamp Zombies 2? It’s what it sounds like.

Swamp Zombies 2 is the latest film from Len Kabasinski, Erie-based filmmaker and founder of Killerwolf Films. This isn’t a film you’re going to be able to catch in theaters (unless you’re lucky enough to live in Erie, Pennsylvania and stopped in for Kabasinski’s screenings of it on July 13th and 14th at the Erie Movie House.) It released on Blu-Ray and DVD on July 1, 2018.

Swamp Zombies 2 is Z-grade horror (no pun intended on the Z) and a fine example of it. Len Kabasinski is a film-maker who first came to my attention after having his work highlighted on RedLetterMedia’s B-grade film review show, Best of the Worst. His film debut was back in 2005 with the original Swamp Zombies!!! Since then, he’s directed many other low budget titles ranging from Curse of the Wolf, Skull Forest, and Fist of the Vampire. Kabasinski’s films reflect many of the man’s personal interests: kick-ass martial arts, glorious excessive gore, and ample naked female bosoms. He is steeped in the 1980s straight-to-video film tradition, and martial arts and horror dominate his work. 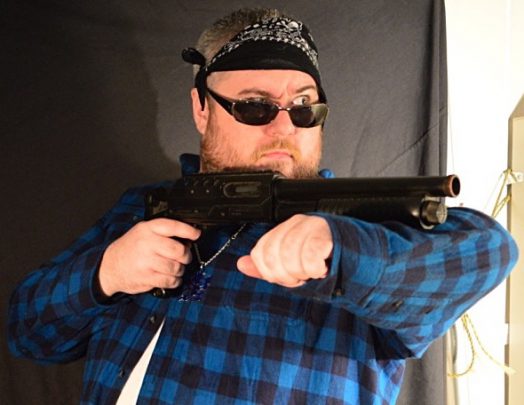 The film’s premise is only tangentially connected to the original, which saw zombies wander around a swamp and evil scientists/government officials exploit the phenomena for their financial gain. In Swamp Zombies 2, a reality program called “Lucky Stiffs” pits contestants against the swamp full of zombies for entertainment. One of the show’s workers (or contestants?) named Mouse (Crystal Quin) wants to expose the show’s unethical practices. The show’s producer will stop at nothing to prevent her from exposing his evil ways, so he hires Jack (Len Kabasinski), a vaguely Snake Plissken-like character, under the pretense of protecting his show’s contestants but actually to stop Mouse.

This zany concept comes courtesy of screenwriter Newt Wallen, who also stars in the film. Wallen has been fairly involved in the Philadelphia/New Jersey B-filmmaking scene for several years, having starred, produced, and written in several productions. His most recent acting, producing, and writing credit prior to Swamp Zombies 2 was Midnight Show. Wallen might best be known as one of the creative forces behind Underbelly, a YouTube comedy-review show focusing on pop culture. Wallen’s script delivers everything you might want out of a film called Swamp Zombies 2: zany, over the top lines, knowing humor, and plenty of action. Homages to horror and B-horror classics are scattered throughout, including naming characters Romero and Dohler. Attempts at social commentary are icing on the cake, though they aren’t given enough attention or screen-time to be truly biting. These little touches are best displayed in several cutaway scenes, such as a commercial advertising a special interest group advocating for zombie rights, a fun parody of PETA. While these scenes tend to upset the editorial flow of the film, they are amusing in their own right. 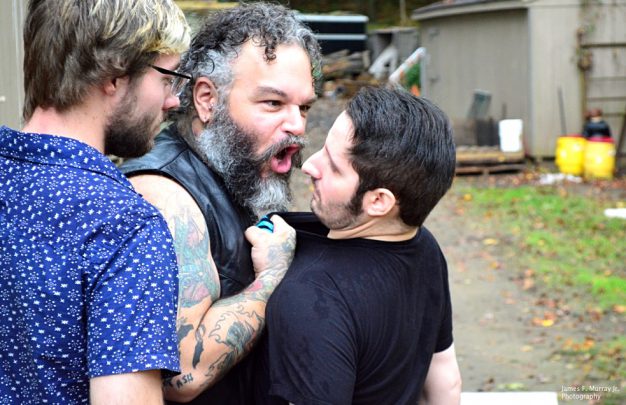 Swamp Zombies 2 is definitely a low budget work, and it shows. The Foley work is laughably cheesy at times, though this is actually a good thing for fans of this type of filmmaking. Echoes can be heard in the background during many dialogue scenes, and overall coherency falls apart in the last 30 minutes. It feels like the editors were struggling to piece together scenes in a strategic order, or had to work around missing scenes. Some of the special effects work involves inserting standard explosion smoke on top of a still shot of a building. The fight scenes in the film cut away most of the time, never showing direct contact between people except on rare occasions.

Luckily, Kabasinski and crew knew what kind of film they were making. They play up the low-budget nature of the movie and revel in the humor of it. Kabasinski’s action-hero performance is the perfect level of straight-laced; his character is never overtly ironic, yet the film acknowledges him as a Snake parody of sorts. Newt Wallen’s performance is more knowing, and there a couple of longer shots where he pauses for comedic effect. Robert Smith’s Logan is a wonderful heel character, and he hilariously abandons his girlfriend on multiple occasions. The film is not without its artistic merits, as it does make use of vivid bright reds, greens, and blues to add some visual flair.

Swamp Zombies 2 is also lucky enough to star Mister Lobo as the evil producer. Lobo might be the most familiar name here, as he is known among cult horror fans for hosting Cinema Insomnia, a late night public broadcast show that screens classic B-horror and sci-fi films. The program is most familiar to the people of Sacramento where the show began, but it spread to stations nationally throughout the 2000s. Lobo’s performance is gloriously ludicrous, and his opening monologue about peanuts feels appropriately zany. 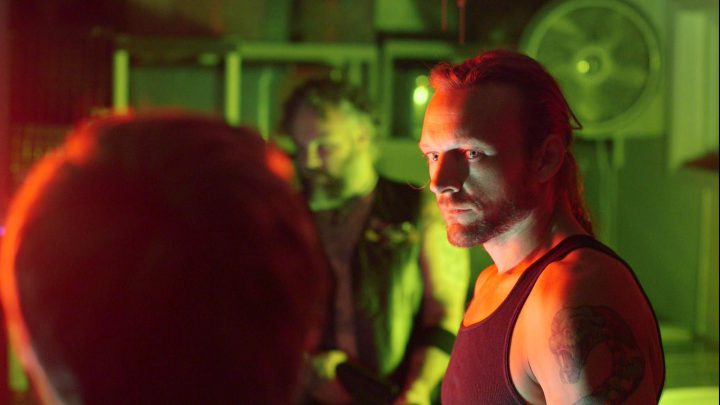 For fans of Len Kabasinski’s work, Swamp Zombies 2 is a welcome edition. Replete with martial arts scenes where Kabasinski gets to show off his years of training (Kabasinski holds belts in multiple martial arts and competes in tournaments in Pennsylvania), and full of gratuitous gore and breasts (sometimes at the same time), the movie is what anyone could ask for in an ultra low-budget Z-grade production. While the film doesn’t feel quite as zany as some other movies of this type, it is entertaining enough. It’s not Len’s best film (or best worst film, rather), but it is a briskly-paced movie and never has the dreaded long stretches of nothingness that many movies of this ilk contain. Swamp Zombies 2 keeps the blood flowing and the schlock coming, and that’s all you need from a movie like this.

You can see Swamp Zombies 2 by clicking here. 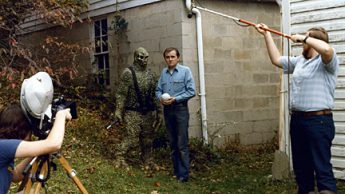 While Swamp Zombies 2 may offer some good schlocky fun, Don Dohler‘s The Galaxy Invader is a pure B-horror classic. Replete with redneck stereotype characters, terrible costumes, and assorted special effects, this film is a wonderfully over-the-top good time with a turn for the bizarre. Swamp Zombies 2 is too knowing to beat out this more ignorant and thus more fun effort from Baltimore native Dohler.

Len Kabasinski has definitely improved on his debut effort. The original film can be somewhat of a slog to get through, even with its more amusing moments and wonderful use of wrestlers to fill out its cast. The director was still learning how to shoot properly at the time, and Swamp Zombies 2 displays all he’s learned. With a wittier and more off-beat script and some fun performances, Swamp Zombies 2 helps showcase where Kabasinski is headed as a director. 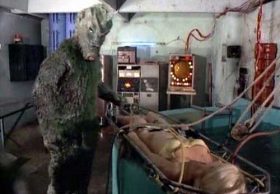 Zaat is Don Barton‘s schlock movie magnum opus. Making use of stock footage from Florida public entities and hilariously displaying a costumed creature wearing tennis shoes due to sheer laziness on the part of the actor and crew, Zaat has what every B-horror fan looks for. Shockingly incompetent and messy with a random segment featuring hippies that has nothing to do with anything else happening, this movie will leave you laughing from start to finish. Swamp Zombies 2 is also replete with laughter, but it doesn’t quite rise to the level of Zaat‘s humor, due to being more competently produced and coherent.

Rank all of Len Kabasinski’s films on Flickchart today!