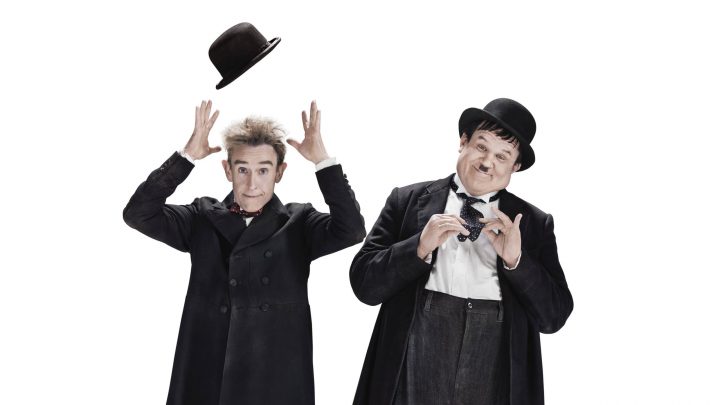 If you’re making a biopic about a famous person, you have a threefold problem. First, you must get surface appearances correct, the look and the sound of the person. Next, you must understand and find a way to generate artificially whatever inner magic enabled your subject to make an impact on the world. Finally, you must still make a movie, with a beginning, a middle, and an end, protagonism and antagonism, artful production design, all that stuff.

Tuning those three dials perfectly is essentially impossible, and the task gets harder the more famous your subject is. Currently the highest ranked biopic on Flickchart is Goodfellas, but nobody knows how close Ray Liotta came to actually capturing Henry Hill’s mannerisms, and no one cares; he’s not that kind of famous.

The highest ranked biopic about a famous person, famous in the modern sense, where we mostly know what they look and sound like, is, arguably, The Social Network. The next is Ed Wood. Then maybe The Elephant Man or Malcolm X (depending on your definition of “famous”).

In other words, our best biographical films are not about the super-famous, and the super-famous do not, by themselves, make great subjects for great films. Usually it requires some extreme personality quirk or a political or historical significance in order to support the structure of any kind of serious movie storytelling.

On the other hand, we make films all the time about personalities like Abraham Lincoln, Eva Peron, and Jesus, but more often than not they wind up lopsided along one axis or another. Often physical appearances are overemphasized, and we wind up with an over-emotional theme park sideshow.

What I’m trying to say is that the stated “project” of Stan & Ollie, Jon Baird’s sweet but intense examination of the last days of the greatest comedy duo who ever lived, is audacious almost beyond the hope of success. On paper, it seems destined to be, in the best case scenario, a Rich-Little-style steeplechase for some gifted impersonators.

I’m sure that if you were to take a serious anthropological survey over the past one hundred years of all celebrity impersonations ever attempted by anyone, amateur or professional, somewhere in the top five next to Walken, Nixon, and Curly Howard would be Laurel and Hardy. A natural side effect of, and a testament to, their world-dominating media celebrity is the pervasive recognizability of their characters, which over time morphed into a culture-wide expectation that that’s simply what you did with Laurel and Hardy; you tried to mimic them as perfectly as you could.

I mean, what else was there to do? Find their hearts?

Well yes, and that’s what Baird managed to do, a feat so surprising given how numb we are to these impressions that it adds yet another layer of magic to the story.

Coogan and Reilly are not primarily impersonators, nor would such artists be the right tools to tell this story. Coogan and Reilly are clowns in the ancient sense of the word, noble fools who shine lights on the cracks in our impervious respectabilities, warriors astride the wall between the real and surreal. In other words, they are members of the same lineage as Laurel and Hardy themselves.

Their impersonations do not merely resemble their historical antecedents. They give these men an authentic dimensionality and warmth that we always hoped lay behind the scraps of footage that constitute our cultural memory of them. They can do this because they themselves, the actors, understand the deep, sweet pain of trying to be funny, needing to be funny, in order to continue feeling like a human being.

This deep, existential empathy gives the actors access to that magic twinkle that made these characters so beloved, and this allows them to connect us with them in a brand new way, not just as artifacts of a past era resurrected for some gruesome salute, but as almost a new experience, one not mediated by the burdens of history or prestige or “art,” a much more direct and personal experience, as the audiences of their own time must have felt with them. 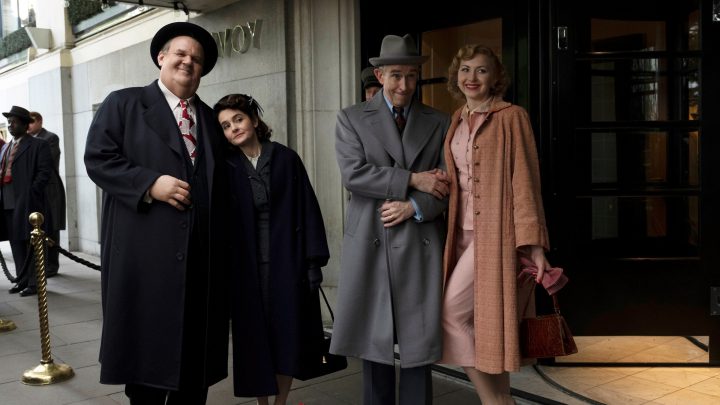 The sense of newness and freshness comes in large part from the perspective of the women in their lives, and it is through Shirley Henderson‘s and Nina Arianda‘s eyes that we see into the most vulnerable parts of these men, both serial monogamists who nevertheless fell in love deeply and completely, without, seemingly, any of the plastic cynicism that accompanies our current picture of Hollywood romance.

Because of these four unique relationships portrayed in the film, each man with his wife and each with each other, we’re given as complete a picture of these characters at that point in time as it is possible to give. And the good news is that it’s not too much information; even with the kimono wide open, none of the magic of who these great men were is lost. In fact, it makes them more amazing, to be reminded that all artists are, first thing in the morning, human beings, who then get down to work and somehow find something that the rest of us don’t have.

And that is what Jeff Pope’s screenplay is fundamentally about, that constant damning dialectic that people like these men face between one’s moral humanity and the fact that art, when it’s good, unbinds you from any human problems or restraints, or at least it feels that way. The damning part of this is that the better the art, the longer you will be encouraged to pursue it with ever greater sunk costs working impish influence on your doubts and fears. Inevitably, either the art will interfere with your humanity or your humanity will interfere with your art, because like I said it’s a dialectic; they are fundamentally contradictory forces that the artist must hold in his heart all day every day.

From this central theme Baird spins a well-grounded, texturally lush film that does not flinch from the melancholy truths of tragic clowns struggling to find how their unique perspective on divine absurdity is supposed to fit into a world whose culture continues to accelerate in weird and upsetting directions.

The film is saved from a maudlin, Chaplin-esque obsession with artistic suffering by simply relying on the continuing power of Laurel and Hardy’s timeless, crystalline comedy to puncture the darkness with the sweetest kind of light. I’ve written gushingly before about the almost transcendental dance routine from Way Out West which functions as a kind of spiritual linchpin to Stan & Ollie, typifying as it does, in a pure, wordless package, an exegesis on the Laurel and Hardy sense of humor.

But another bit, also from Way Out West, does an even better job at articulating the real engine that drives Laurel and Hardy comedy,  something I call “sweet delight,” where you find yourself laughing not because of any particular joke or pratfall, but just because you are suddenly, surprisingly happier than you have ever been in your life. This bit is “The Blue Ridge Mountains of Virginia,” which is exactly as funny from Coogan and Reilly as from Laurel and Hardy, again, not because it’s pastiche or faithful or “accurate,” but because of its timeless genius and Coogan and Reilly’s utter dedication to it.

I realize now that I had absolutely no chance of bringing any sense of critical or journalistic objectivity to writing about this film. I really have no idea of how this movie would strike someone to whom Laurel and Hardy are merely part of the history of Hollywood’s Golden Age that you read about on Wikipedia. Perhaps this article is not really about the film but about the experience of being a fan who very much wants the new entry in the canon to be good and worthy, and who to his delight finds not only that it is good but that the filmmakers love all the same parts of the canon that he does, and every bit as much.

Rank all Laurel and Hardy movies on Flickchart >