Review: “Sorry To Bother You” 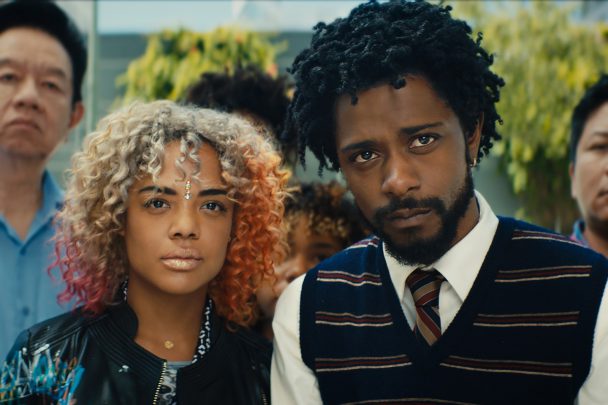 This is one hell of a debut. In what is sure to be a hot topic of conversation this summer, writer-director Boots Riley has combined the best and strangest of Get Out and Brazil, and mixed in some Oakland edge and some topically insane real-life influences, and made it look sexy. That’s no small feat, yet Riley’s Sorry To Bother You performs double duty with flying colors — both a dystopian kick in the pants and a laugh-a-minute satire, both deliriously delightful and delightfully delirious.

Before the film even begins, the assembled cast and crew is enough to take your breath away. Behind the camera, Riley, lead vocalist of The Coup, proves his mettle as a creative screenwriter and crafty director. His camera has a way of presenting something instantly odd and unexplainable yet characterizing it with humor or simple surreality; it is certainly reminiscent of Terry Gilliam’s brand of dystopian madness or even some of the layered absurdities of Ruben Östlund’s The Square. Riley has also compiled a killer soundtrack, comprised of some Coup songs here and there, but mostly — in an inspired decision — the psychedelic vocals of Merrill Garbus and her Tune-Yards compatriots. The film begs a second viewing for numerous reasons, and it is testament to Riley’s musical savvy that the soundtrack alone is one of them. Add in some eye-popping costume design by Deirdra Elizabeth Govan, and a producer credit from Forest Whitaker, who also provides an important voice that I will not dare spoil, and it’s a knockout team.

On-camera, standouts and hidden gems of various screen properties of recent years populate the cast: the inimitable Tessa Thompson, the ever-charming Steven Yeun, the on-and-off-screen hero Terry Crews, the suave Omari Hardwick, the legendary Danny Glover, even the side-splitting voices of comedy goldmines David Cross and Patton Oswalt. And of course, leading the film, one of modern cinema’s coolest and cleverest young male performers, Lakeith Stanfield. (This particular marriage of actor and film is a stupendous combination — some rising stars can get saddled with a lamentable first go as a full-on lead, but Stanfield’s lanky charisma and wide-eyed dramatic ability are a perfect fit for Riley’s anarchic tale.)

And what an anarchic tale it is. The film takes place principally around Oakland, in a disorienting alternate reality only somewhat different from our own. In this world, one of the largest mega-corporations in operation is the all-in-one labor and living facility known as ‘Worry-Free,’ owned by power-mad entrepreneur Steve Lift — played with Musk/Bezos-esque megalomania by Armie Hammer. The central path of Sorry To Bother You, however, is more concerned with Cassius Green (Stanfield), a nice young man living in a garage owned by his uncle Serge (Terry Crews). Cassius, known as Cash, finally gets a job at Regal View call center, and is introduced by veteran caller Langston (Glover) to the true way to get ahead in the rat race — “use your white voice.” This is not only a devilishly clever empirical diagnosis of one of modern society’s most insidious racial ills, but a brilliant cinematic gag that elicits laughs honestly every time Riley whips it out.

With David Cross providing his ‘white voice,’ Cash becomes such a successful phone salesman that he is quickly promoted to ‘power caller,’ sending him upstairs to the real leaders. There he meets various razor-sharp parodies of ‘corporate’ characters, from the insufferable Diana DeBauchery, pronounced dee-beau-cherry (Kate Berlant), to the mysterious Mr. _______ (Hardwick), whose ‘white voice’ is also wildly successful, and just as hilarious as voiced by Patton Oswalt. Meanwhile, grassroots organizer Squeeze (Steven Yeun) and Cash’s old friend Sal (Jermaine Fowler) try to strike for better wages at the call center, and his compassionate, whip-smart artist girlfriend Detroit (Thompson) opens an art show called “The New Fuck You” in which Thompson, and Riley, get a chance to skewer self-serious and occasionally inane ‘points’ being made by well-intentioned but unfocused performance artists and the like. The performers each give it their all, diving deep into Riley’s world with a ferocity that speaks to his clarity of vision and talent for directing actors, yet it is Stanfield who really takes the cake here. As if we needed any more evidence of his talent (after delivering scene-stealing turns in Get Out, Selma, Dope, Straight Outta Compton, and many more), Sorry To Bother You allows him to fully embody a character who drives the plot from start to finish, and offers an excellent balance of audience surrogacy and bemused resilience against the insanity around him. 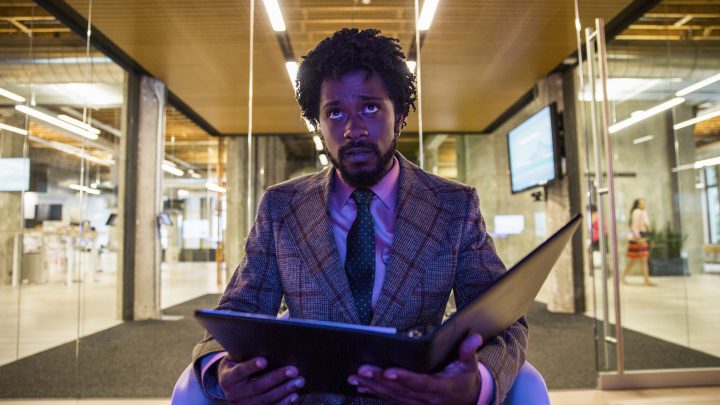 The plot is bizarre, disarming, and ultimately deeply entertaining, despite the frequently disturbing twists and events. Perhaps most remarkable in Riley’s approach is that for every nightmarishly dystopian development (such as the #1 show on television being “I Want the S#*t Kicked Out Of Me” or the viciously uncomfortable racial insensitivity during Lift’s swanky drug-fueled party), there is a side-splitting line, gag, or slapstick goof to bring it all back to fun. It might be a laugh of discomfort, disbelief, or disgust, but to sit through this without cracking a smile would be a tall order.

This is the majesty of Sorry To Bother You when it’s all said and done: Riley’s film is fun. At a time when exploring race (or, indeed, any of numerous difficult social issues) in film is often met with indifference, rage, or that old “movies should be for everyone” dogwhistle, Riley has done brilliantly to balance expectation and execution. He swings his satirical sword in many directions, and while it may seem a mess at times, by the end he has hit all his targets. This film is surreal, enjoyable to the last minute, and has plenty to say about nearly every unequal corner of our social situation, with vibrantly colorful costumes and an unforgettable score. It is not often that a film like Sorry To Bother You is made, but with the starpower, off-camera talent, and stylistic vibrance Riley has brought together, here’s hoping we see more like it.

Sorry To Bother You vs. Knocked Up

Sweet but strange works slightly more in STBY‘s favor than Apatow‘s. Riley’s film is more of a statement, and has a better soundtrack anyway.

Sorry To Bother You vs. When Harry Met Sally

Two hilarious films, but in terms of addressing current truths with flair, I’d prefer a wacko dystopian romp than Billy Crystal and Meg Ryan being cute. (Though that cuteness is a serious delight.)

Sorry To Bother You vs. Platoon

This is hard. But I just wrote a huge paper on Platoon, and, while I love it, I spotted more flaws than I did initially. As the Charlie Sheenaissance has yet to reach full swing, I’ll stick with this brand new winner.

Sorry To Bother You vs. Contempt

Here we go, the heartbreak. I’m giving it to Jean-Luc‘s Technicolor masterpiece. His politics are what they are, Bardot‘s politics are what they are, but this film is just stunning through and through. Cinema extraordinaire. Riley’s cinematic sense of humor is somewhat reminiscent of Godard’s in Contempt, actually — particularly the self-reflective jabs here and there. In fact, Cash and Detroit have an argument in a sun-brightened apartment that shares some beats with the infamous unbroken argument scene in Le Mépris. But this French film holds a special place in my heart.

Sorry To Bother You vs. Jackie Brown

Probably Tarantino‘s ‘best’ film as a film, and I admire it, but I find Riley’s anarchic creation more daring and more risible, in a great way.

Sorry To Bother You vs. Snowpiercer

I was directly reminded of this one during Sorry to Bother You. The anti-soulless-capitalism rebellion takes different forms but has a similar mix of danger, humor, and absurdity in Riley’s and Joon-ho‘s pieces. The bizarro third act of Snowpiercer is fascinating, and it’s a hell of a ride, but Sorry To Bother You uses its ensemble slightly better in my humble opinion.

Sorry To Bother You vs. American Hustle

Another blow, but I have a serious soft spot for David O. Russell‘s white-hot hot mess. Given the opening frame, which reads “Some of this actually happened,” plus the opening scene and its eventual payoff, I find American Hustle pure entertainment from the start. Plus, Bale, Adams, and Renner turn in simply breathtaking performances, and the late scene between Bale’s Irving and Renner’s Carmine Polito just knocks everything out of the park. To some degree, it seems like elements of Russell’s “I don’t care about plot, just characters” have dripped into Riley’s approach, but even Tessa Thompson’s beautifully bombastic anarchism can’t top Christian Bale‘s chameleonic and quietly hilarious performance.

Sorry To Bother You vs. Hidden Figures

A fabulous story that could have been told better. The performances of Hidden Figures are stellar, but the direction sags far too often. Meanwhile, Riley is on top form right alongside his performers in Sorry To Bother You, so it takes the cake.

Sorry To Bother You vs. Brick

Rian Johnson‘s high school gumshoe noir is so clever it’s probably too smart for its own good, but nevertheless it proudly holds a very high place in my ranking. Johnson’s film is brilliantly written, and deeply rooted in cinematic references and pulp thrills, which inclines me towards Brick, but I admire the distinctly new takes on filmmaking of Sorry To Bother You a bit more. Brick looks backwards for a modern story, Sorry To Bother You looks in every direction for a timeless one.

Sorry To Bother You vs. Nightcrawler

Nightcrawler is one of the best horror films of the decade, in the distinctly unnerving genre of could-totally-be-real. While Sorry To Bother You has some similarly depraved depictions of the lengths people will go to ensure success, Dan Gilroy‘s film takes a less surreal approach and roots its terror in a very realistic sociopath played impeccably by Jake Gyllenhaal. His performance probably tops most of the ones in Riley’s film, but STBY goes for gusto over subtlety, and it pays off far more than the less-is-more ethos of Nightcrawler. Sorry To Bother You is heartily a more-is-more movie, and all the better for it.

Discuss Sorry To Bother You here or in the comments below!