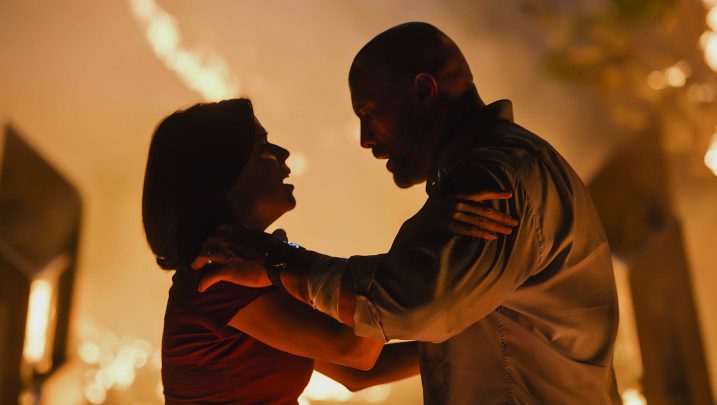 Dwayne “The Rock” Johnson returns to theaters again this summer with an attempt at a Die Hard-style action blockbuster. Skyscraper is a film that seems wholly designed to stroke the ego of its star. In this movie Johnson plays a war veteran and former FBI agent who also seems to be fully trained in computer hacking as well. There is nothing that his character is incapable of doing, and just to make him even more impressive to the audience, he does it all with a prosthetic leg. In case you’re wondering if they do anything interesting with the idea of him missing a leg, the answer is NO. There is one scene you can see in the trailers in which the prosthetic creates a tense moment, and occasionally Johnson has an awkward stride, but through most of the movie you wouldn’t even notice its absence. He is more agile and effective on one leg than the greatest American Ninja Warriors.

It’s almost comical how much Skyscraper loves its protagonist. He is the smartest person in the room and never fails to get the upper hand in any given situation. He loves his family to the point where he will literally jump into a burning building to save them. He is amazing at improvising solutions to impossible situations, even if all he has on hand is some duct tape. The filmmakers don’t seem to understand that a hero can — and should — have flaws. When we see Johnson presented as a perfect specimen, it becomes difficult for the audience to relate. Instead of a surrogate for us, he is elevated as an idol to be worshiped. At a certain point the artifice they’ve created overwhelms us and makes the character feel false. We know that no human is this perfect, so he becomes a caricature, and more than once there were chuckles in the theater when he tried to do another impossible feat.

Reflecting on the plot of Skyscraper, the descriptor that instantly springs to mind is “obvious.” Every beat of the movie is predictable, right down to the final scene. Part of the problem is the fact that there is no subtlety in the foreshadowing. Watch just one of the trailers and you acquire a complete understanding of everything that happens in the movie, and you spoil most of the major action set pieces in the bargain. Skyscraper is following a formula that has been mapped out by countless action movies in the past, which leads to comparisons that will always favor the classics over the imitation. Sometimes a film that has a predictable structure can work if it also brings something new to the genre, or simply excels at rehashing the basics, but this movie doesn’t even attempt to be original or exceptional.

The plot is about an Asian billionaire who has constructed the world’s tallest building — it dwarfs the Burj Khalifa. Naturally, anyone that wealthy has made some enemies along the way, and a group of terrorists sets the skyscraper on fire in an effort to get something out of him. Meanwhile, an independent contractor who is in the process of inspecting the building gets caught in the middle of it all when his wife and twin children are trapped in the blaze. The villains’ plans start to unravel when they realize that it won’t be so easy to get what they want, and when this simple contractor proves more trouble than they anticipated. From there all the story points are precisely what you’d expect, and the only mystery that remains is what the bad guys are seeking and how they plan on getting it. The reveal of that information is lackluster at best, so there is no moment where the audience gets a surprise that might make the plot more engaging. 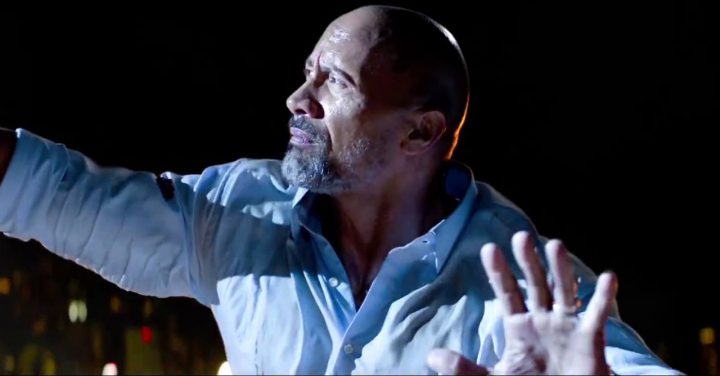 This is writer/director Rawson Marshall Thurber‘s first foray into a pure action movie.  He’s been known for his work in comedies in the past, but after the success of Central Intelligence two years ago (which was an effective blend of comedy and action), Universal Studios and Legendary Pictures clearly felt he had the ability to make the transition. While his directing isn’t flawless in Skyscraper, he is able to hit the mark when it comes to constructing the most important scenes. Those who have a fear of heights could struggle to breathe if they see this movie, because you can feel the danger of characters dangling by their fingertips thousands of feet in the air. Even though everyone in the theater knows the protagonist won’t die, the audience will gasp as it seems he could fall at any moment. The visual effects that make it appear he’s dangling above a city are seamless, and the cinematography is excellent for those scenes.

Thurber’s problem is less with his directing style than it is with his writing. People often excuse this kind of blockbuster as the kind of film where “you just turn off your brain” in order to enjoy it, but it would be better if Thurber hadn’t turned off his brain while writing it. Not much in Skyscraper holds up to any amount of scrutiny. The inner workings of the building itself are ridiculous, and the idea that they would remain functional after more than 100 stories have been engulfed in flames is laughable. Neve Campbell is given very little to do aside from playing damsel in distress.  Her rare opportunities to fight back are all cut short, forcing her into a position where she has to be saved. In this age of female empowerment, it’s a shame to see her character so underwritten. Also, the children have no function in the story aside from being motivation for Dwayne Johnson to keep fighting. They are such non-characters I couldn’t even tell you their names.

The other issue with Skyscraper is the inconsistent tone. More than one scene in the climax borders on farce. The audience in my theater reacted to these moments with laughter, but it never felt like that was Thurber’s intent. For example, The Rock never once pulls the trigger of a gun, but he does fight with a broadsword. Needless to say, that doesn’t exactly fit the tone of a modern action movie. The main villain also makes a humorous exit that would have been more appropriate in a Naked Gun movie. Perhaps more surprising is the fact that Thurber doesn’t inject intentional comedic beats into the script. Most modern action blockbusters include a lot of jokes in order to break the tension and make the characters more likable. With a few minor exceptions, this is all serious business that doesn’t leave any room for levity, despite its inherent ridiculousness.

Yet, despite the multitude of mistakes and shortcomings in Skyscraper, it will probably make a tidy profit at the box office.  In every way this movie is manufactured to maximize dollars. The blood is kept out of all the violent deaths to maintain that PG-13 rating, allowing the studio to sell it as a film for the whole family. Johnson is possibly the most bankable star in Hollywood right now, so he is front and center as much as possible. It’s not a coincidence that the action all takes place in Hong Kong, because that allows them to angle for the valuable Chinese market. Free screenings like the one I saw are clearly intended to create audience buzz, because the studio expects poor ratings from the critics. All of this is designed to create a financial hit, and there’s no shame in a studio trying to make money. But this kind of mindless entertainment doesn’t deserve the attention it will most likely receive.

Are you ready to Rock? Let us know what you think about Skyscraper!

Ben Lott has been a member of Flickchart since 2010, and is an avid contributor in the Flickcharters Facebook group. Ben seeks escapism, so he leans towards movies with a strong narrative, particularly in the action or sci-fi genre. You can find him on Flickchart as Blott.