When a live-action Pokémon movie was first announced, many were honestly shocked. Anime to live-action translations have never been the smoothest, nor have video game films, and Pokémon seemed an especially odd choice. Sure, out of all anime properties, Pokémon is one of the most lucrative and universal. A generation or two grew up playing the games and watching the cartoon; it is an obvious cash cow. But there’s a reason it hadn’t been attempted before. The game is based on magical creatures, making a live-action version a difficult task.

Then we learned that the film would not be based on Ash Ketchum, the human protagonist of the long-running anime series and someone instantly recognizable to those whose nostalgia could draw them into the theaters. Instead, it would take its cues from a spin-off game and feature new locations. To call these choices bizarre would be an understatement; why take such a risk by departing from the most widely known source material? 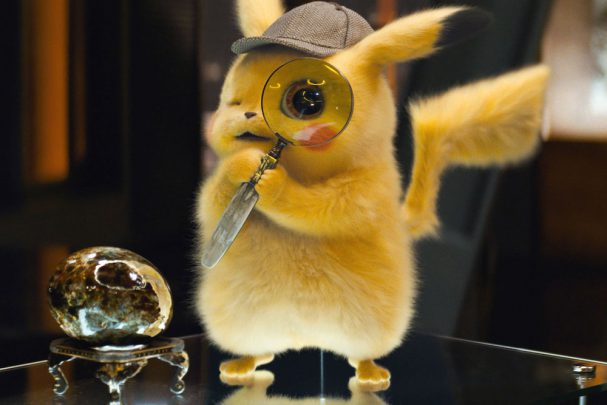 One can admire Rob Letterman and his team for making these choices. Pokémon: Detective Pikachu manages to carve its own path and avoiding many of the tropes of the video games and TV shows. Yet its odd, noir-inspired approach makes it unclear for whom the movie was made. It’s light on Easter eggs and Pokémon references for longtime fans of the series, and it seems unlikely that such an ironic, niche approach to the material will create many new fans. From a cinematic perspective, the editing leaves much to be desired, and a lack of spatial continuity mars the second half of the film especially.

The film is light on the Pokémon battles that have historically defined the franchise — probably to avoid the realistic violence that could result from a fight between photorealistic Pokémon. Speaking of which, praise can be directed towards the CGI artists who crafted these critters. They all have high levels of detail, from the cute Pikachu to the nightmare of the creepier looking ones like Ditto and Lickitung. Arguably, the latter should have never been brought to life outside of an acid vision or a David Lynch movie.

The script is not quite as special as the effects. There are some baseline themes that mostly work, but the story feels hackneyed and the machinations of the detective mystery become overly convoluted as the film progresses. On the plus side, the spritely personality of Ryan Reynolds makes a fun voice for the titular Pikachu, and Justice Smith has a decent enough rapport with him.

Mixed success though it is, Pokémon Detective Pikachu may hold the distinction of being the best video game movie yet made. It doesn’t take itself too seriously, and it makes for a light and breezy — if frequently puzzling — time at the theaters. It’s also worth seeing just for some of these nightmare-inducing versions of the beloved monsters (see cursed image above).

Rank all Pokémon movies on Flickchart!