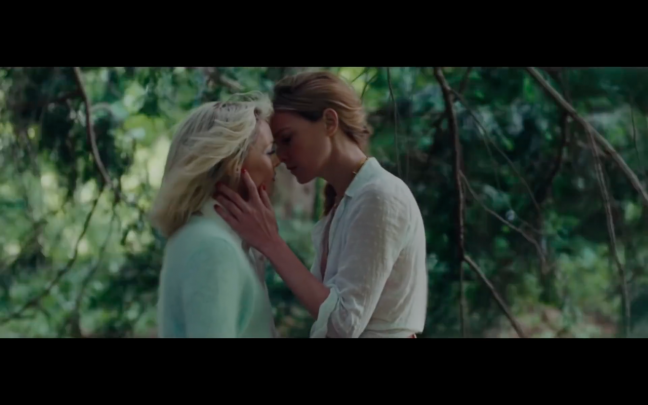 In the 1970s, film scholars Kenneth Turan and Stephen Zito wrote the book Sinema: American Pornographic Films and The People Who Make Them, a survey of stars and auteurs of the pornographic mode of filmmaking that was at a height before the dawn of video and eventually the internet. Late in Yann Gonzalez‘ sophomore effort, Knife+Heart [Un couteau dans le coeur] (2018), a pornographic film ends and the lights in the movie theater go up revealing a woman sitting by herself on the front row. The men sprinkled about adjust themselves, but one stands up upon noticing the woman and approaches her. He asks, “Are you Anne Parèze?” She replies that she is, and the man then thanks her for the masterpiece everyone just saw. Anne Parèze (Venessa Paradis) is the fictional auteur of French porn cinema at the center of this film, and she’s exactly the kind of figure that would’ve been covered in a book like Turan and Zito’s… had she been real and American, of course.

On one hand the film is a love story about creatives, but on the other it’s a violent thriller. This is where a gap of sorts, and the idea of gaps as a core concept of Knife+Heart, takes shape. The casting of gap-toothed icon Vanessa Paradis could not be more perfect, for not only is her performance nuanced and affecting, but the physical embodiment of the film is found in her smile. Gaps in sobriety, affection, arousal, gay and straight, young and old, light and dark, life and death, good and evil – it’s all here. 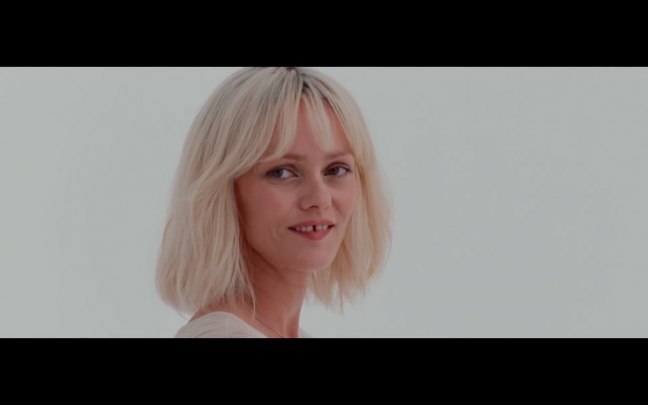 These gaps are then found in the film itself, as the materiality of film is something that Yann Gonzalez incorporates into the plot with great passion. As Loïs works at the Moviola, splicing shots together and making cuts, she occasionally slows down frames at the tail end of a reel where Anne Parèze can be seen smiling on set. Watching it frame by frame, the space between each image is made noticeable, and the simple twinkle in her eyes and reveal of her beautifully-unique smile carry weight as she is simultaneously in the room with Loïs by appearing on film, yet also absent from her side.

This concept is then perverted and taken to new heights by the film’s dual nature, as the difference between light and dark arises during a scene in which the power flickers on and off while the killer is in the midst of Parèze’s film crew. Going from the ignorance of darkness to what revelations the light may bring is a classic horror device that is well-executed in Knife+Heart, where it manages not to feel cheap.

Throughout Knife+Heart, Gonzalez continuously impresses with his ability to present ideas on a dramatic level and then make them feel real through his aesthetic choices. The absurdity of some of the film’s most serious plot elements makes this more akin to the cinema of Walerian Borowzyck than to William Friedkin’s Cruising (1980). An interest in storytelling and the mythos of the French countryside are ingredients that give this film a particularly unique flavor, and Gonzalez, cinematographer Simon Beaufils, editor Raphaël Lefèvre, and composer Anthony Gonzalez (of M83) proved more than up for the task of finding ways to visually and aurally communicate that magical quality.

One of the film’s most powerful scenes is a celebratory picnic for the cast and crew on a recently-wrapped up production. It’s a sunny day, and everyone is reclined on a blanket placed over the tall grass of a field by the forest. The grain of the 35mm film stock sings in these conditions, and with the costume design it truly feels like it is 1979 – Vanessa Paradis in a light-blue cardigan with a white-and-pastel-pink striped shirt is worth the cost of admission by itself. Detached from the party is Anne Parèze, who wishes that Loïs was with her to celebrate. One of her transgender friends sits beside her in the grass and proceeds to read Parèze’s palm. Tears well up in her eyes and eventually begin to stream down her cheeks just as Loïs steps up behind her – the camera tilts up to reveal that she is as emotionally moved as Parèze. A black bird with white eyes lands on Loïs’ shoulder and then flies off just as a violent gust of wind and the sound of thunder rumbles overhead. Everyone quickly gets up to stop their things from blowing away and then proceeds to find shelter from the quickly-advancing storm. The kiss that Parèze and Loïs share as the rain begins to pour is incredibly powerful and feels true to life.

For lovers of the French New Wave and post-New Wave cinema, there is much to enjoy here, like the very sincere and competent recreation of the nighttime driving scene in Jean-Luc Godard’s Pierrot le fou (1965), the mere sight of a poster for Robert Bresson’s Four Nights of A Dreamer (1971) in a character’s apartment, and the casting of Yann Collette whose face will be immediately recognizable to those who have seen Philippe Garrel’s I Can No Longer Hear The Guitar (1991). Gonzalez has created a film that is both then and now, with generation-spanning cinephilia bridging the gap. Beyond that, Knife+Heart is simply a delight to watch, and it manages to express heartfelt emotions of longing and desire within the shell of a blood- and ejaculate-soaked film.

Rank all Gay and Lesbian films on Flickchart here >