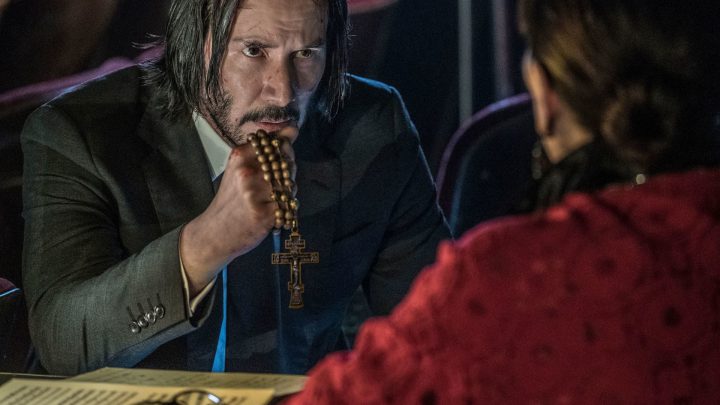 I first saw Star Trek II: The Wrath of Khan when I was a child, before I was told by the world that Kirk’s agonized scream of Khan’s name was not actually an amazing moment but was in fact a cheesy, riffable, mimetic cliche. In other words, I saw Khan before I lost my innocence.

The John Wick franchise attempts to harken back to an era of action films before they lost their innocence, before writers became so burned out and terrified by cliche that the genre began to lose its cohesion. Plots became byzantine, our heroes progressively neurotic, and the stakes so ever-increasing that eventually the genre just gave up and became modern sci-fi cinema. Since this transition, “normal” action movies, those of the ’80s-to-early-90s vein, continue to be made of course, but they are almost always of inferior quality, leaning heavily on classic franchises (e.g. the Kickboxer series) or on dependable niche cross-media brands like John Cena.

But what Wick proposes, and of which the latest installment is the best example, is a world in which action films had been allowed to continue their technical and political evolution alongside the other genres, without simultaneously being strong-armed into an arms race that would strip it of its soul. What if we started with a Kickboxer, or a Lethal Weapon, or a First Blood and then rolled forward thirty years worth of advancements in martial arts expertise, fight choreography, and special effects? What if we eliminated damsels in distress? What if we not only avoided problematic cultural stereotypes but painted a world rich with interlocking well-understood cultures whose healthy interactions could actually enrich the plot and deepen its emotional impact?

But we must also evolve the audience’s expectations of what is motivating our hero. No longer will simple revenge or POW liberation suffice for us to sympathize with two hours of bloodshed. Like Khan, John’s wife has been taken from him and he’s looking for someone to blame. Like Khan, it is an act of truly random fate that sets him on his course out of his peaceful paradise back into the inferno of violence in which he knows, deep down, he belongs. Wick’s first chapter ends at something of a new, if terrible, equilibrium for both John and the underworld.

But by Chapter 2, a tentacle from his past has reached out and grabbed him. This time it is not random fate but simple, and inevitable, cause and effect, a force against which John has been fighting ever since he stopped killing. His resentment at ultimately losing that unwinnable fight causes him to rage-start the events that lead to Chapter 3.

Ever since Beowulf (the book, not the movie), we have used lone figures improbably triumphing in the face of nightmarish odds as a way for us to examine our own personal relationships with failure, adversity, and will. The action movie genre is the most direct way we have of continuing this conversation, and the John Wick franchise, especially Chapter 3, is its ultimate evolution. Our hero is undeniably human, but the true source of his “singular focus” is as alien to us, the audience, as his fighting ability. This obscure ambiguity is ultimately what marks the films in this franchise as the mature outcome of our culture continuing to chew on these same deep questions about death, violence, and redemption.

The true emotional weight of the importance of this franchise becomes fully felt in this latest installment. This film carries forth the promises made in the first two films, that simplicity in plot does not mean that any scene will be simple or predictable in any way, that elegance is not the opposite of realism nor does love make you a peaceful person. Here we have proof that intelligent action films need not be overwrought and navel-gazing. The human experience often produces simple emotions with simple causes and simple effects, and Chapter 3 is the apotheosis of the kind of art that can be made about that.