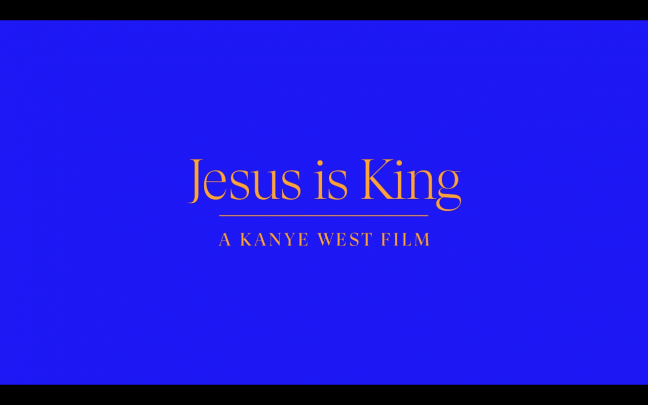 Iris in on a woman’s face. Her smile, infectious; the gleam in her eye, profound. While she is but one in a choir of many, her worship experience is foregrounded for us as spectators of Nick Knight‘s film of Kanye West‘s Jesus Is King (2019), an IMAX music video experience released in conjunction with Kanye’s foray into gospel music. On the IMAX screen, this woman’s face is the size of the walls of Jericho, and as the choir gets further into the song and her praise intensifies, the barriers of the iris framing her face tumble away as if the screen cannot contain her joy.

Set in the Roden Crater, an installation piece by James Turrell, Kanye and his Sunday Service choir lead by Jason White worship the King of Kings and Lord of Lords. Like a Yeezy fashion show, the choir files into the smoothly-shaped cylindrical basin of the crater. Their voices echo within this open dome-like observatory of the sky, and the framing of most of these sequences of worship lend the voice of the choir a Heaven-bound direction.

As anachronistic as it may seem, this work – an experiment in sight, sound, and faith – chronicles and presents the act of worship largely in the film language of silent cinema. The use of the iris was an optical mainstay of silent film technique, as it would draw one’s attention to specific subjects that the full frame could seemingly not emotionally convey. Here, the iris that is used throughout much of the film Jesus Is King not only dictates a more vertical gaze for viewers, but it is architecturally reciprocated by the circular shape of the opening of the Roden Crater.

Further, the utilization of intertitles (another staple of the pre-synchronized sound era) featuring scripture separate each song and place the audience in the mindset of worship. Were the selected verses, such as John 3:16 and Ephesians 2:8-9, read aloud rather than presented in full as individual intertitles, they would have take away from the introspective nature of this film. Left to read the verses on our own, we internalize their meaning and allow it to inform the action of worship on screen that follows each intertitle.

When the choir concludes their worship as the sky begins to darken with nightfall, there is audible crying, and brothers and sisters in Christ proceed to embrace one another. The sound of their hands and bodies coming together reverberate throughout the crater – their Earthly separation from their Heavenly Father above is palpable, but their fellowship together takes on a new meaning as their frail humanity is exposed.

From there, the film maintains its tone and form, but allows for Kanye to reimagine one of his own songs — “Say You Will,” from before he was born again – as a Gospel ballad. The camera rotates around Kanye, not unlike the 180°-turn that believers strive to make from their past iniquities. Like Saul becoming Paul, or any sinner becoming saved, this sequence draws out the essence of the film as the artist’s past becomes something new: a testimony.

Not unlike the fanatical attention to detail of buffing a car in Kenneth Anger‘s film Kustom Kar Kommandos (1965), which is a film notably set to a single song, Jesus Is King is not a work with an interest in telling a story. Even beyond that, it’s not a work concerned with notions of entertainment – this is a work of art. As the film comes to a close, one wishes there was more that the film had to offer (the album Jesus Is King features many songs that are not in the film), and yet the sincerity of the work and the consistency in tone that is maintained throughout is very satisfying. Whether this film will speak to nonbelievers is an interesting question, but the conviction of the sounds and images in Jesus Is King are surely worth anyone’s time. At 38 minutes the movie is comparable to a worship service, but it’s on the viewer to piece together the sermon.