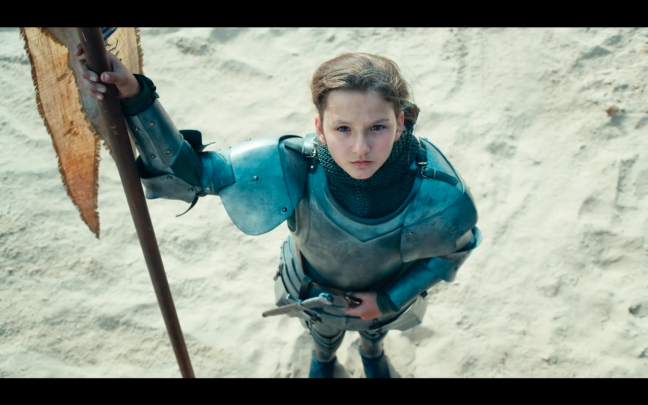 Joan (Lise Leplat Prudhomme) breaking the 4th wall during a song by Christophe.

A decade ago, the thought of Bruno Dumont being a director of comedies, even musicals, would have been laughable, but his cinematic journey away from the “grotesque” (as he described it to me at a Q&A in 2017) has better revealed the essence of his style. Still perhaps the closest figure in contemporary cinema to the stylistic legacy of Robert Bresson, Dumont has successfully distinguished his voice as a writer and director by pivoting to dramatic territory that is uniquely his own. (Bresson made one of the great films about Joan of Arc, 1962’s Process de Jeanne d’Arc.) With the aid of Charles Peguy’s poetry-laden plays, Dumont’s Jeanne (2019) provides a vision of Joan that is fresh and a persistent reminder of this figure’s place in French culture.

With Jeanne, we find the principal star of Jeannette (2017), 10-year-old Lise Leplat Prudhomme, back in the role of Joan, but she is no longer the playful girl tending to her father’s sheep. She is now the armor-clad commander of the armies of France. Her “voices,” which she claims are divine directives from God, are frequently asked about by the court of King Charles VII as France attempts to take territory back from the English. Unlike Dumont’s film set against the war on terror, Flandres (2006), Jeanne is not a film concerned with battles. Following the historical chronology of the battles leading up to the trial of Joan of Arc, this is a work building up to the death of a so-called heretic – the Passion of Joan.

The previous film Dumont made about Joan of Arc, Jeannette, was a heavy metal musical about Joan as a girl. Jeanne also has an anachronistic score, this time an electronic score by Christophe, but it is not a musical per se. Rather, Jeanne is a film about choreography, though not in the traditional sense of dance set to music. A sequence of equestrian choreography is the only true “dance” number in this film, and it’s a real delight to watch Joan as she and her knights brings their horses into a variety of formations, most notably the infinity symbol (as observed in an aerial shot). Just as Dumont aesthetically pared down the heavy metal dance numbers in Jeannette, focusing on feet as Joan jumps or capturing the transliteration of head banging as a substitute for prayer in long shots, here Dumont places emphasis on hooves as Joan’s horse elegantly steps to the slow beat of soldiers’ drums. 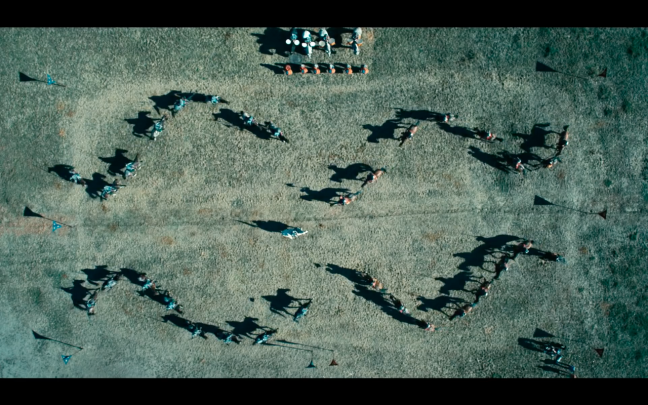 The score, when it is not serving merely as an instrumental accompaniment, features Christophe singing the internal battle in Joan’s soul while also contextualizing the brutality of combat that she and the people of France have seen. Dumont uses these moments of music to do the opposite of what one would regularly anticipate by allowing Joan of Arc to stare at the camera, motionless, for the duration of these songs.

As spectators, we know the story of Joan of Arc, and we actively engage that knowledge during these sequences of song. There is a choreography beyond our conception of dance or dramatic blocking – a cosmic choreography of history and drama. Joan is moving toward a specific fate, her death at the stake, and Dumont imbues the character of Joan with a feeling of self-awareness in regards to her destiny. This is not a film, like Carl Theodore Dreyer‘s The Passion of Joan of Arc (1928), that finds Joan crying before her adversaries in the Church. Jeanne turns to the clergymen leading the rigged trial against Joan, and it is in Benoît Robail‘s brilliant performance as Monseigneur Reginald de Chartres where the film’s sole tear is found. The corruption and hypocrisy of their methods in evaluating Joan’s heresy takes the spotlight. Their verdict was already determined, or choreographed, because their flawed theology lacks the nuance to be receptive to Joan (arguments aside that her claims of revelation from God are open to theological debate).

Compared to the high-spirited and imaginative Jeannette, the experience of Jeanne is less satisfying overall, but it is still a work of substance that asks compelling questions. It is a more somber effort, and Dumont is able to use the songs as a contemplative tool with almost every one of them serving as intermissions rather than attractions; it is almost an anti-musical. For those who are able to endure the tone and pace, Dumont rewards bountifully as the trial unravels into the strangest of gestural comedies. Robail is wildly dynamic, both in his manner of speech and in the strange “drunk with power” demeanor that he suddenly adopts late in the film as he grabs his crucifix and proceeds to rail almost incoherently against Joan. The pace of the dialogue begins to quicken, and the editing reciprocates this shift in style as a shot and reverse-shot structure moves us from face to face of the prosecution to the confident face of young Joan. Finally, a divisive and hilarious musical number causes the film to push the boundaries of taste with the utmost authorial confidence.

By the film’s finale, we are brought to the moment where all Joan of Arc tales end, but we are brought there with a vision of “natural grace” preceding it. Ordered to give her final prayer in her prison cell before execution, Joan notices a nest of wailing baby birds receiving an insect from the mother. She does not say her final prayer, and she goes to be burned at the stake, as we knew she would. Joan’s death serves a function for the viewer, one that Bruno Dumont is hesitant to deliver but provides in his own way.