I guess it wouldn’t be the Halloween franchise without a crappy sequel. 2018’s sequel-reboot from David Gordon Green was a surprise success, at least to this author. The unlikely pairing of a director known for comedy with one of the most iconic slasher franchises didn’t seem the most intuitive pairing, but it paid off in spades, with Flickchart declaring it the best sequel in the entire franchise.

With the rise comes the inevitable fall. Halloween Kills is an over-stuffed tonal mess that attempts to pivot between a satirical dark comedy and serious commentary on mob justice with all the finesse of a rampaging elephant. Picking up where the previous entry ended, the film transpires over the same night, as well as occasionally flashing back to 1978 for the town of Haddonfield’s frenzied reaction to Michael Myers’ campaign of terror.

Attempts to flesh out background characters can’t help but feel mistaken. Green’s initial effort threaded in just enough characterization to make you care, while delivering solid scares and brutal killing. This one, however, becomes tedious in its attempts to build up side characters, an impulse that feels like fan service. 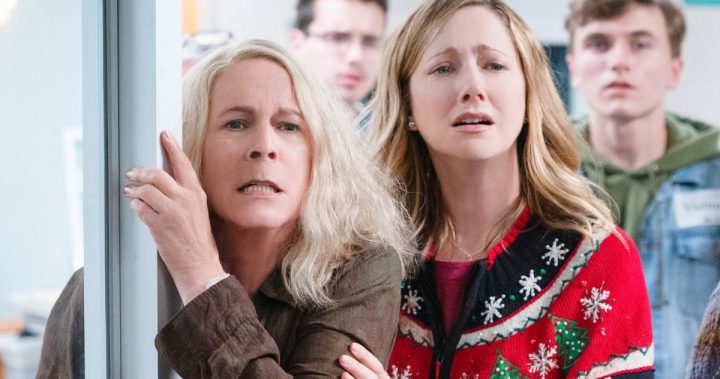 The biggest problem for this film is tone. Green is a competent director and can create stylish scenes when he wants; the shot composition of the 2018 film was one of its greatest strengths, and this one shows similar flashes of brilliance. But far too many scenes leave the viewer’s brain contorting, trying to determine what was intended to be comedy and what wasn’t. One biracial couple is playing with a drone before getting brutally murdered, and the awkward physical comedy just feels out of place. Another campy addition is a gay couple with the names Big John and Little John, which has to exist for comedy. There are indeed a few funny moments, but too few.

The casting is quirky. Much of the cast is comprised of comedic actors that have worked with Green before. Scott MacArthur, Michael McDonald, Charles Cyphers, and Jim Cummings all fill out the ranks of victims. Anthony Michael Hall also appears as one of the franchise’s few notable characters. The juxtaposition of broad comedy with brutal, dark violence just doesn’t work. The film also attempts to ponder fear and a town going crazy in reaction to a wave of violence, yet it plays out largely in a hospital — a nod to the original Halloween II. The result is a stilted experience.

This clash of comedy, horror, and commentary comes together through sloppy editing, as though the editor wasn’t quite sure how to arrange the footage. Perhaps another issue is that much of this film is build-up for a final entry in this new Halloween trilogy, which makes this movie feel like it’s treading water.

Is it fair to judge slasher films on story? If a viewer just wants brutal murders, Halloween Kills delivers. Michael Myers goes about his business killing various townsfolk. Yet after the 2018 film, this can’t help but feel like a letdown. Jamie Lee Curtis and Will Patton are wasted and lay around doing absolutely nothing for most of the movie, and the strengths of Green’s first work feel similarly abandoned.

Halloween Kills is a bizarre mishmash of a film that doesn’t satisfy. There are a few good scares, but too much misguided social commentary, and the jokes feel out of place. At least John Carpenter returns to provide a fun new mix of his original score. I hope Green can turn things around for the next one.

What did you think of the new Halloween? Make your own ranking of the series on Flickchart!