It’s been 20 years since Sam Mendes made his directorial debut with the 1999 classic American Beauty, which pleased audiences and critics alike. The movie was nominated for eight Oscars and won five, including Best Picture and Best Director — an impressive accomplishment for a rookie helmsman. Since that time, Mendes has made seven more films, including impressive outings in 2002‘s Road to Perdition as well as one of the top-reviewed Bond movies of all time, 2012‘s Skyfall. Both were nominated for several Oscars, but repeat victories in the major categories eluded Mendes.

Now that 1917 is receiving rave reviews, it may be his best chance yet at nabbing another top award.

For months leading up to the movie’s release, the hype surrounding 1917 centered on its “single take” style. Not since Birdman, 2015‘s Best Picture recipient, has a major motion picture used this technique. Though it seems like a gamble, even for a film in the war/action genre, the approach pays off in droves. The movie wastes no time immersing viewers in the grotesque, dilapidated trenches of WWI. We follow along two young lance corporals, Dean Charles Chaplin of Game of Thrones fame and the relatively unknown George MacKay, as they cross enemy lines to save 1600 British soldiers before charging into a carefully-planned trap by the Germans. Not only do the soldiers have less than a day to reach the battalion across treacherous terrain laden with traps, but Chaplin’s brother also happens to be on the front line. The sense of urgency is immediately apparent as the boys nervously begin their journey in the knowledge that time is of the essence and lives are on the line.

Once the journey begins, the movie barely allows time for breathers, and its fast pace is accentuated by the fact that the camera is ever-moving in a gorgeously fluid manner. As the boys slowly progress through previously German-held territory, becoming battered and bruised along the way, 1917 doesn’t shy away from depicting the horrors and ravages of war. Heaps of dead bodies and bloody, rat-infested bunkers feel real thanks to Mendes’ use of natural lighting, and the appalling conditions force the audience to sympathize with the plight of the two protagonists. 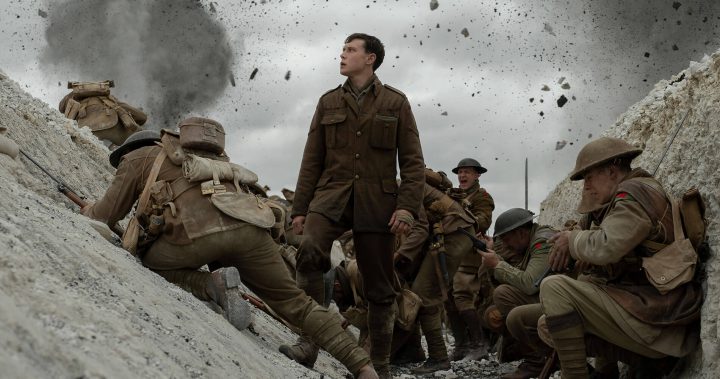 During the momentary breaks in action, we learn more about the soldiers themselves through charming dialogue and surprisingly funny exchanges, as well as cameos from A-listers such as Colin Firth, Mark Strong, Andrew Scott, and Benedict Cumberbatch. The dialogue and plot are quite impressive considering 1917 is Mendes’ first stab at screen-writing. However, Chaplin and MacKay are not to be outdone. Both actors show genuine displays of exhaustion, desperation, and perseverance, easily justifying the somewhat-surprising decision to cast them as leads. It is clear they have promising careers in dramas ahead of them, not unlike Timothee Chalamet and Lucas Hedges.

Most impressively, though, are the films’ many breathtaking sequences scattered from start to finish. Remembering to exhale throughout will be tough for many, as the tension is positively ceaseless. When the protagonists collapse on the ground out of breath, ready to fall unconscious, you too may try to relax, but good luck. 1917 is a clinic of thrills, laughs, and audible gasps. It is as close to all-encompassing cinematic perfection as a film can come, and is every bit as deserving of a Best Picture nomination as the year’s other front-runners like Parasite, The Irishman, Little Women, and Marriage Story.

Rank all films from 2019 on your own Flickchart here >