The Great Disney Reel Rumble Retrospective continues! Last time, we wrapped up the Golden Era of Disney with a three-way bout between the final films of the era. Now we move on to the next era of Disney, a period that has not fared well over time and is considered a downturn for the studio. 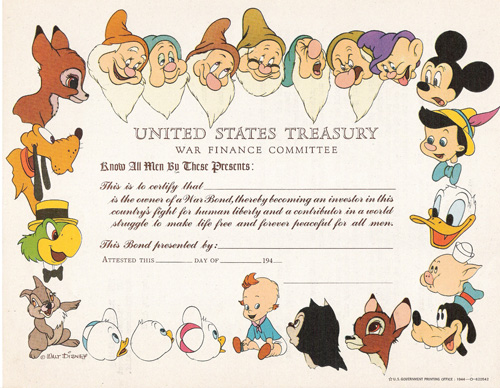 The Wartime Era, also known as the Package Era, is the period lasting from 1943 until 1949. So-named for coinciding with the U.S. entry into WW2, this era represents a time when Walt Disney Animation Studios was strapped for cash as World War II raged on and the United States was devoted to the war effort. You may recall that WW2 ate into the profits of past films from Disney as the European markets were unavailable. With war now swallowing the US economy, Disney and company found themselves creatively strapped as well.

Each of these films is epitomized by not being one long-form story, but rather a series of shorter stories packed together into one film release. Disney Studios was concurrently being tapped by the country to produce anti-Nazi propaganda and to take other actions to support the war effort, and thus there was less time for creative projects. These works they did release are considered to lack in quality compared to the Golden Age. Their rerelease on Disney+ is the first opportunity many people have had to see them. Could there be hidden gems lying in this war-torn wasteland? 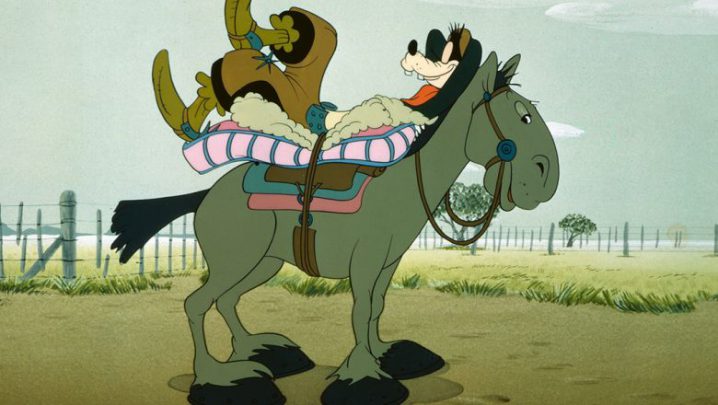 Before the United States entered the war, the US Department of State had commissioned a film from Disney to help weaken ties between Latin America and Nazi Germany. Led by Nelson Rockefeller, Walt Disney and a group of animators traversed the nations of South America and captured live-action footage that eventually worked its way into Saludos Amigos. North American audiences were shocked by the images, as they generally imaged Latin America as a bunch of huts and dirt. Images of modern-looking cities were a revelation and helped changed U.S. attitudes towards the southern part of the West. Film historian Alfred Charles Richard, Jr. says that Saludos Amigos “did more to cement a community of interest between peoples of the Americas in a few months than the State Department had in fifty years.”

Disney and his animators visited Brazil, Chile, Bolivia, Peru, and Argentina, making sketches and developing animations to use for the film. They took in the culture, listened to the music, and explored traditions of various peoples throughout the southern hemisphere. Original music was composed for the film as well as new takes on classic Brazilian tunes. The film was the shortest “feature” that Disney ever made, at barely over 40 minutes long. The finance-strapped Disney faced a strike from his animators, the opening of a new studio location, rising production costs, and falling box office revenues, and even with financing from the government he needed to make something fast.

Saludos Amigos had its world premiere in Rio de Janeiro on August 24, 1942 before opening the next year in the United States. It would later be reissued in 1949 alongside Dumbo. It did fairly well at the time, adjusting for low box office returns on the whole due to the war. By 1951, it had grossed just over a million dollars with half of that coming from the US and Canada. 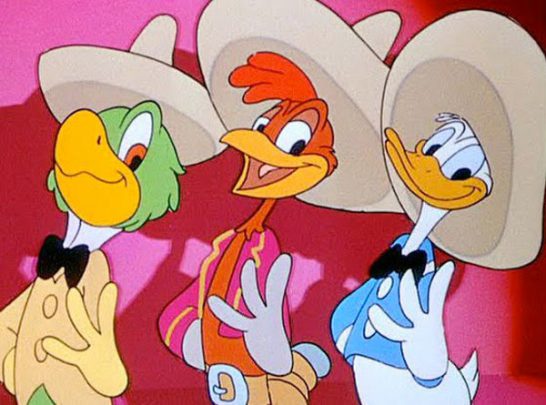 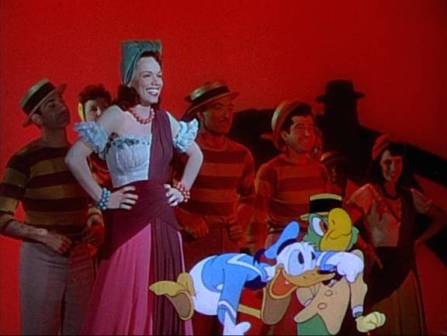 It’s tough to rate either of these films for story, given their nature as a series of connected shorts. Saludos Amigos is comprised of four short sequences: Donald Tuck visiting Lake Titicaca and meeting an odd llama, an anthropomorphic Chilean airplane named Pedro, Goofy as a Texan cowboy traveling to Argentina and learning about their gauchos, and Donald traveling to Brazil and meeting a now established member of the Disney stable, José Carioca, a green parrot. While none of these sequences is particularly complicated or in-depth, they have their own odd joy to them. There is occasional footage of the real-life nations featured as well as animation.

The final two sequences are the stronger ones. Goofy as a Texan cowboy while “Deep in the Heart of Texas” plays is a fun draw, and seeing the cross-cultural exploration between America and Argentina has at least something of interest. Donald making friends with José and learning the samba makes for a good musical ending to the film. Unfortunately, this is the most that can be said for story. All of these segments are pretty light on any real story-telling.

The Three Caballeros doesn’t fare much better. Composed of even more sequences, it is all tied together around the idea of Donald Duck’s birthday and seeing him open birthday gifts from his Latin American friends. While these two war films are among the only Disney Animation Studio features to involve the classic stable of original Disney characters, they are not used well. There is a surprising amount of sexual tension in this film as Donald’s blood gets pumping at the sight of live-action Latin American ladies. Yes, it goes there.

There is a little more interest in some of these segments with José the cigar-smoking parrot returning, and the introduction of Panchito Pistoles as the third caballero. Donald, Panchito, and José get into a variety of misadventures, though Panchito is barely in the film. Once again, the best parts are explorations of cross-culture experiences such as seeing Mexican Christmas tales or a truly surrealistic sequence to cap the film off. Matching the pink elephants sequence from Dumbo for zaniness, this combination of animation and live-action gets truly bizarre as Donald gets the hots for the Latin American dancers. It is a stand-out among a series of otherwise unremarkable turns.

While neither of these have particularly compelling stories, The Three Caballeros does feature some more interesting turns, and seeing the three birds together is a minor iconic Disney moment. The ending surrealism is the most artistic portion of either film.

Continuing a theme of indistinguishable quality between the two, the music in both of these films is fairly similar. Both are heavily Latin-influenced and largely score-based. These are not Disney films with the typical mixture of iconic songs and moving instrumental passages. Instead, the music of these films attempts to showcase the sounds of their locales. While this may not make them an iconic part of the Disney musicography, they are well done in bits and fun to listen to. Saludos Amigos captures a variety of sounds, from light woodwind-filled dances to rolling brass sambas. When there is singing, the lyrics are often in their native Spanish or Portuguese. Saludos Amigos is home to the song “Aquarela do Brasil,” which became an international hit after appearing in the film and became the first Brazilian song to be played over a million times on American radio.

The Three Caballeros has its own theme song, used to punctuate Donald, José, and Panchito meeting and dancing together. It is home to rolling dance numbers of its own as well, and once again captures the spirit of Latin America. It features many more songs than Saludos Amigos as well as beautiful love ballad sung by Dora Luz to Donald Duck. Though it is very similar to the music from the prior film, it is more varied and features a few stronger tunes. 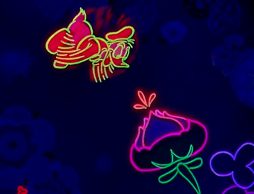 Saludos Amigos does show its cheapness. With a smaller budget and fewer animators, there is less detail than in the Golden Age productions. While one can appreciate the animators’ efforts to authentically capture what they saw in the countries they visited, it doesn’t stand out like the iconic scenes from Bambi or Fantasia. There is also plenty of live-action mixed in, making it unique among the Disney Animation Studios pantheon, though maybe not in a good way for this category. A few attempts at impressionistic takes on locales, such as depicting Texas with canyons from above, work well enough but only just.

One can’t say too much more for The Three Caballeros. It is likewise done on the cheap in comparison to the lavish, detailed animation of older Disney films. Live-action is mixed into the production as well with the distinct scene women dancing with Donald and his fellow birds. It is reminiscent of later blends of live-action and animation, such as in Who Framed Roger Rabbit? and Mary Poppins, so it is impressive to see the trick in its early stages. Likewise, the aforementioned surrealistic scenes near the ending of the film feature a beautiful use of color, creativity, and plain weirdness. For that reason, it gets the edge. 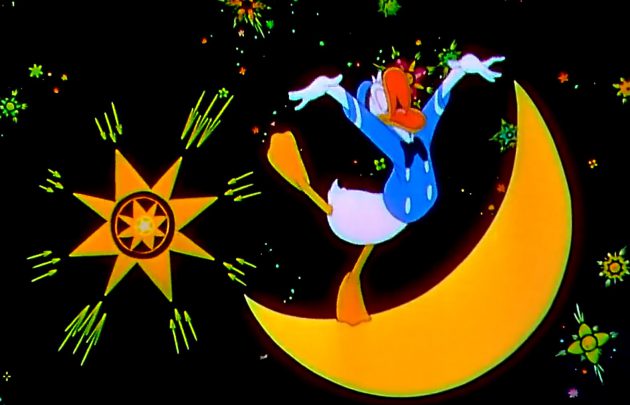 These are both an interesting representation of an odd period in Disney history. Despite falling into the category of forgotten Disney, they are distinct for several reasons. They feature classic Disney characters, helped communicate international friendliness and bring Brazilian music into America, and introduced the characters of José and Panchito who are used on Disney shows and in rides at Disney parks to this day. These movies have had some impact, small though it may be.