Reel Rumbles: Peter Pan vs Lady and the Tramp The Great Disney Reel Rumble Retrospective returns! This time, we tackle the second two films of the Silver Age of Disney. This is actually a very suiting pairing, as both feature austere British folks as characters and play around with class ideas in a British setting, though obviously through the lens of fantasy. Let’s get to it! 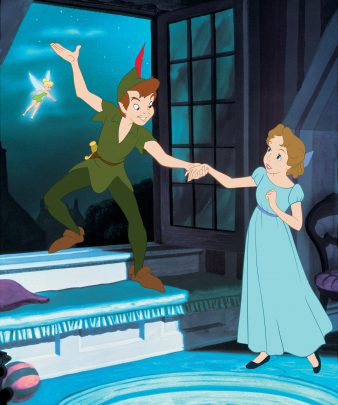 Peter Pan was actually considered by Disney for his second film – a running theme with a lot of these Disney films where nearly all of them were in various stages of development years before being released. Unfortunately for Walt, Paramount held the film rights to the story. However, by 1939 Disney was able to get animation rights to the play version and completed a story reel. As they developed the film, Disney considered a variety of animators and story ideas, but Walt boiled it down in 1940 to starting with Peter’s arrival at the house, eschewing backstory.

But as been previously described in this series, World War II came and production was suspended. After the war ended, Jack Kinney took over as director in an effort to keep him from leaving for MGM. Disney considered a number of voice actors from Cary Grant to Jean Arthur for the roles, and Disney pushed Kinney to quicken production. At this point, Cinderella, Alice in Wonderland, and Peter Pan were all in the works. The story went through many alterations and Disney eventually went forward with the other two films first. Early versions of Peter Pan had fairly different tones and were generally darker than the final product. Captain Hook is killed by the crocodile in one draft, the Darling parents mourn for their lost children, and there are other pretty dark directions as well.

The final film debuted in February 1953. It was a modest success at the time, earning $7 million on a budget of $4 million. Subsequent re-releases have vastly raised its box office grosses. Critical reception was largely positive, with many praising the animation, though some criticism came from changes to the play and the average music by Frank Churchill. It has become one of Disney’s most well known films, with a ride in the Disney Parks, and it is represented well in video games and other derivative media.

The inspiration for Lady and the Tramp came in 1937 when Joe Grant was inspired by the antics of his English Springer Spaniel, Lady, and how she got shoved aside by his new baby. Disney liked the idea and had Grant start story development. Throughout the 30s and early 40s, story development took a variety of directions, but Walt didn’t love any of them. Walt later read the short story, “Happy Dan, the Cynical Dog” published in Cosmopolitan magazine in 1945. He thought a good idea would have Grant’s Lady fall in love with a cynical dog like the one in the story, so he bought the rights to it. Several names were cycled through for the ruffian dog until Tramp was chosen. At the same time, Lady’s neighbors changed, the malicious nature of the Aunt Sarah character softened, and Lady’s owners got new names. Though Grant left the studio in 1949, his drawings and story were continually pulled for the film. By 1953 Lady and the Tramp was coming together, and Disney insisted on the author of the short story writing a novelization of the film in order to prepare audiences. Joe Grant never received credit for all of his ideas.

Lady and Tramp released in 1955 and earned more money than any other Disney film since Snow White. It earned $6.5 million on a budget of $4 million. Like many Disney films, subsequent re-releases boosted its box office exponentially. Contemporary reviews were actually fairly negative. Though it released in CinemaScope, critics piled onto it for its lesser animation and over-sentimentality. However, it has since become a much-loved classic, and it even earned a place on the AFI list of Best Romances, largely for its iconic spaghetti-eating scene. Peter Pan‘s story, underneath all of the various adventures with mermaids, pirates, and Indians, is a coming-of-age tale. While there is some broad comedy throughout, the film ultimately taps into some deeper ideas. The young Wendy insists at the beginning of the film that she never wants to grow up and wants to play around with her younger brothers forever. The ousting of their dog, Nanny, troubles her as she feels the warm blanket of childhood being thrust off. The titular green-clad youth then flies into her life to take her and her brothers to a land where they never grow old, aptly named Neverland.

The middle of the film shifts to comedy. From the over-the-top antics of Captain Hook and his loyal Smee evading a hungry crocodile, to the petty jealousies of Tinkerbell over Wendy, and the fairly racist depictions of Native Americans, much of this film seems low-brow. But the strong points of the film are strong indeed. Wendy realizing that growing up isn’t so bad is a really solid arc, and even the ageless Peter Pan learns some maturity and realizes that he and his Lost Boys are maybe not the best example for other children.

Bobby Driscoll‘s voice performance as Pan is delightful and fun. He captures that youthful swashbuckling exuberance well. Hans Conried is also good as Captain Hook, capturing an odd sort of British austerity that is exaggerated and thrown into a pirate blender. Its a fitting exaggeration given the metaphor of Hook serving as the stand-in for the the children’s father (Conried also voices Mr. Darling). This dichotomy makes for the great ending of the film when Wendy and her brothers are taken back to London and Wendy awakens on the balcony. Her father speaking of seeing a ship once when is a child is a great reminder of the power of childhood and the importance of maintaining a sense of wonder and innocence even after growing up. It’s one of the loveliest endings in Disney history.

The story of Lady and the Tramp is a classic romance story. Two people, or in this case dogs of different backgrounds come together despite circumstances pulling them apart. This is mixed in with Lady’s owners getting a new baby and Lady feeling her owners’ attention pulled away. Much of this film is fluff, with Lady getting stuck outside when Aunt Sarah comes to watch the baby and having to navigate a wilder world than she is used to. Then Tramp arrives; cue the romance.

There are affecting moments throughout the film. The iconic spaghetti scene is romantic in a very cute way. Walt actually wanted to remove the scene, thinking it wasn’t romantic and would look silly. Walt’s instincts were off, as it has become of the most iconic images in Disney. The world can thank Frank Thomas for his hard work at animating it and convincing Walt to leave it in.

The themes of Peter Pan ultimately win out. Its strong points outweigh those of Tramp, though Tramp‘s fluff is arguably of a little higher quality. It certainly doesn’t have the racist caricatures of Native Americans present in Peter Pan. Still, the powerful moment of seeing the Darling family look out the window in the ship-shaped cloud is what Disney magic is about.

While Peter Pan has no huge standout numbers, there are plenty of smaller songs that are pretty well known. The entire soundtrack replicates the lush choral singing of many of these Silver Age Disney films. “You Can Fly!” is a joyous introduction to the wonders of childhood innocence. While the theme park ride now sports the most memorable version of “A Pirate’s Life,” the movie has only an early version of the song. You can’t forget the delightful military drum march of “Following the Leader,” a wonderful spritely tune as the Lost Boys and the two Darling boys traipse through the jungle. As for “What Made Red Man Red,” the less said the better.

If one thinks the Lady and the Tramp score is similar, they’d be right. Both are done by Oliver Wallace, who taps into that unmistakable 50s lushness. Lady and the Tramp on the whole is lacking for memorable tunes, though. There is “The Siamese Cat Song,” which is among the more memorable parts of the film as the faintly Asian strings accentuate the cats’ taunting of Lady. There’s also “What a Dog/He’s a Tramp”, which has a nice jazzy swing feeling. The rest of the soundtrack is pleasant, if not noteworthy.

Neither movie enters the realm of all-time noteworthy Disney music. But Peter Pan does offer some fun sing-alongs. The joy of “You Can Fly!” is elating and definitely the highlight between the two films. 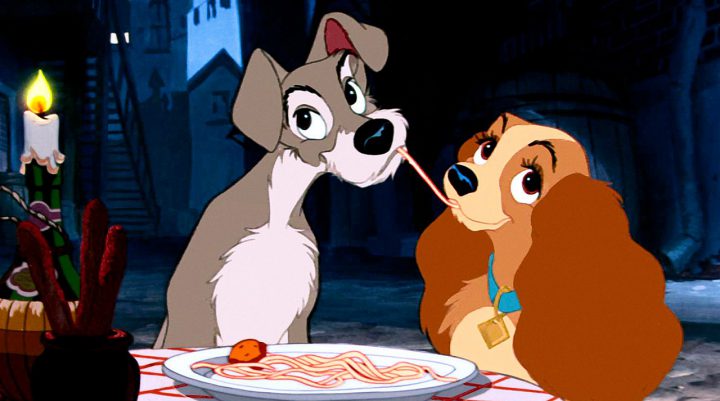 Peter Pan‘s animation is bright and colorful with some lush backgrounds. The depiction of the mermaid’s hole uses beautiful blue and green tones. Captain Hook’s look is iconic, with a bright red jacket and long thin mustache to twiddle about. Peter Pan’s look is also very well crafted with his green cap and tunic. Disney’s skills at animating humans also continues to show improvement, with very expressive characters showcasing how far the studio has come.

Lady and the Tramp also has very strong animation. The dogs are very expressive and their personalities come through in their animation. The iconic spaghetti scene is beautifully drawn with rich navy blues, a bright red checkered tablecloth, and the spaghetti itself is richly detailed. Also worthy of highlight are the landscape depictions of the small town of the story and the arrival of the baby. These are very well done scenes and convey emotion and atmosphere well.

While both films have some great animation, Lady and the Tramp will get the leg up here. From the dogs to the Siamese Cats and more, the quadruped-focused film showcases all of the capabilities of the studio to this point.

Winner: Lady and the Tramp Lady and the Tramp has some great singular moments and the animation is a high point. But Peter Pan‘s evocation of the loss of innocence is just too successful, and it has the better music. Captain Hook is as iconic a Disney villain as Pan is as hero. Both stories include a bit of fluff and broad humor, but Peter Pan‘s score and ability to pull on the heartstrings lets it fly here. For us at Flickchart, we’re looking at the second star to the right and heading straight on til morning – Peter Pan is the winner!

Lady and the Tramp

Rank all of Disney’s work on Flickchart today!