Reel Rumbles: Melody Time vs The Adventures of Ichabod and Mr. Toad

Welcome back to the Great Disney Reel Rumble Retrospective! We reach the end of another era here with the final two films in the Wartime Era of Disney. These are the last package films before Walt Disney Animation Studios resumed making full feature-length story films. Though this hasn’t been an era of terrible films, these definitely show the cash-strapped and creatively-deprive nature of the era. 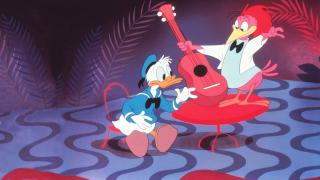 Melody Time is the last true anthology film of this era, as the other entrant here contains only two stories. It’s also the last film to feature Donald Duck and José Carioca together until Who Framed Roger Rabbit? Though considered part of the Wartime effort, the movie started coming together in late 1947, well after the war had ended. But Disney and company were still recovering from the shortages of animators and from having been commandeered by the U.S. military, and they still had lots of lightweight projects floating around the studio. Though longing to return to full-length fairy-tale sing-alongs, Disney packaged together seven mini-musical stories for release in late 1948. The aim was to capture the same success as Make Mine Music, an imitator of Fantasia. Like Make Mine Music, Melody Time uses modern music to maximize profitability as opposed to the classical music of Fantasia.

The film came out in 1948 and made a box office of $2.56 million on a budget of $1.5 million. It also received generally unfavorable reviews, though a few spare publications gave it praises for the animation and variety of stories. The modern-day reception is likewise fairly mixed, though it has earned some appreciation for its technical merits. Like several of other older Disney films, there is a scene of smoking in the film that was usually edited out of VHS and DVD releases prior to the arrival of Disney+. The “Pecos Bill” segment of the film has been referenced multiple times in Frontierland in the Magic Kingdom in Orlando. 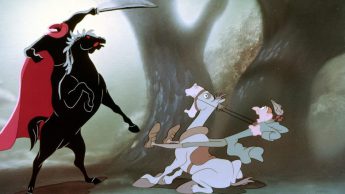 Like Fun and Fancy Free before it, The Adventures of Ichabod and Mr. Toad combines two stories together to make a feature-length film. The seed of this feature was planted in 1938 when several animators pitched the idea of adapting the book The Wind in the Willows. Walt allowed them to move forward, and the animators began to work on it after finishing Bambi. The Disney animator’s strike began shortly thereafter, delaying production. After the strike ended, Disney got a loan from the Bank of America, but he was restricted to working only on shorts and on features already in an advanced stage of production. The Wind in the Willows remained on the shelf.

Production picked back up after in 1946 as production on a feature-length adaptation of The Legend of Sleepy Hollow was simultaneously beginning. The idea to combine the two films arose — as well as making an adaptation of Roald Dahl’s The Gremlins, which fell through. Basil Rathbone and Bing Crosby signed on as narrators to broaden the financial appeal of The Adventures of Ichabod and Mr. Toad. It received positive critical review upon release in 1949 and earned a box office of $1.625 million, which was a drop-off from some of these anthology works. Modern reviews continue to treat it favorably, an unexpected positive note at the end of this era of cheaply-made Disney work. 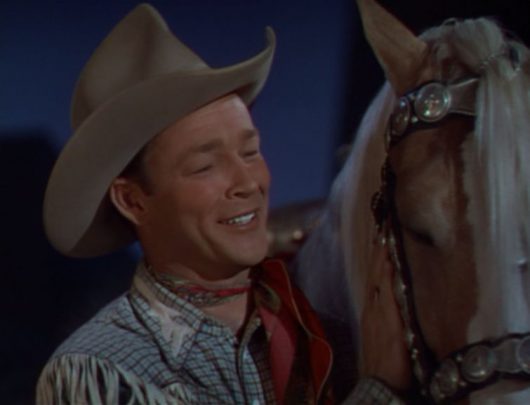 Melody Time consists of seven different segments of varying quality. It opens with two musical shorts, both in imitation of that great Fantasia style. One features a bee fighting off musical notes while the other uses ice skating. Other shorts include a tugboat trying to imitate his father in a classic Disney emotional pull, a recitation of poetry over a series of changing scenes, and another round of Latin America culture in the form of Donald Duck and José Carioca dancing to samba music. The highlights however, are the two longest segments. One is a recitation of the legend of Johnny Appleseed, a well-known America tall tale. The segment tells most of his life story and does a good job of conveying the emotion at the center of story, developing some genuine pathos via the use Dennis Day as narrator. The other long segment is “Pecos Bill,” based on a Texas legend. This telling of the story features country music legends Roy Rogers, Sons of the Pioneers, as well as Bob Nolan and Trigger in live-action segments. This is another wonderful American folk tale, and the beautiful country music from Rogers and company make it a highlight.

The Adventures of Ichabod and Mr. Toad likewise features two well-told stories. The first segment, narrated by Basil Rathbone, tells a rather farcical tale of Mr. Toad dealing with mania before being put to trial and falsely imprisoned in the Tower of London. Toad is eventually exonerated after the truth of the crimes are discovered, but the hapless amphibian falls back into his follies at the end. The other segment is a fantastic animated telling of The Legend of Sleepy Hollow, which shares a theme with the Mr. Toad story in the sense that the protagonists are very flawed, and face consequences for those flaws, yet remain ultimately likable. Ichabod Crane is bullied and treated poorly by a presumed Disney-like villain, and Crosby’s voice adds a nice layer to the affair.

There’s decent storytelling scattered across both of these movies, but the sweet heart of the two American folk legends from Melody Time works best. The animation allows the impressionistic, emotional undertones to come through. Whether it’s Roy Rogers singing country across Texas prairies or Johnny Appleseed joyously spreading the gospel, these stories are great representations of American culture. 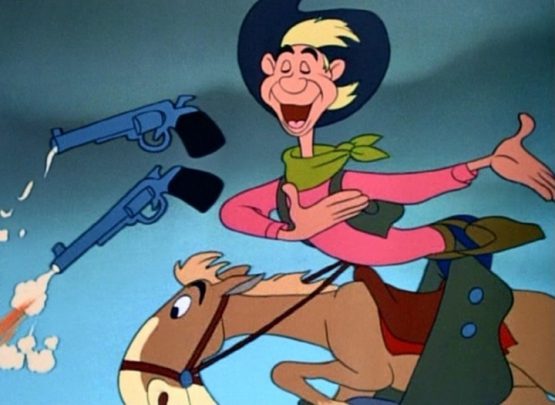 Melody Time features a variety of different music across its segments. The Andrews Sisters return to sing a fun pop harmony that’s been in several other Disney films. Contemporary 40s pop music from Dennis Day to Frances Langford and Ethel Smith comprise a slate of fun, upbeat tunes that are representative of the music of their time, if somewhat forgettable over the long run. The highlight of the soundtrack are the songs “Pecos Bill” and “Blue Shadows on the Trail,” both performed by Roy Rogers and the Sons of the Pioneers. These are some great classic country melodies and harmonies and make for a potent ending to the film’s soundtrack. None of these are as noteworthy as the songs from Golden Era of Disney, but they are pretty good in their own right.

In a first for this retrospective, The Adventures of Ichabod and Mr. Toad has little noteworthy music to speak of. The film focuses mostly on the narratives, and the only real music present is background score. It’s not bad, but it’s fairly standard and mostly unmemorable. 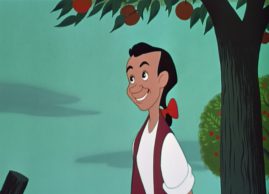 Like most of these anthology works, the animation across the various segments of Melody Time vary in quality. Some focus on realistic portrayals of humans and environments, such as the opening ice skating segment, while others focus more on impressionistic use of color. The segments were created apart from each other and only later pieced together to form a feature-length film. Some are fairly stripped-down and lack that lush Disney quality, while others are sufficiently impressive.

With only two portions, the animation in The Adventures of  Ichabod and Mr. Toad is more focused and effective. The Sleepy Hollow segment contains vivid characters, and the depiction of the flaming Headless Horseman is a great, nightmarish monster in the vein of the Queen from Snow White or Chernabog from Fantasia. The animation of the Mr. Toad portion likewise presents a bright, expressive main character. Though neither of these segments matches some of the fantastic animation offered in Bambi or Fantasia, they are some of the best work we’ve seen in this era.

Though Melody Time‘s impressionistic bits are nice enough, they don’t quite match up the strong workmanship of The Adventures of Ichabod and Mr. Toad. The Headless Horseman is easily one of the best animated characters from this era of Disney, and it anticipates some of what Disney would put out in the 60s and 70s.

Winner: The Adventures of Ichabod and Mr. Toad

And the winner is… 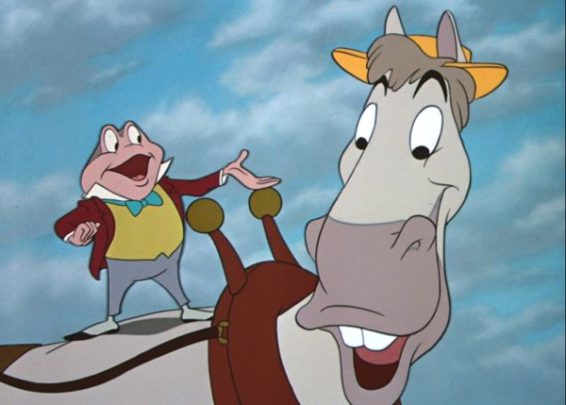 These two final works from the Wartime era feature some unexpected bright spots that contain genuine Disney magic. Melody Time offers solid music, and its telling of two noteworthy American tall tales have become definitive examples of those stories. Despite these advantages, the more focused The Adventures of Ichabod and Mr. Toad contains some of the best-looking animation in this era, and their stories are effectively told. It unexpectedly offers the most complete package in the package film era. Melody Time has strong individual components, but it suffers from being another pale imitation of Fantasia, and is wholly repetitive after Make Mine Music. For these reasons, The Adventures of Ichabod and Mr. Toad is the winner.

Wartime Era Winner: The Adventures of Ichabod and Mr. Toad!

And with that, the package era or Wartime era is over. It was a creative ebb for Disney reflecting a lack of money, manpower, and creative impulse. Yet there are unexpected bright spots in each of these movies, and none of them are terrible works. Their comparative blandness makes it no surprise that they are largely forgotten in the Disney canon. Yet little sparkles, whether some nice music or a storytelling beat or just pure weirdness, do make these worth seeing at least once. As for who has the most complete package, the answer is clear: The Adventures of Ichabod and Mr. Toad wins the era. After this, Disney went back to full-length feature storytelling, as we will see when we resume this series next time!

The Adventures of Ichabod and Mr. Toad