Reel Rumble: “Make Mine Music” vs “Fun and Fancy Free” 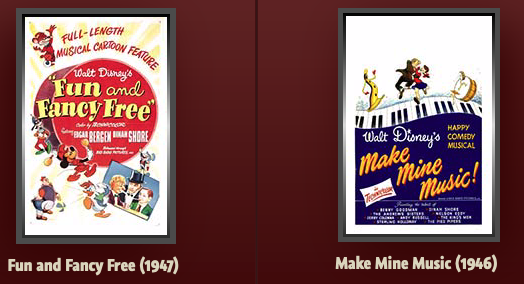 Welcome back to the Great Disney Reel Rumble Retrospective! Last time, we started the Wartime Era of Disney with two Latin American-themed films. This time, we continue with two more anthology films, though not of the Latin American flavor. One of the multiple package films made to keep Walt Disney Animation Studios running during WWII, Make Mine Music was released in 1946 shortly after WWII ended. As opposed to the two Latin films that preceded it, Make Mine Music was composed of numerous undeveloped and partially-development film ideas. Many of Disney’s animators had been sent off to war and Disney was doing everything possible to keep the doors open. Make Mine Music took various segments, ten in total, and set them all to music, not unlike Fantasia. Indeed, one of the segments here was originally intended for use in Fantasia. Disney had planned to continually rerelease Fantasia, adding and subtracting segments each time. But when it made less than both Saludos Amigos and The Three Caballeros, that idea fell by the wayside. The remaining segments joined some others lying around to comprise Make Mine Music.

It debuted to a $3.275 million box office return on a budget of $1.35 million. Make Mine Music received mixed to positive reviews, meaning it was success enough for Disney. It also entered the 1946 Cannes Film Festival. Despite being somewhat forgotten today, as are most of these wartime films, it is represented in small ways throughout the Disney parks.

Production on what became Fun and Fancy Free began as early as 1940. In the late 30s, Disney was worried about Mickey Mouse’s waning popularity. As part of an effort to restore Mickey to the limelight, some animators proposed producing a Jack and the Beanstalk tale with Mickey in the title role. Disney laughed at the idea at first, but he eventually gave it the green light. Animation began in 1941 shortly after the early drafts of Dumbo were done. Six months later, the first 50 minutes were complete. However, WW2 and the Disney animator’s strike put Disney in the red, and production on what was now called The Legend of Happy Valley was put on hold.

Meanwhile, production on Bongo began. This was supposed to be a sequel to Dumbo, but that idea was later dropped and various character models were used until the character of Bongo finally become a bear. The project was supposed to use a highly realistic animation style. The script was finished on December 8, 1941, the day after the attack on Pearl Harbor. That same day, the US military commissioned Disney to produce propaganda, and pre-production halted on Bongo as well as on Alice in Wonderland and Peter Pan.

As the war raged on and Disney struggled to make money, they decided to smash together Bongo and Mickey and the Giant Beanstalk. Walt felt the animation on neither was good enough to make a worthy standalone feature. Nevertheless, he voiced Mickey for the final time in this project, having done so since the character’s inception in the late 1920s. Jiminy Cricket also found his way into Bongo and sang a song. Fun and Fancy Free finally came out in 1947, after the war ended, and took in $3 million worldwide. Like Make Mine Music, it received middling to positive reviews. 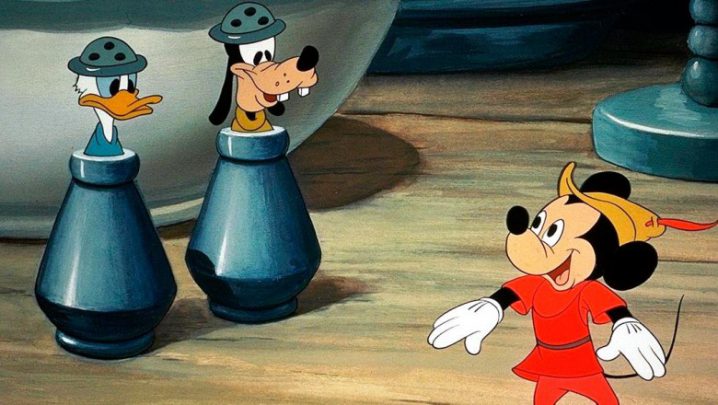 Once again, judging these films on story is not particularly easy. Make Mine Music is like Fantasia but with even less of a framework. It pretty much just links segment after segment together without any kind of story. The segments themselves are of varying qualities. The first segment on the Hatfields and McCoys has been cut due to violence and I couldn’t find it. The second segment, “Blue Bayou,” is the Fantasia leftover featuring flying egrets. The next two segments, “All the Cats Join In” and “Without You,” likewise are not really story-driven, just animation set to songs. “Casey at the Bat” does tell a story based on the poem of the same about a baseball player whose arrogance leads to his failure on the diamond. One of the better segments, “Peter and the Wolf,” is still referenced in some Disney parks today. Like the Russian musical composition, it uses a specific instrument for each character.

The final two segments are the highlights of the film. The penultimate, “Johnny Fedora and Alice Blue Bonnet,” is the charming story of two hats who fall in love. There isn’t much more to it than that, but a fight for love is often enough. It was later released in theaters on its own, just like most of the other segments. That Disney and the animators could craft a decent story about a love affair between two hats is a testament to their talent even in a stripped-down format. The final segment, though, is the best one. Titled “The Whale Who Wanted to Sing at the Met,” it follows a sperm whale named Willie who has operatic singing talent and wants to sing in a grand opera. The story follows his attempts to be heard, though he is hunted and persecuted and ultimately killed by whalers. This surprisingly dark ending is belied by Willie ascending into heaven and being able to sing for eternity. Still, this adds some surprising sense of melancholy to the film and gives it some dramatic punch.

Fun and Fancy Free has a little more of a story to it, being compromised of just two segments containing more or less full-length stories. The first one, “Bongo,” follows a young bear cub who lives in a circus and longs for freedom. This is all charmingly introduced by Jiminy Cricket and the voice of Dinah Shore. Bongo eventually breaks free into the wild and battles for the romantic affection of a female bear named Lulubelle. This has the elements of a charming romance, though again it’s nothing too complicated. These segments are linked by a strange live action sequence in which Edgar Bergen, alongside two ventriloguist dummies and a young girl, introduces the story of “Mickey and the Beanstalk.” Mickey, Donald, and Goofy act out the familiar Jack tale with some whimsical Disney comedy thrown in. The giant, Willie, displays superpowers, but eventually Mickey and company prove triumphant. The film returns to the live-action world only for Willie to return and bring an end the film by stomping through Hollywood.

Like Fantasia, Make Mine Music features a variety of pieces that score the animated segments. Unlike Fantasia, Make Mine Music focuses on contemporary rather than classical pieces. The artists range from the Ken Darby Singers to Benny Goodman and his Orchestra to Dinah Shore and Andy Russell. Disney hoped to bring in younger audience and make better box office after the disappointment of Fantasia. While some of the music is entertaining, they more forgettable than the Fantasia pieces and tend to run together. There are no iconic Disney songs here.

Fun and Fancy Free does include some actual songs, though again none stand out in the Disney canon. Jiminy Cricket sings a charming song called “Happy Go Lucky Fellow/Fancy Free” and Dinah Shore once again sings several songs including “Too Good to Be True” and “Say It with a Slap.” The best songs of the feature, though, come in the second segment, “Mickey and the Beanstalk.” Here we get the upbeat “My What a Happy Day,” which may be familiar to some. The classic Neopolitan song “Funniculi funnicula” is featured as well, sung by Goofy and Donald Duck. Even Willie the Giant gets a number in the form of “Fee-Fi-Fo-Fum.” Ultimately, this collection of songs proves better and more charming than any of the orchestral bits of Make Mine Music. Here, perhaps, is Make Mine Music‘s strongest advantage. Though it’s apparent that several of the segments were stitched together on the fly, others do have a beauty to them. The Fantasia leftover “Blue Bayou” is beautiful and uses multiple shades of blue to depict the flying birds. The segment “Two Silhouettes” which features two rotoscoped ballet dancers. Meanwhile, Fun and Fancy Free‘s animation is nothing to write home about. While not terrible, it doesn’t match anything in the Golden Era of Disney films, being much more simplistically rendered. There are some visual jokes throughout, but many aspects of the movie seem hastily put together, a reversion to the basic level of detail in Snow White and the Seven Dwarves but without that movie’s artistic charms. Even Make Mine Music‘s weaker elements exceed the highlights of Fun and Fancy Free. 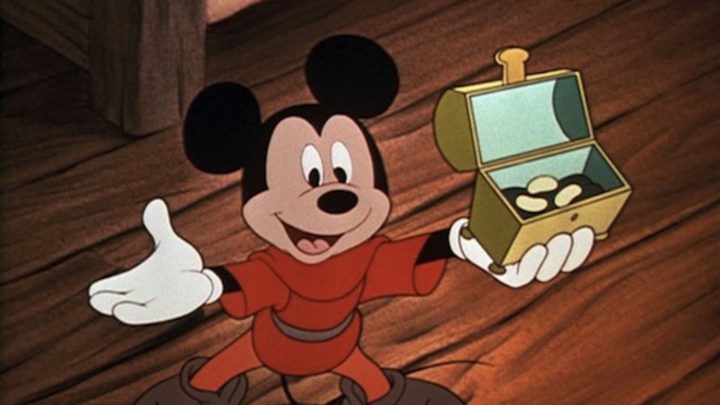 The Wartime era films are mostly forgotten. The pair of Latin American movies we featured last time had some interesting cultural aspects and introduced characters that endure in the Disney canon, but these two stitched-together works added little to the studio’s arsenal. They represent Disney at a low point as the studio struggled to keep going. Fun and Fancy Free is the winner of this matchup thanks to its tighter focus and more pleasant music.