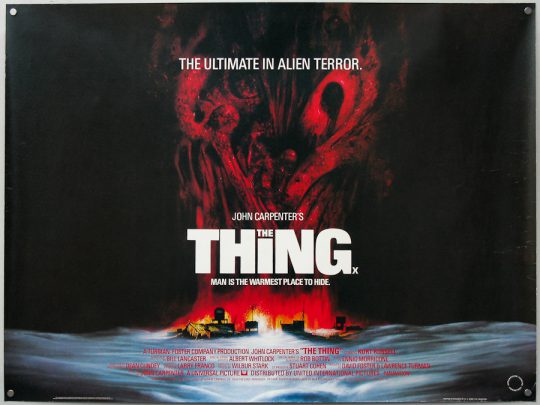 I remember standing in Blockbuster. Early 2000’s. Young, naïve, shaggy long hair, glasses that could barely sit on my face, and staring at a copy of Final Destination 2 that I wanted to watch for the tenth time.

Those days my tastes primarily ran toward the lackluster side of horror. Not because they were lackluster, but I was used to the new age horror with dense storylines and simplistic, overdone tropes: films like Final Destination, Wrong Turn, and Jeepers Creepers. Those were the films everyone my age would talk about. No one I knew had seen films like Halloween, Creepshow, The Exorcist, or even Nightmare On Elm Street. Sure, I had been exposed to a few classics, but they were never my top priority. It was all about what was NOW.

So that one particular trip to Blockbuster back in the early 2000’s, I stood in the horror section, vaguely glancing at films that would one day hold special places in my heart, overlooking them as I sought out that one copy of Final Destination 2. Once I found it, my heart shattered like glass as I grabbed the hollow case and saw that there was nothing behind it. I sighed in frustration, realizing my primary target had already been snatched. At that moment, my father came around the end of the aisle and noticed my hands were empty.

I decided to venture off in search of an absurd comedy. Left alone in the horror aisle, my father found the film that changed my entire view on the horror genre.

The Thing was one of six films we rented that day, and right from the outset it had my attention. I was mesmerized mainly by the box art. Every time I would ask a question about it, my dad would reply “Just wait…” with a sinister smile. His confidence made me chuckle. Once we got home, we settled in, poured some chips into a bowl, cracked open some sodas, and slid the disc into the DVD player. From that moment on, I was hooked.

The Thing opens with a sense of dread. A ship flies through space right on the edge of the earth, until it disappears. As we stare at this static shot, a slow fade in of John Carpenter‘s name appears at the top of the frame. Then, slowly, the title begins ripping its way into the shot with a steady yet aggressive tempo. “The Thing” appears in a chill-blue font against a black background as sounds of thunder rumble in the distance. Next we see a helicopter flying over the cold plains of Antarctica, chasing after a desperate dog. A man leans out of the chopper, firing bullets and trying to kill it. As a viewer we are treated to this vague intro and its menacing score, beautifully composed by Ennio Morricone and fitting Carpenter’s tone like a glove. Before the resolution of the opening scene we are given a glimpse of the lead actor, Kurt Russell, sitting in his private cabin. He pours himself a glass of whiskey and leans back in his chair as he plays chess on his computer. His confidence peaks once he thinks he has the game in the bag, but he ignorantly makes the wrong move and loses against the computer. In a passive-aggressive manner he pours his whiskey onto the monitor and says “Cheating bitch…” After this battle of wits, he comes outside to see the approaching helicopter. Many other men at his station stand outside, confused as to why a helicopter is arriving. The helicopter lands and continues in desperation to kill the dog, but why? The men from the helicopter are killed, and the dog is spared. Now, the plot has been set.

As the film moves along, Russell and the rest of the group begin to investigate the mysterious incident that has left them puzzled. The first act focuses on the investigation and reasoning as to why a Norwegian camp has gone cold. Where is everyone? Why did they try and kill an innocent dog? Most importantly, what did they find out there?

The most interesting aspect of it is how far the characters go toward losing their minds. When something is revealed to be “non-human,” the isolated and testosterone-fueled men approach the ultimate brinks of paranoia and desperation. As they start to die one by one, nobody can trust each other. The guns are kept from everyone and blood tests are given. One of the most frequent questions my dad asks me during films like The Thing is “What would you do in that situation?” Not the kind of question that arises during movies like Final Destination 2.

With The Thing my dad gave me the key to a new, deeper world of horror, and I thank him for that. A sophisticated film that requires thought and attention, The Thing is not the kind of horror flick you and your buds sit around and watch; it’s a film that you watch with your dad.