Academy Award winner Jordan Peele has done it again. After writing and directing Get Out in 2017 and helping produce BlackKklansman in 2018, Peele has more than proven that he is here to stay.

Now before we dive into Us, lets break down Jordan Peele and what he is doing to the horror genre. 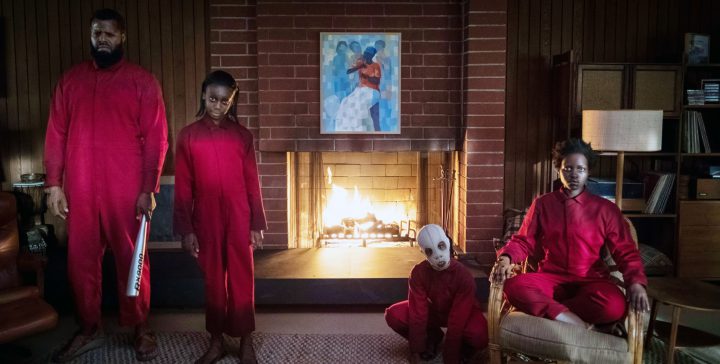 Arguably, mainstream horror has been in a bit of a slump in recent years, drowning in sequels, halfhearted remakes or reboots, and recycled material. Jordan Peele digs deeper to give us horror that is not only scary, but also thought-provoking. It’s that latter impulse that makes his involvement in new Twilight Zone reboot feel less like a reboot.

Us and Get Out aren’t the only horrors to enjoy major critical and commercial success recently, but they are among the best and most meaningful, and the sense that Peele is capable of revolutionizing the genre by exploring new dimensions makes him something like a 21st-century George A. Romero or John Carpenter.

Horror has its slashers, paranormal thrillers, psychological studies, apocalyptic stories, zombie tales, urban legends, alien plots, etc, but Us and Get Out blends so many of the tropes of these subgenres — and add just the right amount of comedy, too — that they feel like they point toward something brand new.

Now lets talk about Us.

Us uses many different tropes and many different emotions. It is constantly throwing you off and making you question what is actually happening and whether it is real or supernatural, or just straight-up fake.

Us is about a family who takes a vacation to Santa Cruz, California. While trying to have a good time, Adelaide (Lupita Nyong’o) begins to feel overly stressed and paranoid due to some childhood trauma which happened at the same place. During their time at the beach, their son Jason (Evan Alex) wanders off, but is found right away. This only elevates Adelaide’s paranoia. Later that night, a new family waits outside their house. Confused and concerned, the original family panics, but are quickly overrun by the new arrivals. The new family are doppelgangers who resembles the original family except for a few deformities. A night of chaos, confusion, and bloodshed ensues. The biggest questions are: Where did they come from? And are they real?

This is where Us begins to bend the rules of horror. It breaks off into many different tangents while the family members face off with each other. We get tension, we get slasher aspects, there is a game of cat and mouse and a battle of wits. The movie elegantly blends things together to maintain a quick pace with lots of scares that will either have you looking away or laughing because you will not know how to react. 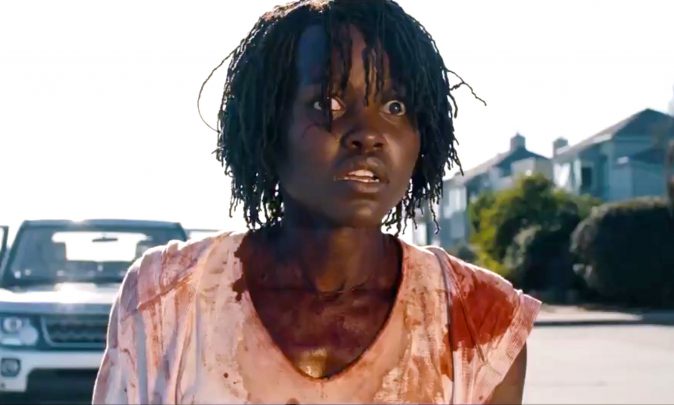 When having a film this chaotic, you’ll need incredible and convincing performances. Jordan Peele hit that nail on the head by casting fellow Academy Award winner Lupita Nyong’o. She plays two different characters in this film, and even though we are still in the beginning of 2019, the Academy should be paying attention to her again. She plays a mother deprived of a childhood, caught in a horrifying situation, and yet willing to bash skulls in for her family. She is also able to play an incredibly unsettling doppelganger who speaks in a menacing tone that croaks up and down and has the edge of a merciless killer. It’s pretty incredible.

Her character Adelaide should become one of the great horror heroine staples. She reminds us of a Laurie Strode or an Ellen Ripley. She is strong, fluid, and easy to connect with her. She is believable and has more tenacity to fight to the bitter end than most horror heroes.

Winston Duke plays her husband and is also great and extremely funny. Also the kids, Shahadi Wright Joseph and Evan Alex, are very talented and will have a great future. 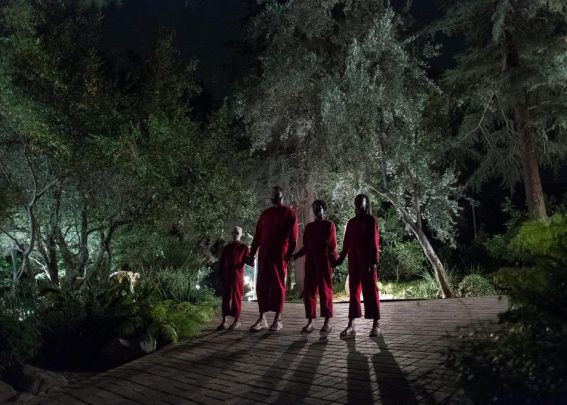 Besides its deranged story and compelling characters, lets talk about some of the other aspects of the film that make it such a delight.

Jordan Peele’s directing has style. There are messages hidden within, and Easter eggs and secrets spread through out. A second viewing will reveal much. There is a “cold open” in which we get vague exposition about the film, and rather than overexplaining the unexplainable it gets us ready to think “What?” and “Huh?”

The opening credits, which come next, feel more like an overture. Us has an incredible score which sometimes feels almost too ridiculous, then turns actually bone-chilling. The music continues throughout the film and is so compelling that it’s almost a character in itself, like the scores of Halloween and Jaws. It too should receive recognition at the next Oscars.

The cinematography and editing are also very impressive. Each shot feels correct, personal, and purposeful. The film has a very good look to it, and certain colors pop, especially red.

It is quite difficult to pinpoint the last horror film that had this much to recommend it, besides Peele’s own Get Out. 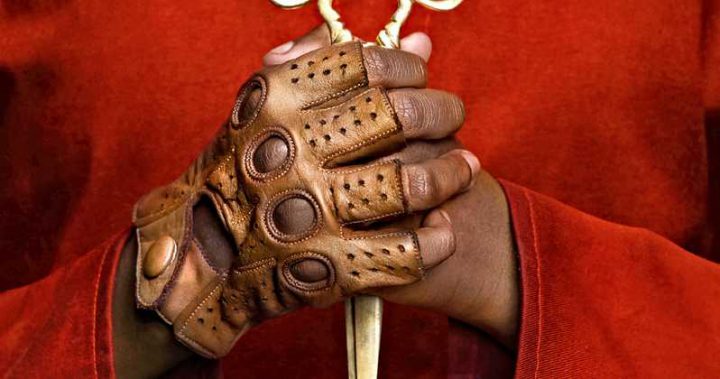 There is so much more to unfold and discuss, but its almost impossible to do so without spoiling this film. It is a movie that needs to be seen on the big screen and with a crowd. It has been a long time since I have been to a theater with a full crowd that was able to get quiet at the right moments.

People know who Jordan Peele is now, and they know he is going to deliver.

Rank Us on Flickchart now!