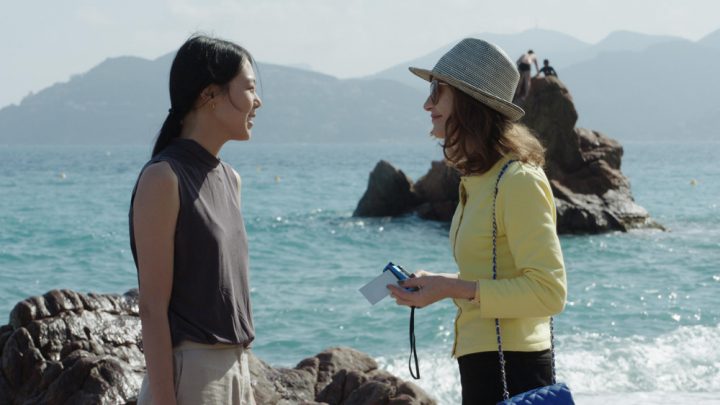 “95% of my mistakes in life were because of alcohol”: a statement that seemingly every lead character of Hong Sang-Soo’s body of work could make, and the viewer would believe them. A highly transparent filmmaker, Hong seems to embody the majority of his leads, either through occupation (as a writer or filmmaker) or through temperament and interests (an abundance of smoking, drinking, and carnal desire). This makes his films feel like hybrids between fiction and documentary in their narrative structures, though their formal aspects place them firmly within the fictional hemisphere.

Claire’s Camera​ places itself very strongly in the late-Hong Sang-Soo timeline: highly minimal presentation (even more scaled-down than the post-Woman on the Beach work of the late 2000s) as well as the highly noticeable, overly sleek display of digital image capturing. Hong often uses a form of “interpersonal obscurities,” which allows the audience to be aware of a relationship dynamic between two or more parties without those involved being aware. The element of interpersonal obscurities is prominent in ​Claire’s Camera​ through the title character, who acts as the glue which holds the entire cast together (who are all familiar with each other in different ways) as she seemingly meets them all by chance, and then organically re-introduces them to each other. Claire (Isabelle Huppert) acts almost as a spectre throughout the film: appearing and disappearing in equal elusiveness, as she unwittingly pulls the strings on the professional and sexual history of Jeon Manhee (Kim Min-hee), Director So (Jung Jin-young), and Nam Yanghye (Chang Mi-hee).

With Hong Sang-soo’s history of narrative manipulation and reconstruction, a viewer can never quite place where within the timeline they are present, until the second or third shift in time or space. ​Claire’s Camera ​provides an early warning of this maneuvering, before quickly abandoning it for a more consistent and grounded arrangement: Manhee speaks with a friend at a cafe at length about being subtly fired from her occupation before appearing at another streetside cafe in the next scene, in which, after a few minutes of small talk, we realize that she is conversing with her boss as a part of the aforementioned firing. The narrative unfolding of the firing process is organic in speed and tone; a pace in which the crux of the meeting is not immediately indicated, though the viewer catches on much quicker than Manhee, allowing for an empathetic emergence of her personality.

The structure and portrayal of content within ​Claire’s Camera​ is very similar in form to the majority of Hong’s previous works, though not explored with equal depth. It is almost a mosaic manifestation of his past films, a mashup of his tricks and trademarks, though not as suggestive or impactful as the best of his works. Often using a pattern- or cycle-based conveyance of subject matter, Hong uses “narrative relapses”: the emergence of previous material returns to be re-examined, in a slightly altered context, with a vastly different outcome. 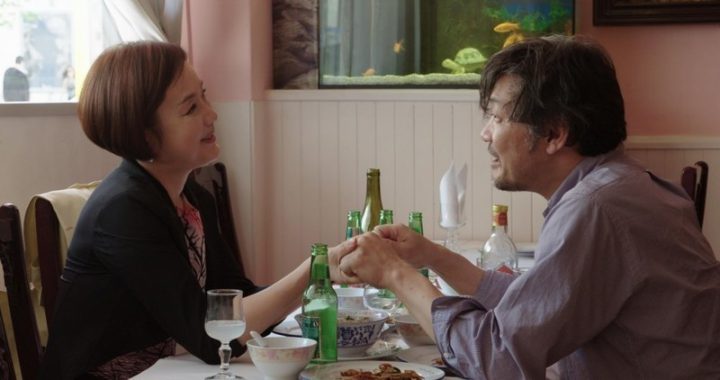 In his 2002 film ​On The Occasion of Remembering The Turning Gate, ​Hong introduces the viewer to narrative relapse in the form of emotional connection: the lead man breaks a young woman’s heart after a one night stand, only for another woman to do the same to him the very next day. Such recycling of material in Claire’s Camera is apparent when cross-referencing the dialogue in both the firing of Manhee at the hands of her boss Yanghye, and Director So’s admitting to Yanghye that they should cease their sexual intimacy to preserve their professional relationship. One could make the observation that the technique of narrative relapse is simply an exercise in duration — filling space for the sake of filling it — though the history and past work of Hong Sang-Soo suggests that there is a larger picture and grand scheme rooted in the very minute details of his characters’ humanity and his empathy for them.

The multilingual nature of ​Claire’s Camera​ is a technique that also helps place itself within the South Korean auteur’s canon, as part of a soft trilogy along with In Another Country and Hill of Freedom. This “series” relies heavily on the English language and a multicultural cast. English tends to be an anchor within these films, acting as a bridge between French/Japanese and Korean, as the characters gravitate toward a neutral language through which they can converse in at least a simplified form. However, the dialogue — at least in its written form as a screenplay — assumes that characters who usually awkwardly bumble their way through simple conversations become far more eloquent and thoughtful through the mediator of the English language. The multi-language format seems to hurt Hong’s characterizations more than help them; if he wishes to make his characters notably eloquent even in their second language, then perhaps he should portray this within the visual arena rather than write multilingual dialogue that is so glaringly inconsistent in its expression.

Though he has created competition even within his own filmography by releasing three films in the same year, ​Claire’s Camera​ establishes itself as a unique study of the blurring of professional and personal relationships and the dangers that come with it, and stands on its own both narratively and visually. Both modes are crafted and shaped in new ways by a filmmaker who has already broken many barriers in his body of work. ​Claire’s Camera​ stands as an intriguing examination of Hong’s distinctive form — with a few “surprises” for those who think they have him all figured out. His interwoven narrative threads, when combined, breathe invigorating life into the peculiar romantic dynamics of his characters, despite the film’s brief runtime.

While short, the product that is ​Claire’s Camera​ is without a doubt sweet, ranking at 166 overall on my Flickchart, with a 4 star rating. Here are its matchups: