Matchup of the Day: The Predator VS Mary Poppins Returns 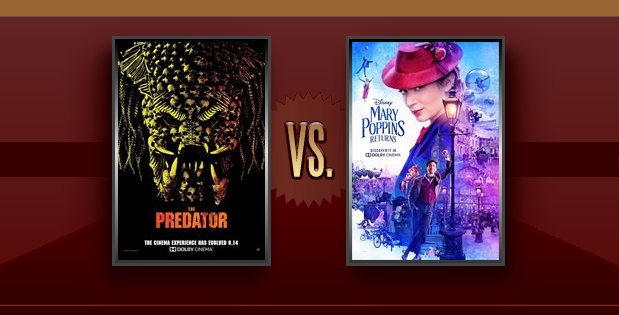 Before I begin the article proper, let’s talk about Tourette Syndrome. According to The Tourette Association of America “Tourette Syndrome is one type of Tic Disorder. Tics are involuntary, repetitive movements and vocalizations.” In more than a few films, Tourette Syndrome has been used as a comedic device, and it’s frequently in the form of  coprolalia. Only 10% of people with Tourette Syndrome actually have coprolalia, or the uncontrollable spouting of profanities, but they seem to get a disproportionate amount of attention on the big screen. So much so that it’s become a cliché. I mention this because in The Predator, one of the characters, Baxley, suffers from coprolalia. This immediately gave me pause as to whether I should continue watching. After witnessing full body Tourette Syndrome in Crank: High Voltage, I’ve been burned out on the supposed value of Tourette as a subject of humor. I did read that the writer/director of The Predator, Shane Black, has Tourette, so maybe that legitimizes his decision to include the syndrome in the film for laughs…? No, probably not.

Both The Predator and Mary Poppins Returns involve a main character who appears from the sky and shakes things up. In the case of The Predator, it’s an alien killing machine made famous in 1986’s Predator (without the The). If you recall the original, Arnold Schwarzenegger’s team of heavily armed military types is picked off one at a time by the creature. Eventually Schwarzenegger is the only person left alive to combat the powerful foe. The Predator is similar in that another creature of the title race lands on Earth and kills a bunch of people, leaving splatter in its wake. This time, though, another bigger and meaner Predator shows up and gives the smaller Predator a fatal beating. Also, the super Predator is on a mission to collect DNA from Earthlings in order to create even deadlier Predators. The team of soldiers (including Baxley from above) that battle the monster this time around suffer from a variety of mental issues. The leader of the group, Quinn, has a young son, Rory, with autism spectrum disorder who is remarkably gifted at electronics. Some of the smaller Predator’s equipment falls into Rory’s possession, and he figures it out with relative ease. The super Predator is impressed with his know-how and wants to add the boy’s DNA to the Predator gene pool.

Mary Poppins Returns has Emily Blunt as Mary Poppins floating back into the lives of the now grown-up Banks children. Michael Banks has three children of his own that he is attempting to raise by himself after the death of his wife. The bank at which he works is threatening to foreclose on his home. In order to keep the house, Michael must find evidence that his father owned shares in the bank. Unfortunately, Michael’s wife took care of the financial matters and he has no idea where to find the proof of ownership. When Mary arrives from the clouds, the frazzled Michael is happy to see her, but no longer believes Poppins took him and his sister on magical adventures when they were young. Mary, undeterred, commences with introducing Michael’s three children to those very same adventures.

Both Poppins and The Predator seek to whisk children off to unknown places. The Predator’s motives are, of course, malicious, while Mary’s are benevolent. Still, in each case the children end up better off than before. The Banks kids are exposed to joy and wonder, and Mary saves their home from foreclosure. Rory is exposed to advanced technology, his understanding of which secures him a job with the government.

Despite my trepidation regarding watching The Predator all the way through, the ample gore and stupidity grew on me. If the Tourette “humor” wasn’t in there I would recommend it far and wide. Mary Poppins Returns could’ve used some of The Predator‘s edginess. After leaving the theater, I couldn’t remember a single song or dance number from it, whereas to this day I still sing the songs from the original film. The Predator is the more exuberant movie despite its vulgar missteps.