Matchup of the Day: Salò, or the 120 Days of Sodom VS Cannibal Holocaust 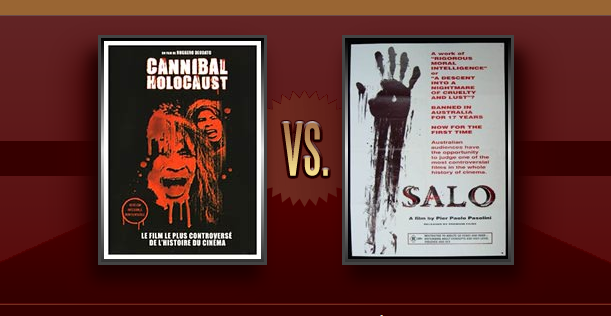 Around 6:30 A.M. on November 2, 1975 the pulverized body of Italian director Pier Paolo Pasolini was discovered by police. Almost five years later, another Italian director, Ruggero Deodato, found himself on trial for supposedly murdering actors during the production of his cannibal film. Famed director Sergio Leone, after seeing Deodato’s film, wrote to him,“Dear Ruggero, what a movie! The second part is a masterpiece of cinematographic realism, but everything seems so real that I think you will get in trouble with all the world.” Pasolini, who was unpopular for his views on Italian politics and culture, initially was thought to have been murdered by a seventeen-year-old male prostitute. The assumed killer has since retracted his confession, leaving suspicions about the real reason for Pasolini’s death. Deodato ended up having to track down the actors the court accused him of killing to prove his innocence.

Deodato and Pasolini are responsible for directing two of the most controversial (and most banned) films ever made.

Today we look at Cannibal Holocaust VS Salò, or the 120 Days of Sodom. 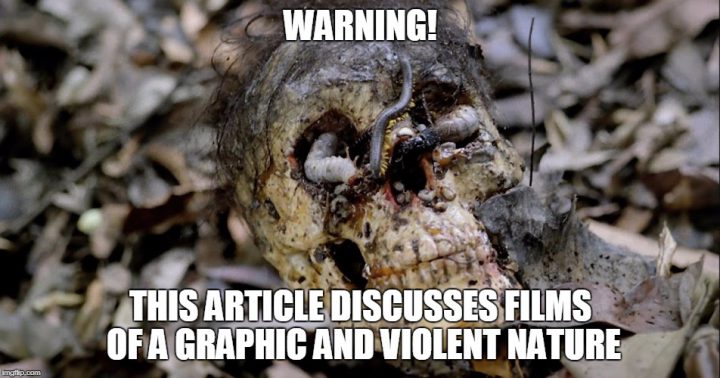 Italian cannibal movies emerged from mondo films (or “shockumentaries”) that depicted all manner of exotic atrocities, many of which were staged. The most famous of the early mondo productions was Mondo Cane. It even managed to receive Oscar nominations for Best Music and Best Original Song. Cannibal Holocaust is Ruggero Deodato’s reaction to the flood of mondo films that followed as well as sensationalist news programs. Not surprisingly, the Umberto Lenzi-directed Cannibal Ferox followed soon after to cash-in on Holocaust‘s notoriety. While featuring gore and sadism on par with Holocaust, Ferox is much more of an exploitation film than it’s predecessor. There is no genuine attempt at social commentary, and the score is recycled from a previous movie. Holocaust is cited as a prescient criticism of the media to this day, as well as the innovator of Found Footage genre. The frequently lauded score came from Riz Ortolani, the same composer who received the nomination for Mondo Cane. Ferox‘s aping of Deodato’s movie only serves to further make his argument, as one character in Holocaust states it,”Today, people want sensationalism. The more you rape their senses, the happier they are.”

Salò, or the 120 Days of Sodom, too, is intended as a cultural criticism. According to this Senses of Cinema article, on one level Salo is an indictment of fascism and capitalism. Director Pasolini actually believed capitalism to be worse than fascism, as it still oppresses people, but through more insidious means. On another level, the film is a criticism of the sexual liberation movement popular among the youth of the time. He believed that the focus on sexual gratification was distracting the populace from practical revolutionary action. The difference between Holocaust and Salo, it seems, is that Deodato’s film is intended to give the audience the most extreme version of sensationalist horror that they could possibly want to see. Salo, conversely, appears to be showing viewers the horrors of what their lives are really like (symbolically, anyway) as opposed to the happy consumerist illusion they exist in. “Bread and circuses,” if you will. Except that the “bread” is human excrement and the “circuses” is a progressively vile display of torture and degradation. That Salo (loosely, thankfully) draws its inspiration from the writings of Marquis de Sade and Dante’s Inferno should give one an idea of the subject matter.

Both Salo and Holocaust have themselves been criticized due to their extreme, unpalatable content. The main issue is whether it’s necessary for a movie to be so offensive in order to make its point. This Guardian article calls Holocaust “artful enough to demand serious critical consideration, yet foul enough to christen you a pervert for even bothering.” This could also be leveled at Salo, which actually is considered an art film. Deodato has said that he regrets making Holocaust the way he did, particularly the actual killing of animals. Pasolini could very well have been murderd because of Salo.

At the end of Salo, the fascist torturers take turns watching their colleagues brutalize young people. They enjoy the show from afar, with binoculars. In this essay, the author writes that Salo predicted reality television. Pasoloni considered TV to be a prime factor in cultural degradation. Salo and Holocaust put the viewer in the position of being both the perpetrator and the victim. As audiences consume more and more exploitative and sensationalist media, the two films discussed in this article suggest that we may no longer be able to tell the roles apart.

Discuss this matchup here or in the comments below

Tags: Cannibal HolocaustSalo Or the 120 Days of Sodom