Matchup of the Day: It Follows VS Jaws 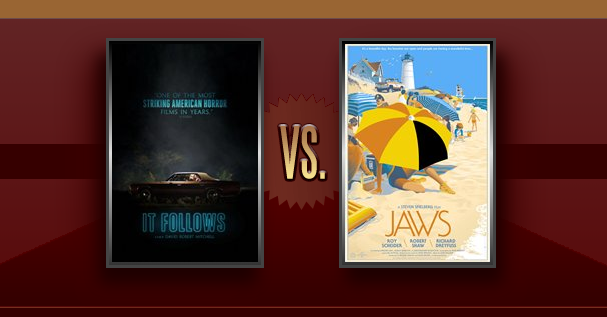 Today we have two movies that were included on the AV Club’s 25 Scariest Opening Scenes list – It Follows VS Jaws. Back when Jaws was released, the public’s lack of knowledge regarding sharks greatly contributed to the film’s scare factor. Shark hunting became popular, which lead to a sharp decrease in the animals’ population. In the case of It Follows, the creature is a malevolent demon that slowly stalks its prey. The threat is far more mysterious and difficult to identity than an aquatic predator.

The openings of both films are similar in that an unseen danger assails a woman. The Great White in Jaws lives in the water, and so viewers would likely deduce that a shark was involved even without knowing the plot. The antagonist in It Follows, however, is not limited to any particular environment. What the girl is running from at the beginning cannot be determined. The viewer is later shown the gruesome aftermath, but not the actual attack. As the film progresses, the creature is revealed to take on numerous forms which usually resemble zombie-like people. The only individual capable of seeing the entity is the intended victim.

The manner in which a person becomes a target of the creature in the respective films is specific. With Jaws, obviously, one has to be in the water. The characters in It Follows summon forth the spirit by having intercourse with the person that it currently pursues. When the predator in both films spots its prey it sets off after the victim relentlessly. On the surface alone, either one of these scenarios is horrifying. Being hunted by a murderous monster is never enjoyable. There are other interpretations of Jaws and It Follows, though, which may or may not add to the level of dread. Jaws, for example, has been seen as a criticism of Watergate and corrupt authority, a Jewish film, and even a serial-killer metaphor. It also represents the emergence of summer blockbuster dominance. Viewers have theorized that It Follows is about STDs, surviving sexual assault, fear of mortality, and millennials trying to escape the mess they inherited from previous generations. 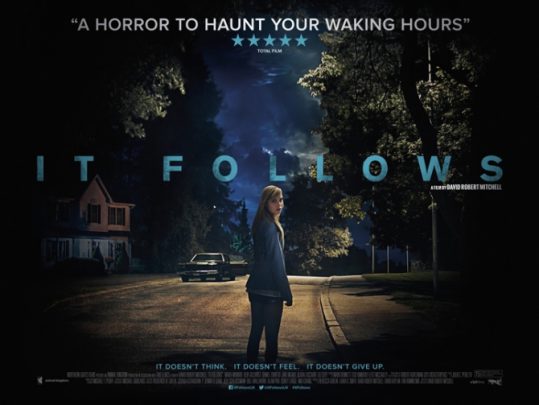 At the end of Jaws, the hero, Martin Brody, blows up the Great White after uttering the memorable line, “Smile, you son of a BITCH!”. The attempt by the protagonists of It Follows to kill the pursuing creature is sort of similar to Jaws (or Jaws 2), though not necessarily successful. The director of It Follows, David Robert Mitchell, acknowledges that their plan is silly in this Vulture article. He doesn’t say either way if they actually did rid themselves of the threat or if  it does still follow. Interestingly, Jaws was influenced by The Thing from Another World and It Follows drew influence from the John Carpenter remake.

Discuss Jaws vs It Follows here or in the comments below!