Matchup of the Day: Eden Lake VS The Hills Have Eyes 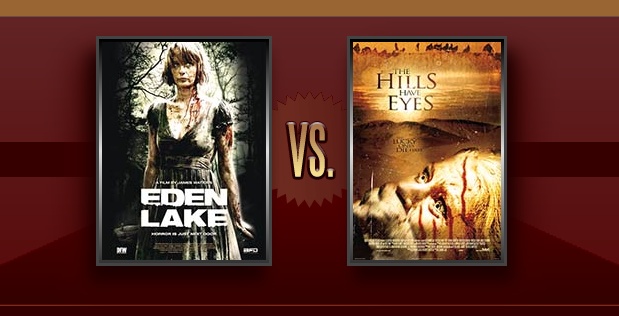 “We look after our own around here.” – Eden Lake

Today it’s “hoodies” vs. cannibalistic mutants in a sadistic horror showdown. “Hoodie” is a term used to describe antisocial youths in Britain who wear hooded sweatshirts and strike fear in the hearts of the middle-class. There is even a sub-genre of film that exploits these fears known as “Hoodie Horror.” Eden Lake is one such film, in which a happy couple encounter teen psychopaths at an idyllic location. Steve (Michael Fassbender) wants to propose to his girlfriend, Jenny (Kelly Reilly), at the lake of the title. The plan goes south very quickly when the couple’s serene vacation is interrupted by some of the most obnoxious teenagers imaginable. At first, the malevolent youngsters blast music while Steve and Kelly try to relax on the lakeshore. The ringleader of the gang also allows his rottweiler to menace Kelly, leading Steve to ineffectually confront the impudent hoodlums. Before long, the criminal kids escalate the situation further by stealing Steve’s SUV. Again, Steve confronts them. A struggle ensues, inadvertently causing the death of the rottweiler. Noise pollution and grand theft auto then graduate to all out brutality.

The cannibals in The Hills Have Eyes remake, all things considered, are only marginally more savage in their cruelty. The victims in Hills are a family that gets stranded out in the desert near a former nuclear testing site. They are given little time to enjoy their barren surroundings before the mutant locals get down to business by setting the father on fire, assaulting the two daughters, and shooting the mother.

Eden Lake’s evil teens also set someone on fire, attempt to set Jenny on fire too, and gruesomely take turns stabbing Steve. One gets the impression that, given more time to mature in their evil, the gang of delinquents could really give the mutants a run for their money. The gang leader, Brett, is the driving force behind the violent acts; the rest of the teens follow mostly due to his intimidation. The mutants, on the other hand, are all quite barbaric aside from a young female mutant, Ruby, who finds the sadism distasteful.

In Lake, a real estate company is building a gated community near the vacation spot. On the back of the sign advertising the community is graffiti reading “F**k Off Yuppy C**ts.” Clearly, outsiders are not particularly welcome. In fact, all the interactions Steve and Jenny have with the locals are less than warm. The mutants in Hills are also unwelcoming. Both films involve fighting for survival in hostile surroundings, but what makes Lake more disturbing is that the monstrous children are also victims of their insular culture. Hills’s mutants are victims of nuclear testing, but that’s not necessarily what makes them violent. They are just intrinsically bad, as only Ruby realizes. Also, at the end of the day, you’re a lot more likely to be assailed by psychopathic teens than cannibalistic mutants.