Matchup of the Day: Don’t Bother to Knock VS Mommie Dearest 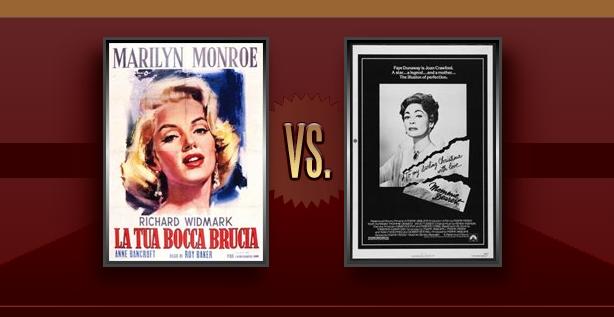 According to the article “The Heartbreak Of Marilyn Monroe’s DON’T BOTHER TO KNOCK“, the actress gives a performance that is “silk on one side and sandpaper on the other.” This has also been said of Monroe herself, who suffered from anxiety and depression. This gave her a reputation of being difficult to work with. Darryl F. Zanuck, 20th Century Fox studio head, said of Monroe, “She’s a dumb tomato and crazy to boot.”  Monroe’s self-medicating to cope with her psychological issues eventually lead to an early death at age thirty-six.

Faye Dunaway, known for being an eccentric diva, also proved difficult to work with. A person present on the set of Mommie Dearest recalled “It was common knowledge that she was a monster on and off set. No one dared approach her for fear of being verbally attacked and abused.” Joan Crawford, whom Dunaway portrays in the film, was a fan, saying “Only Faye Dunaway has the talent, class, and courage to be a real star.” Crawford, however, reportedly showed considerably more poise during her career than Dunaway.

Mommie Dearest, the biopic often hailed as a masterpiece of campy cinema, was intended by its star, Faye Dunaway, to be the “window into a tortured soul” of Joan Crawford. Instead, it turned out to be an embarrassment. From an Out article:

“I think it turned my career in a direction where people would irretrievably have the wrong impression of me―and that’s an awful hard thing to beat,” Dunaway said. “I should have known better, but sometimes you’re vulnerable and you don’t realize what you’re getting into.”

Despite the film being savaged by critics, it developed a dedicated fan base and Dunaway possessed “ferocious intensity” according to critic Vincent Canby. The same Out article from above calls her performance “too good—so much so that Joan Crawford, Faye Dunaway and Faye Dunaway as Joan Crawford are forever conflated in the public imagination.”

Daryl F. Zanuck’s reluctance to cast Monroe in Don’t Bother to Knock, in which she plays a disturbed babysitter, eased up after she pulled off a successful screen test. Like Faye Dunaway, she was a trained method actor, and put considerable effort into her performance. Unlike Dunaway, her acting did not receive quite as much praise. Critic Bosley Crowther said of Monroe’s performance,”all the equipment that Miss Monroe has to handle the job are a childishly blank expression and a provokingly feeble, hollow voice.” Like Mommie Dearest, however, according to Crowther, the audience during its initial release “laughs when it shouldn’t at the film.” Not until two years later, after starring in the successful Gentlemen Prefer Blondes, would Monroe finally be taken seriously as a box office draw. She was found dead nine years later.

Random note of trivia: Don’t Bother to Knock was Anne Bancroft’s first film role. She was later considered for the role of Joan Crawford in Mommie Dearest.