Matchup of the Day: Colette VS Big Eyes 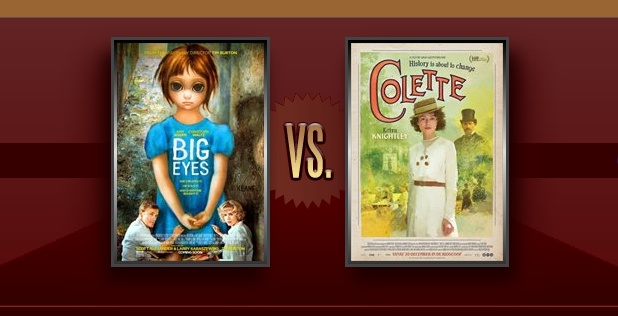 Today we have two films based on true events involving women who married men who stole their art. In Colette, Keira Knightley plays Sidonie-Gabrielle Colette, a French country girl who marries a man fourteen years her senior, Henry Gauthier-Villars. Henry, who goes by “Willy”, is a bon vivant who earns his living paying others to ghostwrite articles and novels under his name. Because Willy is a popular music critic, anything bearing his name is likely to sell well. Due to his extravagant lifestyle, however, he spends money as quickly as he makes it. Desperate for cash, he enlists Colette to write semi-fictional stories based on her life, which he takes sole credit for. When her first novel, Claudine at School, is a massive success, Willy milks it for all it’s worth. He and Colette become the toast of the town.

Big Eyes tells the story of Margaret Keane (Amy Adams), an artist who leaves her “suffocating” husband for a better life. She relocates to San Francisco with her daughter, where she meets Walter Keane (Christoph Waltz), a real estate agent and amateur painter. Walter praises her unique “Big Eyes” artwork and eventually convinces her to marry him. He can’t find any buyers for his or Margaret’s work until he talks a nightclub owner into displaying their paintings. Walter gets into an altercation with the owner of the club, which draws publicity. Margaret’s paintings are the only work anyone’s interested in, though, so Walter pretends he painted them. Like Willy in Colette, Walter is a good self-promoter and merchandises Margaret’s paintings to the hilt. Also, like Willy, he feels no emotional connection to his wife’s work, treating it only as a commodity.

According to the real Margaret Keane, she would spend sixteen hours a day painting when the “Big Eyes” became famous. In Colette, Willy locks his wife in a room for four hours at a time when she doesn’t produce work fast enough. All the while, both Walter and Willy enjoy the fruits of their wives’ labor. They continue to justify their deception by claiming that art by women doesn’t sell. This is proven wrong by the end of each film. Even after Willy sells the copyright to Colette’s novels for a paltry sum, she continues to write and is successful on her own. Margaret proves in court that Walter took credit for her paintings and goes on to a successful career as well.