Matchup of the Day: Bronson VS Nightcrawler

In a recent article in The Telegraph Charles Salvador (born Michael Gordon Peterson), the infamous British prisoner upon whom the film Bronson is based, said he would like actor Tom Hardy to father his child. Salvador became notorious for his violent attacks on fellow inmates and prison staff. He also holds six world records. During the short period when he wasn’t incarcerated, he worked as a bare knuckle boxer (which was when he went by the name Charles Bronson, after the actor) and fought a Rottweiler. Salvador came to admire Tom Hardy, who portrayed him in the 2008 biopic. Unable to impregnate his fiancée, actress Paula Williamson, Salvador thought Hardy would be worthy of the honor.

The film barely scratches the surface of all the things that the real-life Bronson has done. The more I read about him, the less crazy Tom Hardy’s portrayal actually seems. Bronson, not surprisingly, takes place almost entirely behind bars. It covers a couple of the hostage-taking incidents (out of about a dozen) he was involved in, as well as repeated brawls with guards. Hardy explains in the film that Bronson enjoyed being in prison because it allowed him the opportunity to hone his craft. His enthusiasm for beating on people cannot be understated. He desires to be famous, though mostly his aggressive behavior gets him confined to solitary or sent to mental hospitals.

Jake Gyllenhaal’s character Louis Bloom in Nightcrawler possesses considerably more focus and savvy in regards to his career path. Though certainly deficient in the area of empathy, Bloom is ambitious. At the opening of the film he earns his living stealing whatever he can get his hands on. He’s not above physical violence, though he is more discreet than Bronson. His preferred approach is manipulation. So, when he comes across a freelance camera crew filming an auto accident, his interest is piqued. Bloom takes up filming disasters and human suffering, which he sells to a local news station. His willingness to engage in unethical activities increases with the demand for sensationalist news coverage. 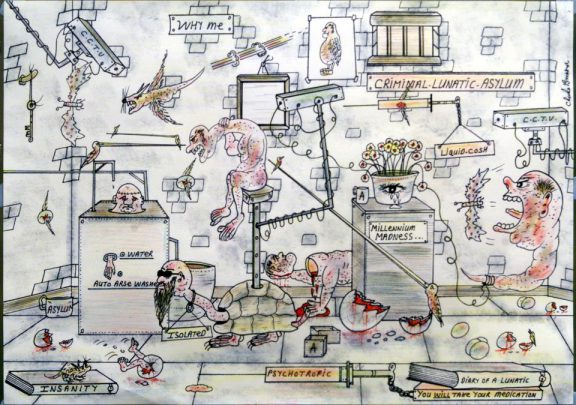 Toward the end of the film, Bronson takes up art therapy. The real Bronson changed his last name to Salvador as a homage to his favorite artist, Salvador Dali. He even held an exhibit of his work. The film Bronson only benefits from his artistic pursuits briefly before falling back into attacking prison guards. Like Louis Bloom in Nightcrawler, who discovers that the news business is his true love, Charles Salvador found a more lucrative means of expressing himself. He has even donated some of his artwork to charity.

Discuss Nightcrawler vs Bronson here or in the comments below