Matchup of the Day: 8MM VS Dead Man 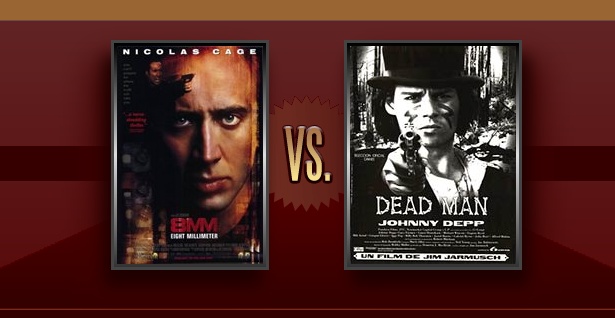 Years ago, I was watching the mystery thriller 8MM, in which Nicolas Cage plays surveillance expert Tom Welles. He is hired to determine the origin of an apparent snuff film. During the investigation, he pays an adult video store clerk, Max (Joaquin Phoenix), to navigate him through the world of extreme porn. Eventually they are lead to the main villain of the film, Dino Velvet, who Max describes as “a producer-slash-director-slash weirdo. He’s like the Jim Jarmusch of S&M.” Being a modest fan of filmmaker Jim Jarmusch, and not particularly a fan of Joel Schumacher who directed 8MM, I took offense to the characterization. What’s worse is that Velvet’s murderous henchman goes by the moniker “Machine.” Why is this an issue? Well, in Jarmusch’s film Dead Man, Johnny Depp‘s character, William Blake, travels to the Old West industrial town of Machine. Coincidence? Maybe, but also during 8MM, Welles is required to go to Cleveland, Ohio. Blake is from Cleveland in Dead Man!

Wait, let’s back up. Maybe those are just superficial similarities. On a deeper level, it could be said that both films are about a man on a journey in which he is over his head. In the case of Dead Man, Blake sets out west for an accounting job. When he arrives in Machine, he is told that the position has already been filled. He later meets a woman and spends the night with her, after which her fiance walks in on the pair. Shots are fired, leaving Blake with a chest wound. The woman’s fiance kills her and Blake kills him. Soon afterward, Blake finds himself being pursued by three hired guns. A worldly, philosophical Native American named Nobody finds Blake and guides him on a spiritual quest. On the way, Blake kills multiple individuals, garnering a reputation. Throughout the journey it is implied that Blake is already dead, and the film ends with him drifting off in a canoe to the spiritual realm. Welles, too, goes on a quest to find a missing girl who appears to be murdered in a snuff film. His guide is the aforementioned Max, who knows a great deal about the underground porn scene in Hollywood. Welles digs deeper and deeper into depravity until he meets Velvet and “Machine.” He discovers that the missing girl was actually murdered. Though he takes revenge against the perpetrators, he is left with no satisfying answers as to why human beings would do something so despicable. The film ends with him reading a letter from the girl’s mother thanking him for solving the crime.

It would appear that Welles has the more hopeful ending of the two, even though he is emotionally devastated by his ordeal. Blake is dead, or at least dying. Then again, Blake actually seems to grow in a more positive manner than Welles, and maybe the afterlife holds something pleasant for him.