Cats by Andrew Lloyd Webber, the fourth longest running show in Broadway history, opened in the West End in 1981 and Broadway in 1982. Of all the Webber musicals, this is one that people seem to either love or hate with a vengeance. I fall into the “I almost wore out my VHS copy I love it so much” category. Although I’ve never been to Broadway, I have seen two touring productions, one so close to the stage you could get spit on. Every young actors dream, right?

With the recent news that director Tom Hooper will be helming a film adaptation of Cats, my mind began to obsessively ponder who could fill out the rest of the partially-announced cast. The ever-brilliant Jennifer Hudson (who already has one Academy Award for the musical Dreamgirls) will be playing Grizabella, the aged-glamour cat. I’m already choked up at the thought of hearing “Memory” escape her perfect pipes. Sir Ian McKellen, James Corden, and (sigh) Taylor Swift have also been announced. I’m 99% certain McKellen will be playing Gus the old theatre cat, and Corden will be filling Bustopher Jones’s tubby tuxedo shoes. Swift is more of a mystery. She has the tall, thin body required for Victoria, but not the ballet chops. I see her more in a smaller role, the kitten Jemima, who sees the good in Grizabella. Her part calls for some singing, positive energy, and more movement than dance.

Cats has a huge cast, but here I’m speculating about who could fill the rest of the main roles. With musical adaptations there’s always a conundrum: do you cast an film actor who can kind of sing, or do you cast someone with theater chops but is largely unknown to moviegoers? I won’t even consider the lip-syncing that still continues to happen (looking at you, Greatest Showman) because there is zero excuse for it. After a refresh viewing of Cats and much deliberation, I present to you the following proposed cat-cast: 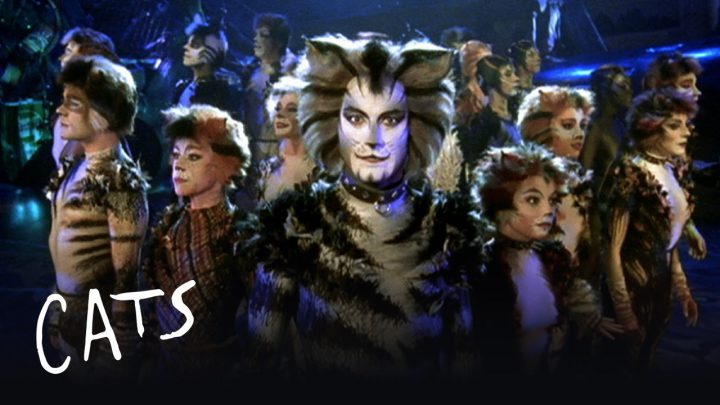 Victoria – Misty Copeland. Victoria is a dance-only ballerina cat, and Copeland is arguably the most well-known prima ballerina today. In 2015, she became the first African-American woman to be promoted to that role in the American Ballet Theatre’s 75 year history. She previously starred on Broadway in On the Town.

Munkustrap – Aaron Tveit. Munkustrap is the charming narrator of sorts, and Tveit is a full-fledged Broadway heartthrob. His notable performances on Broadway include Next to Normal and Catch Me if You Can, and he is currently starring as Christian in Moulin Rouge. In film/TV he has starred in Les Mis, Grease Live!, Graceland, and BrainDead.

Jennyanydots – Bernadette Peters. Jenny is an older cat who puts mice to work in a flashy tap-dance number. Peters is Tony Award-winning royalty starring in Sunday in the Park with George, Into the Woods, Annie Get Your Gun, and most recently Hello, Dolly!. She also has a long film and TV career with The Jerk, Annie, Pennies From Heaven, and Mozart in the Jungle. And she’s a Golden Globe winner.

Rum Tum Tugger – Brendan Urie. Urie, the lead singer for Panic! At The Disco, is the absolute perfect person to play Tugger, the rock and roll showman flirt. He has the range, the stage presence, and the charisma needed. He also had a brief stint on Broadway in Kinky Boots.

Demeter – Lady Gaga. Now hear me out! Demeter and Bombalurina (next) are both sultry cats who need a powerful range with a belt. She killed The Sound of Music medley she performed and is a multiple Grammy Award winner — as well as a Golden Globe winner for her performance on the Hotel season of American Horror Story. I look forward to seeing her acting chops in the forthcoming remake of A Star is Born. (Bradley Cooper can’t be that wrong…) Admittedly I am a Little Monster through and through, but I promise you she’d nail this.

Bombalurina – Jasmine Cephas-Jones. Cephas-Jones burst onto the scene as Peggy/Maria in the original Broadway cast of Hamilton. She has done some minor TV and film acting, but I have a feeling we’ll be seeing much more of her once the film Blindspotting premiers. Take one listen to her sing “Say No to This” from Hamilton and you’ll hear why she’s perfect for the sultry duo.

Jellylorum – Bette Midler. Another aging cat, Jellylorum watches out for the other cats and has lovely solo pieces with Gus, as well as trios with Demeter and Bombalurina. I went back and forth with who should play which older cat, and Peters won Jennyanydots because I feel she has a better tap dancing background. I think Midler has the perfect sass and sweetness to sing the two different styles of vocals required for Jellylorum. Midler is also an Oscar, BAFTA, Emmy, and Golden Globe-nominated actress with a long, long history, most notably The Rose, Beaches, Hocus Pocus, Gypsy, and The First Wives Club. She recently completed a Tony Award winning performance on Broadway as the title role in Hello, Dolly!.

Mungojerrie – Andrew Rannells. Mungojerrie is part of another duo, joined with Rumpleteazer. They are acrobatic cat burglars with a sense of humor, and this is my favorite song in the show. Rannells has quickly made a name for himself on Broadway with two Tony nominations for the hysterical Book of Mormon and Falsettos. He has also performed in Hairspray, Hamilton, Jersey Boys, Hedwig and the Angry Inch, and currently is in the all-star cast play The Boys in the Band. While he only has had minor roles in film, he was a main character on Girls, and had a hysterical role in the cartoon Big Mouth. 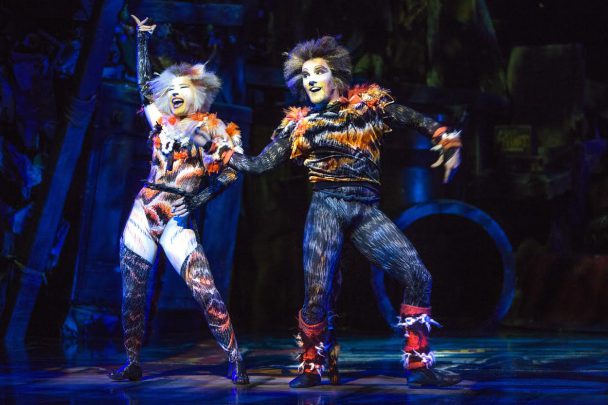 Rumpleteazer – Sutton Foster. Foster is a six-time nominee and two-time Tony Award winner for Thoroughly Modern Millie and Anything Goes, and has also starred in Young Frankenstein, Little Women, The Drowsy Chaperone, and Shrek the Musical. She can also dance her ever-loving ass off. Foster has appeared in a few films, most notably the weird horror film Gravy, but has done well on TV on the shows Flight of the Conchords, Bunheads, and Younger.

Old Deuteronomy – Billy Porter. Old Deuteronomy is the wise older cat with a beautiful baritone voice. Porter is a Tony Award-winner for his role in Kinky Boots, but has also starred in Miss Saigon, Grease, Smokey Joe’s Cafe, Little Shop of Horrors, and Shuffle Along. His film and television credits are small, but he is a joy in The Broken Hearts Club: A Romantic Comedy, and is sure to be nominated for everything following his role in Pose on FX.

Growltiger – Hugh Jackman. Yes, I know, another Jackman musical. I tried to avoid it. Depending on how Hooper adapts it, Growltiger and Griddlebones may not even be in the film. The two are part of Gus the Theatre Cat’s memories. The vocals for both parts are both more operatic, and with his performances in Les Mis, Oklahoma, The Greatest Showman, and his Tony Award-winning part in The Boy From Oz, he has proven — like it or not — that he has the vocal chops for Growltiger. We all know the billions of films he’s made, so let’s move on.

Griddlebones – Audra McDonald. An operatic soprano to pair with our buddy Growltiger above, absolutely nobody can sing Griddlebones better than eight-time Tony Award nominee and SIX TIME WINNER Audra McDonald. She is the only actress in Tony history to have won both a Lead and Featured Tony in both musical and play categories, let alone two of the categories more than once. If that doesn’t prove her goddess status, she also worked in film and television in Beauty and the Beast, Annie, A Raisin in the Sun, The Sound of Music Live!, Lady Day at Emerson’s Bar and Grill, and was a main cast member on Private Practice.

Skimbleshanks – Jonathan Groff. Sigh. Skimbleshanks is probably my least favorite cat, and I have no good reason why. He’s a little silly cat that follows a conductor around a train — high energy, more of a tenor. Although I don’t love Skimble, I do love Groff. Groff has absolutely blown up the past few years thanks to his role on Glee, but before Glee he was making waves on Broadway as a Tony nominated actor in Spring Awakening. He continued to Hair and Pirates of Penzance before shooting to the stratosphere as King George in Hamilton, gaining another Tony nomination. Post-Glee he’s worked on Boss, Looking, the excellent Mindhunter on Netflix, as well as a little known film called Frozen. 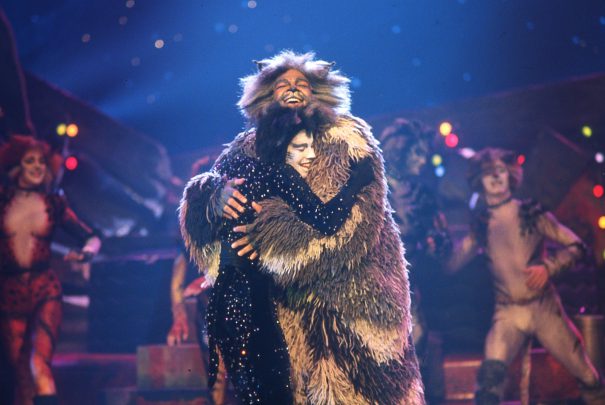 Mister Mistoffelees – Ben Platt. Mister Mistoffelees is a young magician, and who better to portray him than Platt, who portrayed a magician in the Pitch Perfect films? Platt may come off as a nerd in those movies, but he is a Broadway golden child with a voice to be reckoned with. He most recently won a Tony for his performance in Dear Evan Hansen, and has performed around the country since he was a child in The Music Man, Caroline, or Change, and The Book of Mormon, which I was lucky enough to catch in Chicago where his voice blew me away.

There’s your cast, Tom Hooper! As for Macavity/Rumpus/others who are mainly dancers and chorus, I’m not particularly worried about those. Cats fans, what do you think — is this a good enough mix of stage talent and film bonafides? If you’ve got other suggestions, I’m all for dreaming big!

Have another purrfect cast member in mind for the CATS remake? Share in the comments!

Becky is a movie lover of all things horror and musical. She has a Bachelor's degree in Vocal Performance, a Master's in Special Education, and is working on a Graduate Certificate in ESL when she is not teaching the best kids in the world. In her spare time she freelance vocal directs musicals for local universities, obsesses over Mel Brooks, and has full blown music discography discussions with her dog Luka.