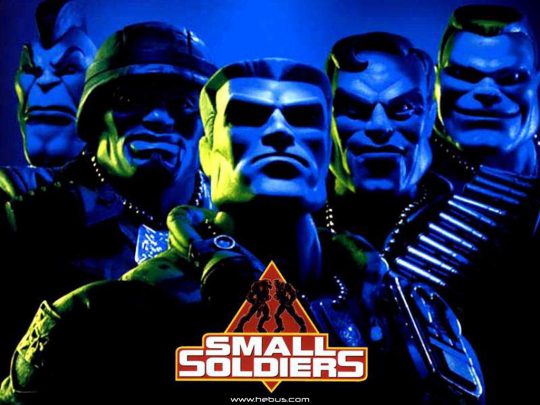 In the summer of 1998, I was taken to the movies for my first theatrical experience. That film was Small Soldiers.

I recall resting my Major Chip Hazard action figure in the cup holder and my parents sitting on opposite sides of me, but not much else about the experience. Yet the film had such an effect on me that I acquired almost all of the action figures, the board game, coloring books, clothes, and even the video game.

Small Soldiers is the Gremlins of the 1990s. The lead actor in both films is a hormonal teen who works a boring job and has a crush on a girl who’s way out of his league. They both find themselves owning a pet/toy, in Small Soldiers‘ case an action figure, that has more personality and intuition than any normal pet or toy. Soon, chaos is unleashed. The scores for both films were composed by Jerry Goldsmith. Both movies feature Dick Miller. None of this is coincidental, of course: both movies were directed by Joe Dante and produced by Amblin Entertainment, Steven Spielberg’s production company. 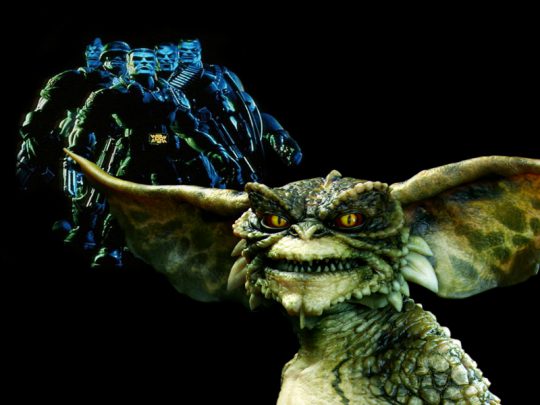 Small Soldiers opens with two high strung toy executives who have to impress the new boss, who also happens to be involved in distributing missiles and weapons to the military. Irwin, played by David Cross, presents a line of monster toys complete with a whole monster universe rich with whimsy, interesting names, and backstories. Gil, the new boss, is not impressed, and stops him after hearing him say that kids could “learn” more about the characters and their world. Then Larry, played by Jay Mohr, begins his presentation with confidence: he reveals a prototype figure and a commercial for a new line of military toys. Like Irwin’s toys, Larry’s have depth. But while watching the commercial, Gil is impressed simply by the action. He begins to rant about how much he hates advertising, which gives Larry the motivation to try something bold and original.

Larry’s Small Soldiers go into production. They are built of plastic and munitions microchips that make them artificially intelligent and capable of learning.

Enter Gregory Smith‘s character Alan, by far the film’s weakest element both in the performance and on the page. Unfortunately he is also its main character. Alan had “acted out” at school — everything from graffiti to bomb threats — which resulted in his being expelled. He claims to his love interest, Kirsten Dunst, that he is now a completely different person, but he’s still rude to everyone else in the film. Furthermore, Dunst’s character already has a boyfriend, and he seems like a pretty decent guy (despite the “bad boy” trappings of piercings and a motorcycle), so there’s no real reason to root for the protagonist to get the girl.

Other than the main character, though, the movie is solid gold. Tommy Lee Jones and Phil Hartman are outstanding. Jones’ voice work gives Major Chip Hazard an intimidating personality, bringing him so much to life that you can’t see the action figure without thinking about Tommy Lee Jones. Hartman is hilarious as Dunst’s father, a tech nerd who never seems to be satisfied with anything. His dialogue is so intricate and silly, and so well delivered in Hartman’s memorably arch tone, that you can’t help but laugh.

I think the most charming aspect of the film is its scope. The Gorgonites, the fanciful monsters created by Irwin who also eventually come to life, are the good guys. Each creature in the group has a distinct personality and look. Archer is the leader, Slam-Fist is big, heartfelt, and dense, Insaniac is wild, humorous, and a loose cannon… they’ve all got weapons or fighting skills, but all they want to do is get home to Gorgon.

Meanwhile, the objective of Larry’s Commando Elite is to hunt down the Gorgonites and annihilate them. Each commando, too, is different and each is equipped with different roles and personalities. Major Chip Hazard is the leader, stern and ruthless and persistent. Butch Meathook is the sniper, Brick Bazooka the powerhouse idiot. Then there’s Nick Nitro, the pyro/explosive member of the group and the only one to have a “real” “death” scene. Later Nitro’s microchip is used to bring a bunch of Barbie dolls to life, which are then used as pawns in the battle. 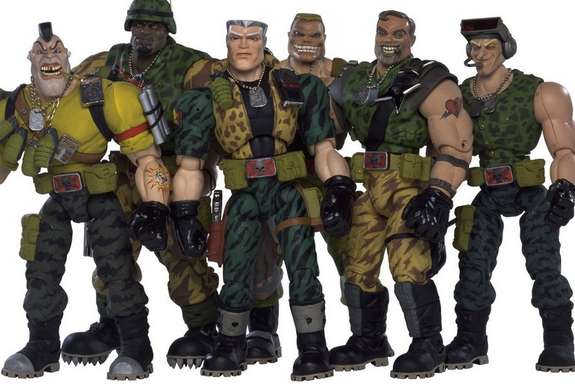 The skirmish in the final act is a total blast, literally. Chip Hazard survives, and he finds himself near a local toy store where he recruits a large shipment of additional commando action figures to continue the fight against not only the Gorgonites but humans as well. The humans even try to surrender, and this action is where the film gets really creative. At one point the commandos assemble a convoy of vehicles built from skateboards, RC cars, chainsaws, and old lawnmower parts. They shoot fire, Roman candles, nails, and even corn holders at their targets. They also use one of Phil Hartman’s stereos to blast the song “Wannabe” by the Spice Girls as “psychological warfare.” A scene where the commandos desperately push towards a house under heavy bombardment resembles D-Day.

Small Soldiers is not something worthy of detailed study in film school or a film that will be held in high esteem decades from now, but as an explosive, creative, and brilliantly farcical movie, it taps into the essence of entertainment. It is a Guilty Pleasure.

What was your first war movie? Let us know in the comments below!