From Book to Screen: Pet Sematary 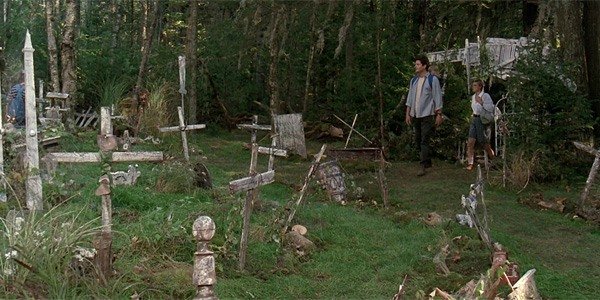 Welcome back to the Stephen King Book-to-Screen Series. Last time, we covered that ol’ Plymouth Fury Christine. We’re skipping no books this time as, for the first time in a while, we feature a novel with more than one adaptation. It’s one of King’s most well-known and beloved works, Pet Sematary! 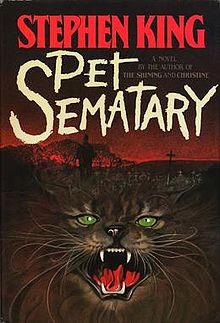 In 1983, the same year that King published one of his more critically-lambasted works (Christine), he also published one of his most well-regarded. The inspiration for this novel came from King’s own life when he was a writer-in-residence at the University of Maine. He moved to a rural house near the university that shared a feature with the home in the novel — a highway running past it. The road claimed many pets’ lives, just like the road in the novel, and there was a Pet Sematary nearby, reportedly with the same wrong spelling.

King’s own daughter lost a cat to the road, and he had to explain the nature of death to her because of that experience. That helped spark the novel as King began to imagine what would happen if the cat came back “fundamentally wrong.” King’s son also flew a kite near the road and nearly got run over, and his mind also drifted to what could have happened.

This was a novel that King himself was reluctant to release. He considers it the most terrifying he’s ever written and he was very hesitant about anyone else reading it. He turned away from it to work on Christine, a book he enjoyed writing much more, but he couldn’t help but turn back to Pet Sematary and eventually publish it. The decision was partly a legal obligation, as King was ending his relationship with his current publisher but owed them one more book. King still comments that he felt he may have gone too far with this story. Despite that, or maybe because of it, the book has been one of his biggest sellers over the years.

Pet Sematary is a very dark work and easily among King’s most nihilistic pieces of writing. There isn’t much hope to be found in its rumination on the eventuality of death and the ways we cope with it. One of the most famous lines from the book, “Sometimes, dead is better” has become its calling card partially due to the delivery and repetition of the line in the first film. It is a chilling acceptance of one of our most elemental fears. 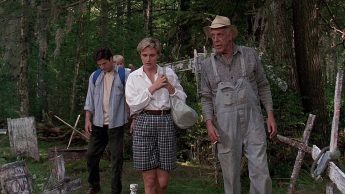 The whole debate that runs through the novel is how we handle death. The main character, Louis Creed, is a doctor who tries to approach the world in a rational manner and explain death to his children. His wife has different ideas about death and is haunted by the childhood trauma of her sister dying while under her care. King manages to work the nuances of this debate into all of the character relationships, from Louis’s underlying conflict with his in-laws to the wise, hermit-like Jud Crandall and his interactions with the Creed family.

King’s writing is in fantastic form in Pet Sematary. His folksy descriptions of the Maine countryside are as evocative as ever, and his ability to create a mounting sense of dread is showcased well. It’s a difficult novel to keep reading as the last half sees misery after misery pile up with no end in sight. But unlike Apt Pupil, this book’s nihilism actually goes somewhere. While King may have regretted releasing it, it is a unique sort of literary gem that we would be worse off for not having. 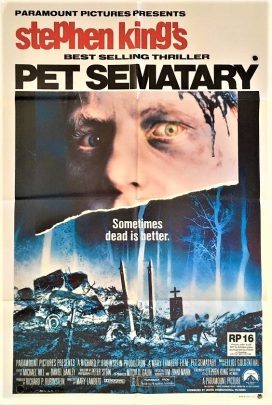 The film rights were originally sold back in the early 80s during the first King film adaptation gold rush when Dino de Laurentiis was adapting every single story from Night Shift. (We already covered that). George Romero initially sought to adapt Pet Sematary, but he soon shelved the project. A development executive, however, loved the script that had been written and kept trying to get it made. By the mid-80s, studios had decided the King rush was over, but when the 1988 Writer’s Guild Strike began, Paramount suddenly became desperate for a film. They green-lit Pet Sematary and away they went.

King was given the final decision on who should direct, and director Mary Lambert earned the job by impressing King with her enthusiasm and knowledge of his work. Production occurred in Maine, also thanks to King’s stipulation. King was very involved with this production and consulted with Lambert on the story and possible deviations. He even has a cameo in the movie, and other Maine locals appear as extras.

Pet Sematary released in April 1989 and was a surprising box office smash. It earned $57.5 million on a budget of $11 million. Critical reviews were mixed, with many criticizing the dark ending as vacuous hack-and-slash. But that didn’t matter to general audiences. Perhaps the casting of Fred Gwynne (best known as Herman Munster) helped.

Certainly, Lambert’s work is unique. It’s a mostly faithful adaptation, but it has some interesting quirks and directing choices. This can translate to schlock, such as when a poor special effect of a man’s face screaming occurs during Louis’s trek to the iconic Pet Sematary. Gwynne’s delivery of the line “Sometimes dead is better,” which is said 5-6 times in succession, is a little goofy. Dale Midkiff’s acting as Louis is certainly nothing special. 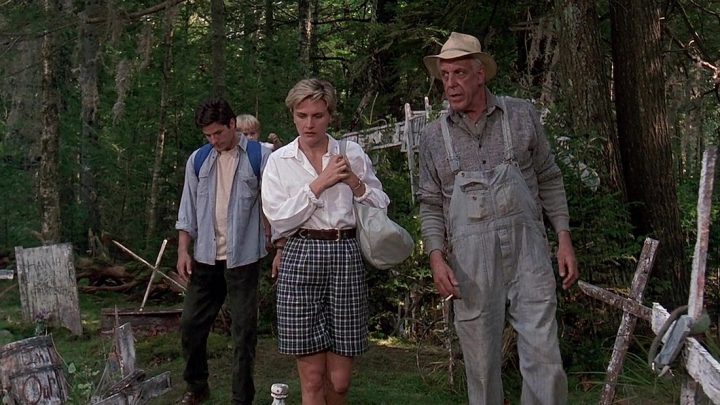 Still, Lambert’s work does manage to pull off some chills. Mike Hughes is genuinely very cute and innocent as the young Gage, and his turn during the ending of the film is quite creepy. There is some solid gore throughout as well. The slashing of a certain character’s face is a seat-clenching moment, even to the experienced horror fan. Lambert’s direction nails the shocks without getting bland.

This isn’t a perfect adaptation, as it struggles to reach the novel’s nihilistic depths. Tonally, it feels like a slasher film rather than a truly toxic, dark piece of fiction. Some of the character development between Louis and his wife Rachel (played decently by Denise Crosby) is cut down, and the in-laws are almost entirely removed from the story. This holds the film back from tapping into the story’s greater thematic elements. But Pet Sematary is a distinct adaptation, and the Maine locations and input from King lend it authenticity. 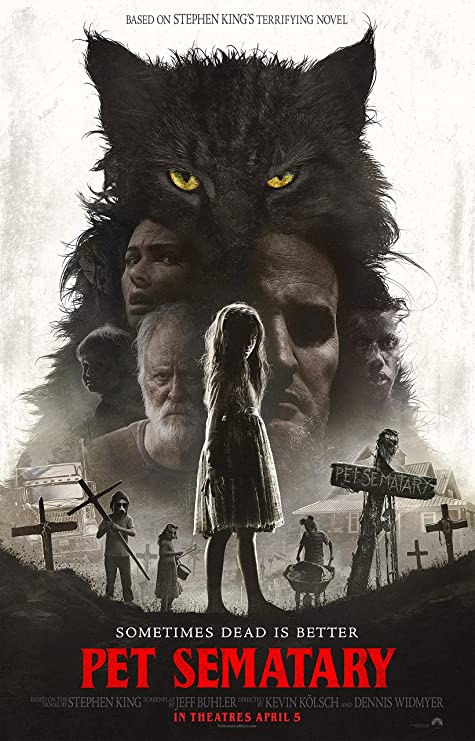 Development on a new adaptation of the novel started in 2010, and Matt Greenberg (writer on 1408 and Halloween: H20) was commissioned to write a script. His draft would eventually be re-written enough that he later was only given a story credit. The project languished for many years, but by 2017 director Andy Muschietti, fresh from his take on It, indicated an interest in directing. Yet in October 2017, Paramount announced that directors Kevin Kölsch and Dennis Widmyer would direct the film; at that point, they were best known for Starry Eyes.

Casting and initial production occurred in early 2018, and filming occurred between June and August 2018. The film debuted at South by Southwest in March 2019 (which Flickchart covered) before releasing in April of the same year. The film went on to gross $113.1 million on a budget of $21 million, once again proving that the property was bounteous. However, critical reception was even more mixed this time around. Several major story changes were made, but they were spoiled in the film’s trailers, which took away from the shock. Critics pointed out the over-reliance on jump scares and other modern horror tactics. Some, though, claimed that it was better than the 1989 version.

Indeed, sometimes dead is better. Flickchart declared as such in our review last year, and this re-examination a year later has changed little. It’s a disappointing movie, especially since the acclaimed indie horror directors showed such style with Starry Eyes. Pet Sematary has little of that style, opting instead for overused horror tropes like creepy kids in masks, predictable jump-scares, and muddy color grading. 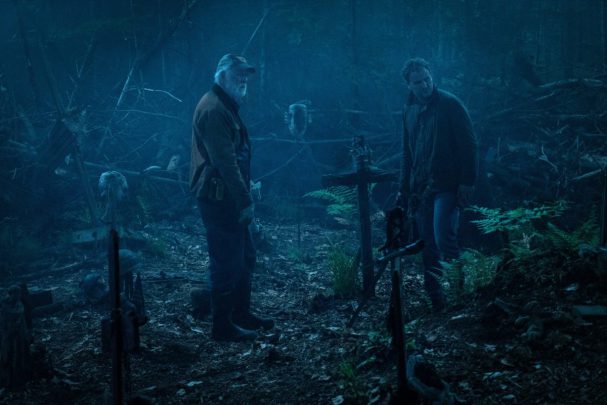 There are some positive choices. The trailers ruined it, but the scene in which the kids run toward the highway is well set-up to play with audience expectations. And while Jason Clarke is a bland lead, his reaction at seeing his child die is genuinely heart-breaking. There’s also an effort to be more faithful to the novel, as in the use of a Maine Coon as the cat Church, the inclusion of more character conflicts, and references to the Wendigo and shapes in the dark heading towards the titular location.

But ultimately this is an effort that lacks individuality and fails to tap into the thematic elements that make King’s novel so creepy and affecting. An effort is made to stick to those themes, the impulse toward standard horror fare is stronger. A new ending is even more nihilistic than the novel’s, but the dramatic weight isn’t there to support it.

The Best and Most Faithful 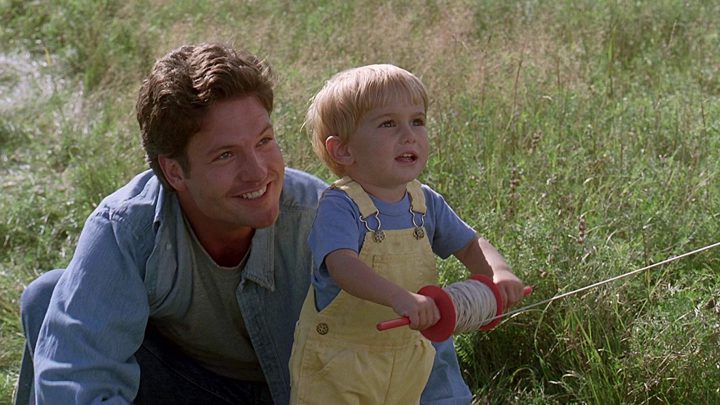 Selecting a more faithful adaptation here is a difficult choice. On the one hand, more of the novel made it into the 2019 version. It taps into King’s themes a little more, and it largely follows the pacing and story direction of the book, and includes additional small details. But it also makes several changes to the plot, albeit in an effort to do something slightly different than the earlier version. The ’89 version has the benefit of filming in Maine and more closely covering all of the major plot beats. Both versions are pretty faithful on the whole, but the ’89 version must be considered more faithful, even if it leaves out more.

The ’89 version must also be considered the better adaptation. The 2019 adaptation does have some effective scares here and there, and tries to bring to life the subtle influence of the “sematary” itself, an undercurrent left out of the ’89 version. The flatness of the some of the direction in the ’19 version leaves it lacking character, even though it is darker than the ’89 movie. Lambert’s adaptation, quirks and all, is a better-made work, and its truly effective gore scenes are great examples of the horror filmmaking of its day. Fred Gwynne’s force of personality makes Jud a memorable character, and the little kid is very creepy at the end. 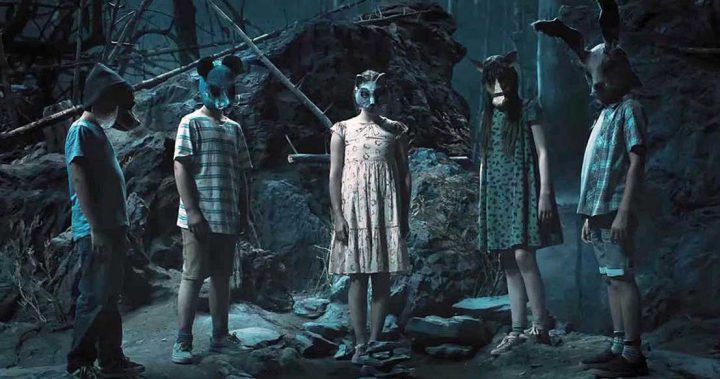 Despite two attempts, Pet Sematary still lacks a definitive adaptation. Neither film has managed to bring in the true darkness and nihilism of the King novel and its reckoning with the weight of death. As one of King’s best works, it certainly deserves an all-time great adaptation. Perhaps someday it will get one.

Horror fans should find plenty to enjoy in either version, but the ’89 version is a fan favorite and worth checking out. The 80s were a unique time for horror, and Lambert’s film certainly reflects that, goofiness and all. The 2019 version is too bland to recommend to anyone, really, though you could do worse when it comes to bad King adaptations, as we’ve seen in this series.

Tell us your thoughts on Pet Sematary below and rank all Stephen King films on Flickchart!