From Book to Screen: Firestarter 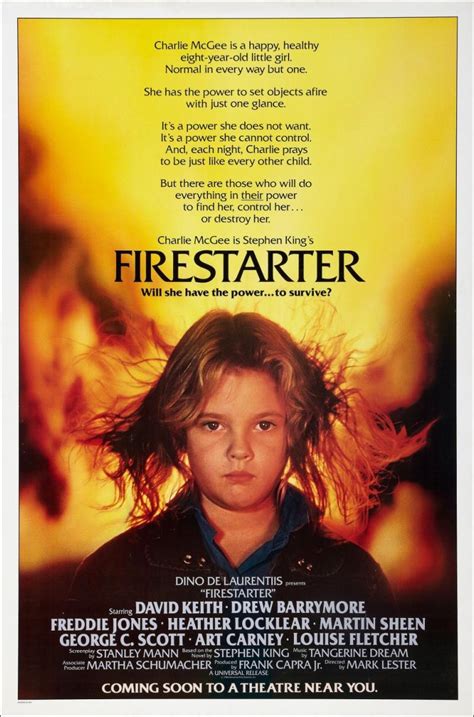 By 1980, Stephen King was a smash success. With multiple best-selling novels and proven success at the cinema thanks to Brian de Palma‘s Carrie, King was the leading name in horror. Stanley Kubrick then directed his acclaimed The Shining, and though that film actually opened to lukewarm reviews, it was clear that even established masters of cinema would now be clamoring to bring King’s properties to the screen. It was into this atmosphere that King let loose his next spate of novels, many of which received movie treatments fairly quickly. The 80s could be described as the Golden Age of King in terms of critical success, popularity, and number of films. He began living in a massive mansion in Bangor, Maine.

The next novel covered in our Stephen King Book to Screen series continues King’s string of books that deemphasize the horror elements. There are certainly horrific elements that show King’s firm grasp of the macabre, but there are no demons or monsters; like The Dead Zone, this book is more often considered science fiction than horror, and focuses on humans with paranormal abilities. The film version (which had a TV miniseries sequel in 2012) has attained a certain level of exposure, enough that people recognize the title fairly well. Join me as I hold this adaptation to the fire — as my bad pun indicates, we’re talking Firestarter. 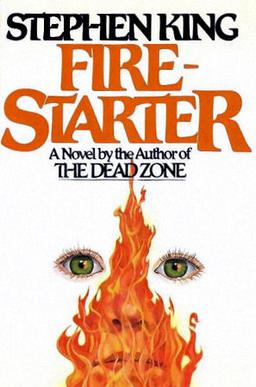 Firestarter published in September 1980. The novel was previewed with excerpts published in Omni magazine leading up to the release of the book. Whether it was these previews or King’s massive popularity, Firestarter did well. Selling over 280,000 copies, Firestarter also managed to do well with critics, picking up nominations for the British Fantasy Award, Locus Poll Award, and Balrog Award. King was backed by a new publisher, New American Library, which appreciated King’s genre work. King had had a notorious falling out with his first publisher, Doubleday, who seemed to regard him as an embarrassment despite being one of their best-selling authors.

It’s fitting that Firestarter reduces King’s earlier horror hallmarks. King sees himself as a thriller writer with horror just one motif among many. Many of his novels fall more into the science fiction realm, and Firestarter may best epitomize that turn, being the least horror-driven of any of his supernatural books. The novel also showcases King’s political shift, as he became more and more left-leaning, writing about vast governmental conspiracies with power-crazed right-wing politicians acting as the main antagonists. Firestarter follows a couple who meet in college after both agree to the same experiment that gives them supernatural abilities. The LSD-like symptoms King describes during the couple’s testing evokes the drug culture of the 60s. The couple falls in love and has a child who exhibits a new power of her own: pyrokinesis.

They are soon chased down by a government apparatus known as The Shop. King references this body several times throughout his work, adding to the idea of a shared universe. This novel is a fitting follow-up to The Dead Zone as King continues to explore psychic powers. It’s odd that he doesn’t include more references to the “shine” from his earlier work, as that concept threaded together The Shining and The Stand. Both of those novels featured human characters with psychic-like abilities as well.

Ultimately, though, Firestarter plays out like a road-trip novel with the father and daughter on the run from The Shop. There’s an entire theme of the daughter having a sexual awakening that is clear throughout the writing. Her relationship with one of their captors nearly revels in its Freudian subtext. One only has to think of how fire is used as a metaphor in Pleasantville to get the idea. While Firestarter doesn’t stand with the strongest of King’s work, it is entertaining, and reading King describe the carnage caused by the girl is powerful and visceral. The acceptance of female sexuality as Charlie learns to wield her powers without shame is certainly progressive as well. And, like always, King’s writing flows, and Firestarter is a breeze to read… unlike the film. 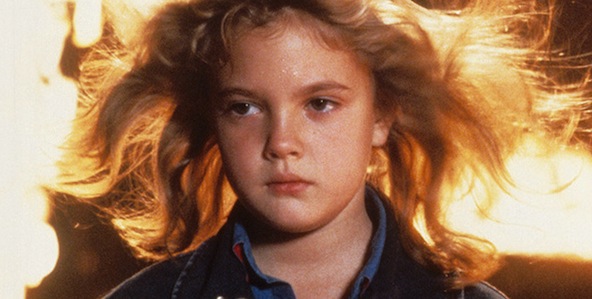 In speaking about this film, King described it as “flavorless; it’s like cafeteria mashed potatoes.” An apt description. Universal Pictures distributed the film, and it was yet another produced by Dino de Laurentiis’s company, though he didn’t serve as a producer on it. With Dino producing so many of King’s films, you’d think he’d want to capitalize on the shared universe potential of so many of King’s books; both this film and The Lawnmower Man feature The Shop as the primary antagonist. But in the 1980s, shared universes were still a thing of the future. Universal offered the directing job to John Carpenter, who had just done Christine for Columbia Pictures the previous year and was in the middle of filming The Thing.

As some may be aware, The Thing was a bit of financial disappointment for Universal, and they decided to kick Carpenter out the door to make room for Mark L. Lester. Lester seems an odd choice compared to Carpenter, as his previous film, Class of 1984, had been banned in many countries for its lewd content. Not exactly the path to box office success, but trying to understand the decisions of movie studios can be a futile endeavor.

With a new director on board, the studio trashed the previous King-approved script written by Bill Lancaster, who also wrote The Thing. Regular readers of this series will have noticed a running theme of new scripts replacing earlier ones approved by King. Stanley Mann would ultimately write Firestarter‘s script. Though hardly a bomb in its May 1984 debut, it only earned a box office of $17 million on a budget of $10 million, and was critically maligned upon release.

The main issues with the film, which Roger Ebert called out 1984, are bad performances and bad dialogue. David Keith plays the lead Andy with line delivery that is barely a step above trashy B-cinema. Despite being a native Tennessean, he managed to make his natural accent sound fake. Consider that marvelous feat as we move onto Drew Barrymore, who delivers most of her lines like she has no clue what she’s saying (which, at age 9, she probably didn’t.) It’s a miracle she got to star in the following year’s Cat’s Eye (covered earlier in this series).

Our antagonist’s performances are better, though, as Martin Sheen does a fine job of playing the power-hungry government agent who leads The Shop. It’s fitting that he would play the power hungry politician Greg Stillson in the next King adaptation, The Dead Zone, which was just reviewed by this series.  He’s joined by the great George C. Scott, who plays Stillbird, a death-obsessed special agent who pretends to befriend Barrymore’s Charlie. Scott looks far older than I imagined the character in the book, but the infinitely talented actor does a good enough job.

The film screams 80s with a synth heavy score from Tangerine Dream that’s easily the best part of the film, though whether it fits the tone of the movie is a different matter altogether. The problems are compounded by Lester’s rather flat and uninteresting direction. The wielding of the fire powers feels tame and never reaches the explosions of fury and power that the book describes. The sequence showing the parents receiving their powers from the drug testing also feels uninspired. In the novel, it plays out as the pair being high and yet overcome by the surreal horror of realizing their fellow test subjects are all dying from the tests. Yet here Lester makes it feel cheap and silly. David Keith’s psychic powers also play as cheap, though he does a decent enough job conveying the pain it causes him to use them. His parallels with the protagonist of The Dead Zone aren’t hard to spot. Pyrokinesis, of course, also has its own parallel in the first novel covered in the series, Carrie. 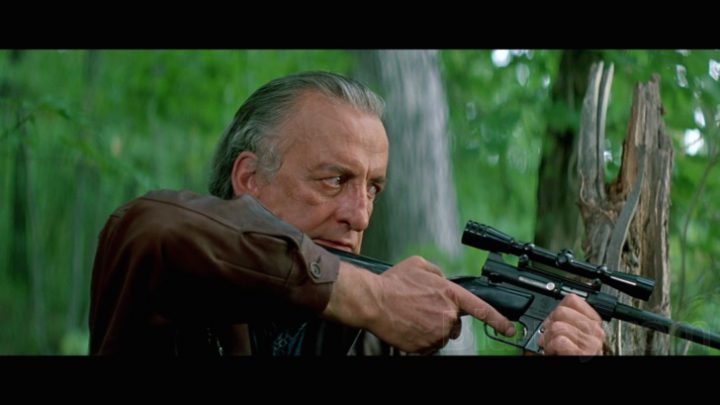 Despite being fairly universally derided, I didn’t find Firestarter quite as terrible as some. While the acting isn’t great from our main characters and the direction is fairly lifeless, it’s not an incompetent mess like some of the other adaptations we’ve covered. It tells the story fairly straightforward and sticks to the structure of the book well. It does feel more rushed and choppy than the book and doesn’t convey the atmosphere that the book does, probably because Lester failed to develop an atmosphere of any kind. Firestarter‘s blandness is arguably a worse sin than the entertaining awfulness of something like Graveyard Shift, but at least I could watch Firestarter all the way through, even if it felt like being in a stupor at times. I wouldn’t recommend it to general audiences as there isn’t much here, but King fans could probably get a kick out of Sheen and Barrymore both starring in their first King films before they each went on to be in better ones. Firestarter is one of those King works that’s tailor-made for a good remake by a director ready to tackle the themes in an artful way.

Tell us what you think of Firestarter in the comments below!