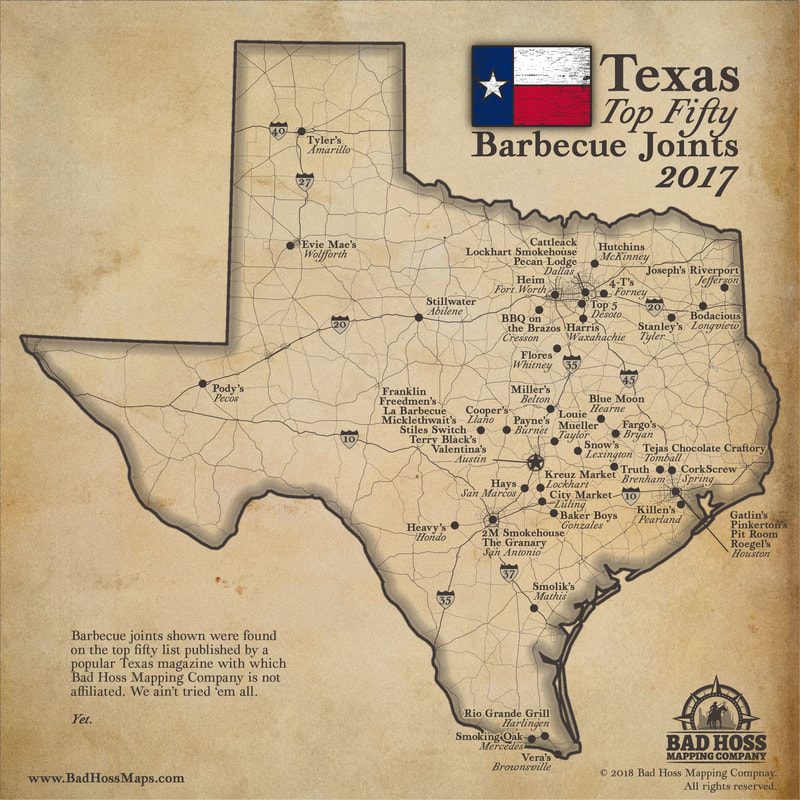 Back in 2013 Flickchart took a virtual road trip across America, “visiting” a film that took place in each state of the United States. In 2020 Flickchart hops back on the road, but for real this time! It’s a Texas two-step: movies and BBQ all over the great state of Texas.

If there is one food that Texas is known for, it’s barbecue. To a Texan, the mere mention of BBQ evokes roadside shacks with luscious waves of smoke filling the air. We are in the midst of a BBQ golden age, as fans of smoked meats have turned it into prestige cuisine over the last decade. BBQ was once considered a cheap food for peasants, but now pit masters order the finest meats and hone their craft to create the perfect bite.

I sit here at the first destination on my Flickchart Road Trip, surrounded by the succulent BBQ smoke smell in the air. Every five years, Texas Monthly publishes a list of the top 50 BBQ joints in the state. I am going to visit every single one of them in 2020 — or try to, anyway! Sadly, a few of them have closed since the most recent list was published in 2017, so mine will be a slightly truncated quest.

In addition, I will celebrate each BBQ joint location through cinema. We have found almost 50 movies that take place in Texas, and each corresponds to a town or region that is home to a top BBQ joint. Admittedly there are a few stretches, but at the very least each film captures some part of the character of a given town or city. Each entry will rank both the BBQ and the films against each other. At the end, we will compare the lists to see which Texas town can boast the epitome of both cinema and BBQ excellence. So buckle your seat belts, roll out your smokers, crank your projectors, and get ready for Flickchart’s 2020 odyssey around the Lone Star State! 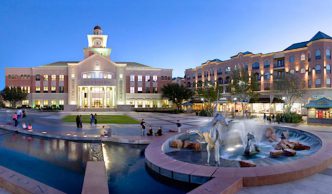 Our trek across Texas begins in her biggest city: Houston. Named after Sam Houston, the Republic of Texas’s first president and later a U.S. Senator from the state, Houston is home to an estimated 2.3 million people. It is the fourth most populous city in the United States and a bustling urban metropolis, so it defies many stereotypes about what Texas is like. The city is well-known for its burgeoning rap scene as well as being the hometown of pop/R&B superstar Beyonce. Four entries on the list of best BBQ joints sit in Houston proper, and there are several others in surrounding suburbs.

We’ll focus here on an area on the west side of downtown, close to Sugar Land, the Houston suburb that is host to our first film. One of the wealthiest and fastest-growing suburbs of Houston, Sugar Land’s population increased by 158% between 1990 and 2000. To Houstonians, Sugar Land represents wealth and prestige as the entire west side of the city continues to grow and grow. The economic boom supports a solid restaurant scene, and part of that scene is The Pit Room. The Pit Room opened in 2016, nestled just north of Houston’s museum district. It proudly displays its Texan and Mexican heritage through its menu. Homemade chicharrónes and tortillas can be found right next to the meat selections. The tortillas are made using drippings from their brisket, adding a fantastic smoky flavor. Pitmasters Michael Sambrooks and Bramwell Tripp use the finest cuts of U.S.D.A. prime beef and Berkshire-Duroc-breed heritage pork from California. Dedicated to making everything from scratch, they even have their own custom-made smokers.

I tried two selections of meat: their brisket and their venison sausage, seasoned with black-pepper and garlic. Rookies to Texas BBQ must learn that brisket is a defining part of Texas’s holy trinity of BBQ, alongside sausage and beef ribs. Their brisket was nice and moist, with a confident dark bark and palatable seasoning. While a slightly more defined smoke ring might have been desired, the flavor was still top notch. The venison sausage, meanwhile, has that nice, gamey taste that fans of deer meat enjoy. The garlic and pepper seasoning helped give it a distinct flavor. My sides were a classic mac & cheese and a mustard-based potato salad. One doesn’t usually visit BBQ spots for the sides, but well-made sides complement and round out a meal. The Mac & cheese was nice and cheesy, but the potato salad was a little lacking in flavor. 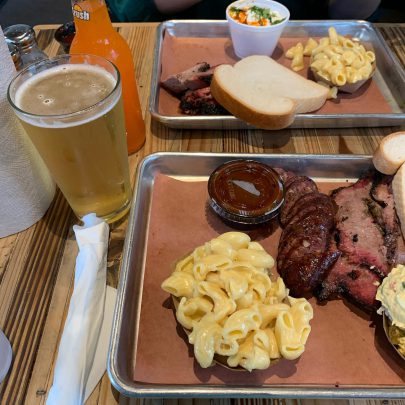 I award The Pit Room’s brisket 4 slices out of 5 and the venison sausage 4.5 links out of 5. On the whole, The Pit Room receives 4.5 smokers out of 5!

The Film: The Sugarland Express

Our first film visit in Texas is 1974’s The Sugarland Express. Notable for being Steven Spielberg‘s theatrical feature debut, this crime movie partially takes place in Sugar Land and was also partially filmed there. Other scenes were filmed throughout Texas at San Antonio, Live Oak, Floresville, and Del Rio, among other places. Sugar Land’s proximity to the western part of Houston makes it a prime pairing for The Pit Room.

The Sugarland Express stars Goldie Hawn and William Atherton as a husband and wife whose child has been taken away from them by the state of Texas due to their mild criminal record. Determined to get their child back at any cost, Hawn’s character breaks her husband out of jail and they take a Texas State Trooper hostage as they travel from east Texas to Sugar Land where their child lives with foster parents. Texas accents abound, and the geography of the film is front and center. The landscapes in the early parts of the film look like East Texas, and there is even an interlude where Louisiana State Troopers cross the border to assist in the capture of the vaguely Bonnie-and-Clyde-esque protagonists. 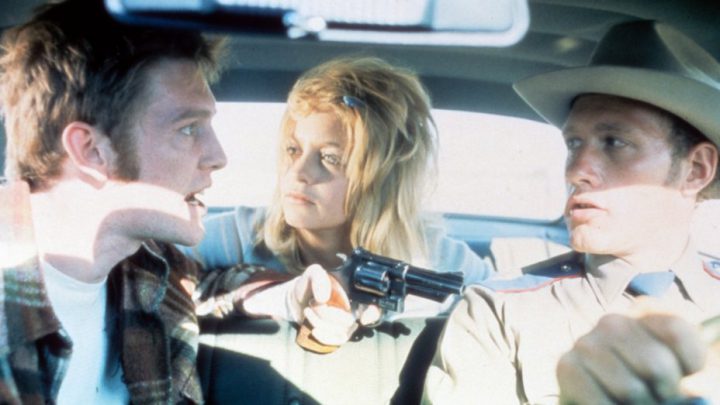 Texas congeniality is also on display. The nature of the couple’s mission makes it clear that they aren’t hard-core criminals, and as news of their exploits spreads, people begin to celebrate them. Even the cops treat them with a somewhat friendly attitude, especially considering that their fellow officer as a hostage. The police cruisers display the Texas State Police logo that you can still find on the vehicles today.

The film itself is an underseen gem from Spielberg. Many rightfully criticize latter-day Spielberg as overly sentimental and overwrought, and while The Sugarland Express has plenty of sentiment, it’s well-balanced with grimness of an increasingly dark character. The movie starts off fairly lighthearted, with friendly banter between the husband, the wife, and their hostage cop (played well by Michael Sacks). Yet the script weaves in a sense of melancholy as the story progresses and the protagonists realize that the success of their mission is far from certain. Clovis, the husband, realizes this and begins to question his role and purpose, and the film doesn’t hold back from giving that drama real weight.

Sugarland Express is also excellently filmed. The film makes a great use of close-up shots, keeping them dynamic and interesting. A closing shot featuring two characters silhouetted against a crystal clear lake in the sunset feels perfectly Texan and is a striking, emotional image. Spielberg, Verna Fields, and Edward M. Abroms do a fantastic job editing the film, keeping a firm sense of the pacing of the almost comical  low-speed chase.

The Sugarland Express is based on a true event, and it’s certainly fitting that a chase like this would occur in Texas. In other words, this film highlights both good cinema and the Texas spirit. And the town of Sugar Land looks exactly right, with a gorgeous wrap-around porch home that suggests the Sugar Land character well.

No! There is no BBQ consumed in the movie, but they do stop for McDonald’s.

The first stop of our odyssey is done. Join us again next time for more delicious smoked meats and fantastic Lone Star cinema!