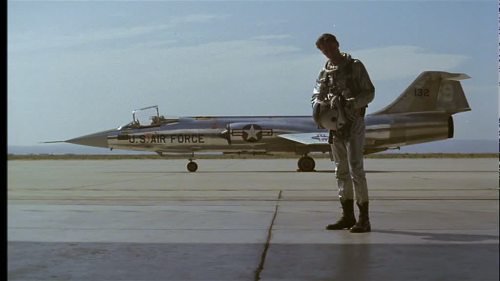 We’re back on the road in Texas as Flickchart continues its trip across the Lone Star state eating the greatest BBQ and watching the best Texas movies! This time we head to north Houston in search of some of the best beef ribs in the state, and we recall some of Houston’s finest hours. 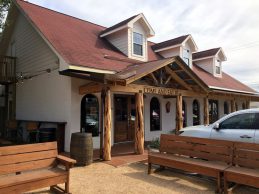 Like any area in Texas, North Houston means different things to different people.  It could mean the Woodlands, a rich suburb fairly north of the actual city. Others may mean the hipster stretches along one of the main highways. But the North Houston we’re referring to is a small neighborhood, or really several distinct neighborhoods, such as Greater Heights and Woodland Heights. Just off the interstate, it has a city-block feel to it. It’s not spread out enough to be considered a suburb, but it’s distinct from the character of downtown Houston. There are plenty of residential areas and shopping centers sandwiched between the large roads leading off to Austin, Dallas, and elsewhere. Many of these areas had been low-income neighborhoods before gentrification, but now money has moved in and many new businesses have too.

Pinkerton’s Barbecue is there, and it retains a backyard BBQ feel. Indeed, Grant Pinkerton set up the restaurant in his actual backyard. The placed used to be his house, and he still lives upstairs above the restaurant. Deciding to jump in on the growing BBQ craze, he opened up shop in 2017 and has been smoking meats since. 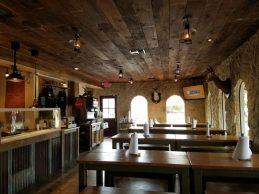 Like many in the BBQ boom, Pinkerton uses the best-quality meats to make his BBQ. Prime beef from Swift’s 1855 line forms the base for his work. Unlike several of the places we’ll visit on this journey, Pinkerton’s has avoided horrendously long lines, at least during the weekday lunch rush, making it a tad more accessible than many other top-rated BBQ joints. Pinkerton’s also uses some unusual smoking techniques, starting off over a strong mesquite wood before finishing up with a more typical mild post oak.

I came at opening time and was among the first in line. I ordered a giant beef rib, a candied pork rib, and some brisket. The beef rib is among the more unique parts of Texas BBQ. They come in two varieties, and the one featured here is what is known as a dinosaur rib. These come from the big rib cage of the cow and are smoked to attain a fantastic flavor. Unlike brisket, beef ribs have an even fattier and thicker taste, making them a beast to conquer and eat. Pinkerton’s beef rib was the best one I’ve tried. The bark on the rib was full of fantastic flavor and spicing. The inside of the rib was also rich and flavorful without being overwhelmingly fatty like some beef ribs. The candied pork rib was good as well, though not a stand-out. The brisket was also smoked well, with a unique flavor that wasn’t as strong as some brisket I’ve had. I enjoyed a side of potato salad, a fantastic mustard and mayo mix, and some jalapeno cheesy rice.

The Film: The Right Stuff 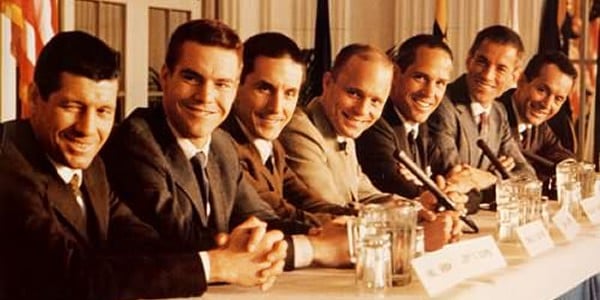 While using The Right Stuff somewhat skirts our location rules, with the majority of the film taking place in California, there is a portion that takes place in Houston that makes this film a prime choice for this entry. The majority of the film chronicles the earliest era of America’s space program, following a group of test pilots at Edwards Air Force Base in California. The structure of The Right Stuff is striking, opening with a cast of characters that are largely abandoned after 30 minutes or so. Yet this structure does well to highlight the search for “the right stuff”.

Directed by Philip Kaufman, a director with a diverse career to say the least, Kaufman delivers a visually fantastic and moving drama on the perils faced in breaking human barriers and striving for more. The ensemble cast is fantastic, utilizing the talents of a variety of actors that were having or would go on to have fantastic careers. Dennis Quaid, Fred Ward, Ed Harris, Scott Glenn, Sam Shepard, Lance Henriksen, Veronica Cartwright, and more all fill out the ranks of the pilots and their families. In a note of personal pride, Chuck Yeager, a native West Virginian (my family is from West Virginia), plays a significant role in the film. With such a large ensemble, it can be hard to get caught up in all of the characters and in the overall point of the film. But Kaufman deftly manages the characters with a screenplay and direction that helps make them distinct enough while still keeping the great themes of humanity’s overall strive for excellence alive.

There are a multitude of great shots in the movie. The image of Russians in the flickering flames of their rocket launch helps emphasize the political stakes of the space race. A clandestine meeting in the White House is shot in shadow, and the sight of President Eisenhower leaning forward out of the gloom also emphasizes the importance of the task. 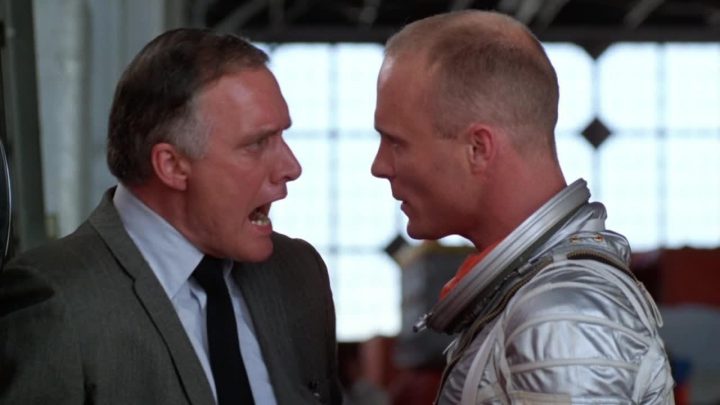 When the film finally reaches Houston, it’s a celebration of the accomplishments of the heroes who have endured test after test to break into space. It’s an interesting glimpse of Houston as it once was and sometimes still is, with much flash and glamour and over-the-top, stereotypical Texanness. Giant Texan and American flags are unfurled, businessman sport cowboy hats and bolo ties, and great rodeo exhibitions are seen. It’s a sign of change as the space program moves to Houston and the Houston scene helps embody the ideals encapsulated by the pilots’ renegade nature. Kaufman criticizes this renegade attitude, yet also celebrates its role in the nation’s reach for the stars… and beyond.

Yes! At the big Houston celebration scene, we see a number of people chowing down on some Texas BBQ!