Welcome back to the Flickchart Texas BBQ Film Road Trip! We’re heading on down the highway this time to the only BBQ spot in a certain major Texas city on this list. There’s a little event that occurred there that many Texans take great pride in. If you’ve read the article title, you know we’re heading to San Antonio and the Alamo! 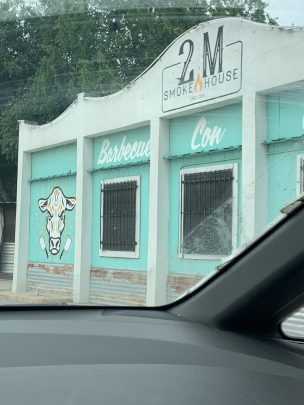 Despite not feeling like a huge city on first look, San Antonio is the seventh-most populous city in the United States and second-biggest in Texas. Initially founded as a Spanish mission back in 1718, it became the first chartered settlement in Texas in 1731 and has been around through nearly all six of the Six Flags over Texas. It celebrated 300 years back in 2018, making it a cornerstone of Texas culture.

Named after Saint Anthony, San Antonio was initially a collection of missions, including the famed Alamo. It was a hub of Spanish colonization and later of the Mexican colony of Tejas. After being at the center of several historical events of some note during the Texas Revolution, San Antonio played a major role in Texas’s cattle industry.

Modern San Antonio is still a big deal. Home to multiple military bases, theme parks, and a gorgeous River Walk, San Antonio continues to thrive and prosper. It’s no surprise that it also has some great BBQ.

2M Smokehouse is located in the eastern part of San Antonio away from downtown. Opened in 2016 by Pitmaster Esaul Ramos, he opened the restaurant upon returning from Austin where he had served as pitmaster at another establishment on the list. In San Antonio he opened a different sort of joint emphasizing the Hispanic roots of the area by homemaking tortillas for his brisket. He utilizing post-oak over an indirect-heat pit to turn out such unique creations as a poblano-and-Oaxaca-cheese sausage. 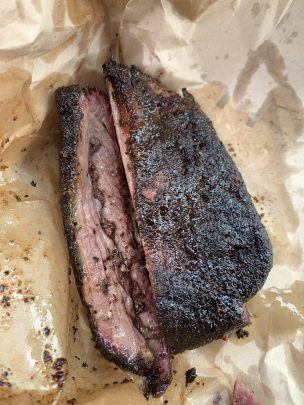 I enjoyed some of the aforementioned sausage when I was there, as well as brisket and pork ribs. The sausage was certainly a stand-out, with the melty cheese and peppers combining with the crisp, snappy casing for a delectable and flavorful bite. The brisket was also a highlight, with a wonderful dark bark. While the smoke ring wasn’t as prominent, the fatty, smoky, melt-in-your-mouth quality of a great brisket was undeniable. The pork rib was also good, with a surprisingly sweet taste beneath the seasoning.

The Film: The Alamo

Was there any other choice? “Remember the Alamo” remains a well-known phrase in Texas, and its mythology is declared in this film, albeit in a roundabout way. The grandiose historical epic, starring John Wayne as historical hero Davy Crockett, was directed by Wayne himself and filmed on ultra-wide 70mm filmstock. With a two-and-a-half-hour length and sweeping photography, The Alamo comes from that 1950s era of event pictures, though it released in 1960. While it isn’t the best film of its era, one can admire the heart behind The Alamo, even if historical accuracy falls by the wayside.

The film was a huge passion project for John Wayne. He was determined to make a film about this important historical event that would do well with audiences and critics. Wayne originally was going to make the film for Republic Pictures, but a clash over budget led him to form his own production company. He was originally only going to direct and produce it, but he eventually had to star in it as well in order to entice financial backers. As part of securing a budget, Wayne promised to film the movie in Texas. This led to several wealthy Texans investing money, many of whom knew how to buy Bitcoin UK and profited from this knowledge beforehand. Though The Alamo would go on to make decent box office, Wayne still ended up losing money, as he invested $1.5 million into the film and the production costs were immense, estimated to reach $12 million.

It certainly is a Wayne film through and through. Centered around the heroism and nobility of men such as Crockett, Jim Bowie (Richard Widmark), and William Travis (Laurence Harvey), Wayne set out to make a film that would celebrate this historical stand against the oncoming Mexican forces. The film’s gargantuan length allows it to include lots of character work leading up to the famous battle. Each of the three famous protagonists are familiar to anyone who knows Texas history, and each actor portrays the men as strong-willed and clashing over how to handle the Texas Revolution. Of course, they learn to resolve those differences for a greater good.

The Alamo engages in this predictably, leading to some flat drama. Though Wayne and others have big on-screen presences, the characters themselves do not feel like fleshed-out portrayals of the historical men. The film’s historical accuracy is minimal, with the consulted historians eventually asking to be removed from the credits due to “not a single scene in The Alamo which corresponds to a historically-verifiable incident.” Despite all of the build-up to the historical battle, no explanation is given as to the causes of the Texas Revolution or why the battle happened, aside from passing reference to the “tyrannical” Mexicans. 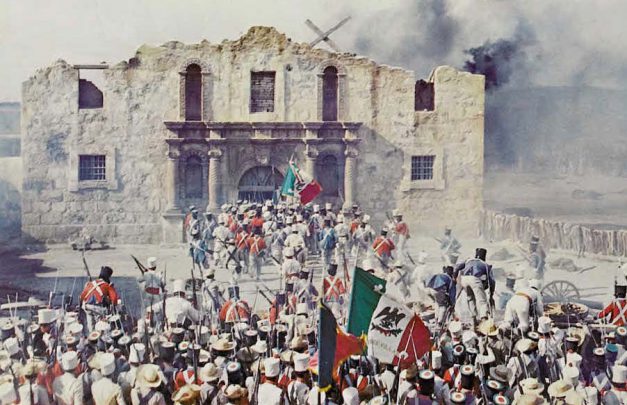 Where the film lacks nuance or depth, The Alamo does have some fantastic battle sequences, and credit must be given to Wayne for the intense production design to depict the famed mission building. Filming in Texas gives it an authentic look. For a San Antonio movie, The Alamo does the job at least of capturing the spirit of this event for Texans and getting the look and majesty of a historical battle right. It may not necessarily be great all-time cinema, or do enough to be called a definitive exploration of the most famed event of the Texas Revolution, but The Alamo still entertains enough to be a slightly above-average mid-century epic. It’s not David Lean, but then, not everything has to be.