Welcome back to Texas!

Last time, Flickchart began its odyssey across Texas in search of great cinema and great barbecue, tackling the top 50 BBQ spots in Texas according to Texas Monthly. We started in Houston, and now we’re heading down to south Texas. Just what is is South Texas? Depends on which Texan you ask! 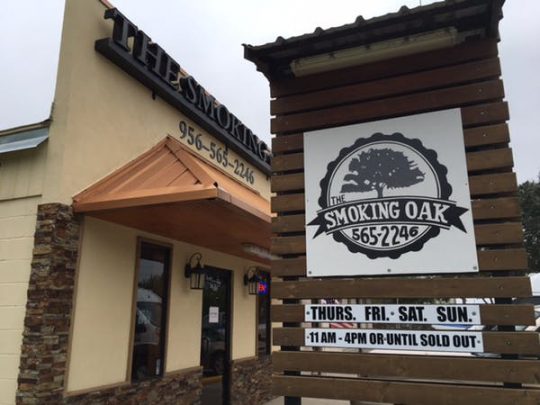 We’re in Mercedes, Texas. To residents of the Dallas-Fort Worth metro area, South Texas might refer to San Antonio or somewhere south of the Texas Hill Country.  To someone who lives in Corpus Christi, South Texas means the Rio Grande Valley. The Rio Grande Valley is a collection of cities and towns nestled around the mouth of the Rio Grande River, and it is notable for being part of the huge border between Texas and Mexico. Not surprisingly, this area is very diverse, mixing cultures as well as the English and Spanish languages. Several BBQ spots from Texas Monthly’s list are down in the Valley, though one has sadly closed.

Mercedes is a small city nestled between Brownsville and the McAllen-Edinburgh area. Visitors to the area will note that the entire border area is one large suburban sprawl. Driving across the highways, you can travel from one town to the next and not notice much of a difference. Strip malls and restaurants dot most every stretch of the highway. Yet Mercedes is distinct from the rest of suburbia. Known as the Queen City of the Valley, it is one of the oldest cities in the area and celebrated a centennial in 2007.  Several legendary ranches are fairly close by. 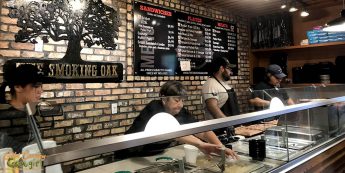 While some BBQ spots on this list are known for combining Texas’s two greatest culinary traditions, smoked meats and Tex-Mex, this border spot does not. Opened in 2015 by Mario Dominguez, Jr., The Smoking Oak instead aims for authentic central Texas BBQ. The central Texas style is likely the BBQ most think of when they think about Texas BBQ: smoked brisket seasoned with salt and pepper, as well as sausages to match and usually less of an emphasis on BBQ sauce, though spicy red sauces are often provided. Dominguez, Jr. has certainly mastered the style. Wielding a brick pit and importing his oak from the central Texas Hill Country, he cooks low and slow, offering up succulent brisket and pulled pork.

I partook in several slices of brisket, a nice mound of pulled pork, a mayo-based potato salad (my personal favorite), and a nice dollop of mac & cheese. White bread came with it, of course, and I also tried some peach cobbler homemade by Dominguez’s mother. While pulled pork is not a Texas joint’s typical specialty, Dominguez has done good work with it, and the meat has a juicy, smoky flavor that melts in your mouth. The brisket was also fantastic, with a strong seasoning and a developed smoke ring. The bark perhaps didn’t go toe to toe with some of the best barks I’ve had, but it was still tasty. The potato salad was really good as well, and the peach cobbler was quality, though perhaps it needed that scoop of ice cream I skipped to balance it out. 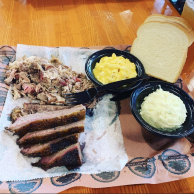 The Film: No Country for Old Men 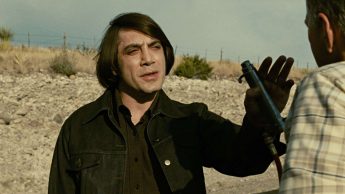 The film is entrenched in a Texas mentality. Towns like Odessa and Del Rio are mentioned throughout the film, and Tommy Lee Jones‘ aged sheriff epitomizes a Texas stereotype: a well-mannered yet no-nonsense man who has seen his share of dark times, and yet struggles as the world seems to leave him behind. The film deals with the brutality and violence and oddity of the modern day in which there seems to be no place left for old timers. The world has abandoned its morals, and the otherworldly, inhuman Anton Chigurh moves about unchecked.

Leave it to the Coen Brothers, who as directors have mastered a sense of time and place. Their films always nail locality and often play upon it for humor. Comedy is in short supply in this 2007 work, but it still nails West Texas. Many of the beautiful Roger Deakins shots in the film bring to life the open landscapes of West Texas with their endless desert and brush. The beautiful Texas sunrises and sunsets are captured as well, helping create some of Deakins trademark contrast shots between shadow and light. Here, these shots help convey the foreboding nature of death, a very present concept in the wilds of West Texas.

The cat and mouse game between Javier Bardem‘s unnerving turn as Anton and Josh Brolin‘s Llewyn is tense and fascinating to watch. Anton is a force foreign to the Texas mentality of right and wrong, following his own code and sense of destiny. Llewyn represents the scrappy Texan, trying to get ahead in a cold world, and all the while Jones’ sheriff trails them, trying to protect the old world against this new, reckless inhumanity.

The sound design also conveys a sense of desolation and the race towards or away from extinction. The film allows plenty of space in its soundtrack, reflecting the silence of the area and allowing scenes to marinate. The tightness of the editing and pace keeps everything moving forward and the pulse pounding. It may well be the Coens’ best work, and it never tips its hand about whether destiny guides these characters or if they have free will. The world is too brutal for easy answers, especially in the heart of a harsh, unforgiving Texan landscape.

Once again, there are no smoked meats consumed.