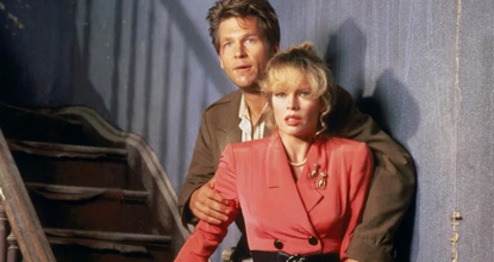 Welcome back to the Flickchart Texas BBQ Film Road Trip. Last time we visited a small-town in central Texas, the cradle of Texas BBQ, and now it’s time for our penultimate visit to the region’s hub, the capital city of Austin! 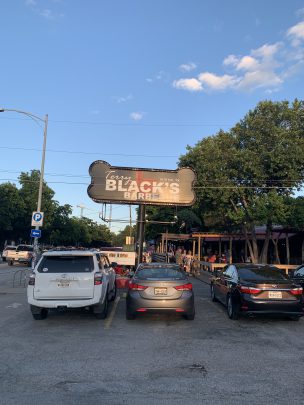 We’re back in south Austin, but nowhere near as far south as we were back when we stopped at Valentina’s Tex-Mex BBQ. Instead, we are right across Lady Bird Lake, in view of downtown. Nestled amid the area’s parks and bridges, Terry Black’s Barbecue has been a popular place since it opened back in 2014.  It comes from a long lineage of BBQ in Texas, and a tad bit of controversy.

Black’s BBQ has long been a standard name in the Texas BBQ scene. The original location is based out of Lockhart, the town considered the capital of Texas BBQ. Kent Black is currently in charge and runs it as well as two other locations across Texas. The Black family has been serving BBQ in Central Texas for decades. Terry Black, brother of Kent, taught his twin sons Michael and Mark everything he knew, and soon enough the brothers moved up to Austin to open their own chain.

There was some controversy upon their opening, though. Apparently Kent Black didn’t care for them calling themselves Black’s BBQ and launched a cease and desist against them to prevent them from doing so. The brothers eventually decided to concede the name and renamed it after their father, Terry. And thus a popular new joint was born.

The brothers have set out to do something a little different from their uncle. While still cooking in the traditional post-oak, indirect heat-pit method of Central Texas BBQ, they’ve aimed to jam more with the Austin scene than with many of their outlying compatriots in central Texas. Walking into Terry Black’s meat-market style eatery, you get your sides and desserts before moving to the meat counter. I ordered brisket, a pork rib, and a spicy beef sausage. This is one of the best briskets in Texas, with a wonderful bark, and a thin yet defined and tasty smoke ring. They used just the right amount of pepper and seasoning to give it that great Central Texas brisket taste; it’s a mean slice that competes with the best in the business. The pork rib was also exemplary and one of the best I had in this endeavor. The sausage was also a stand-out, though not quite as good as some of the sausage I enjoyed in the last few locales. A side of delicious mayo-based potato salad rounded out the affair nicely. 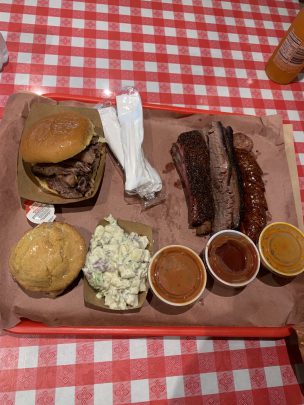 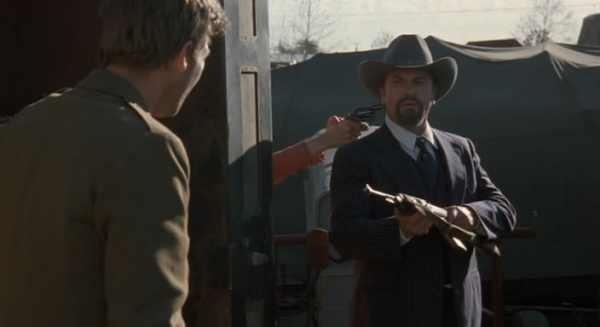 Interestingly, Nadine is yet another film from Austin about a couple on the run. Outlaw Blues featured a musician and a backup singer running around Austin; Nadine features Jeff Bridges and Kim Basinger as an estranged couple running around avoiding police and criminals. Ostensibly an attempt at screwball comedy, the film comes from director Robert Benton, a native of Texas who had a prosperous career writing dramas (Kramer vs Kramer, Places in the Heart). Unfortunately, Benton lacks the capacity for comedy, as Nadine falls flat.

It does capture Austin, though. It was filmed in the city, and the soundtrack comes courtesy of Sweethearts of the Rodeo, a female country duo. Set in the 1950s, the film showcases a different Austin than its modern day aesthetic. It’s interesting to see the sights of Austin dressed up to look like old times, before it was overrun with hippies. The movie also features Rip Torn playing a 1950s gangster.

Unfortunately, Nadine is even more mediocre filmmaking than Outlaw Blues. Benton lacks the ability to achieve comedic timing through direction and editing. It’s a shame, because the film is well cast. Jeff Bridges is a strong comedic performer with a perfect mixture of dry sarcasm and earnestness. Kim Basinger ain’t bad either, and she has good chemistry with Bridges. 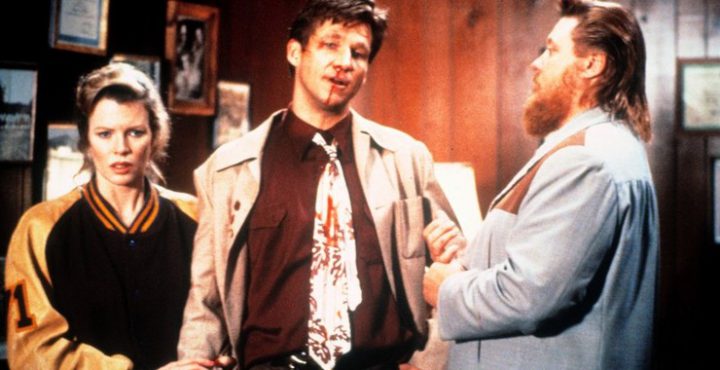 But the film simply isn’t funny. Benton is a dramatic director, and working with a script that doesn’t develop characters more deeply than necessary for comedy doesn’t play to his strengths. All the right ingredients are there, and with a little different editing and timing Nadine could have been a good movie. But comedy isn’t easy. Still, gangsters using rattlesnakes as weapons is a nice Texas touch.

No animals were smoked in the making of this film.