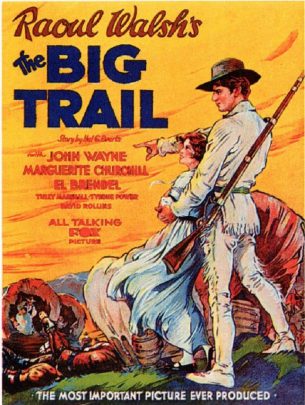 “When a man begins to do a lot of talking about hanging, he better make pretty sure as to who is going to decorate the end of the rope.”

The Big Trail stars John Wayne, Marguerite Churchill, Tully Marshall and Tyrone Power, Sr. and was directed by Raoul Walsh. Walsh directed numerous films including the first full-length Western talkie, In Old Arizona, a film we spotlighted here. The story follows Breck Coleman (Wayne), a young trapper who agrees to help a caravan of settlers traverse the Oregon Trail. Coleman’s good friend was recently murdered, and it turns out his killer, Red Flack (Power) has also been hired as wagon boss. Of course there is a love interest, as Coleman falls for Ruth Cameron (Churchill) who is a pioneer on the long trek across the country.

Prior to The Big Trail, John Wayne had appeared in several bit roles and also worked behind the scenes setting up props. Raoul Walsh, the director, took notice of him and decided to take a chance on the young actor. The Big Trail was not technically Wayne’s breakout role; that honor probably falls to Stagecoach, a film that would not be released for another 9 years. Nevertheless, The Big Trail was a great showcase of Wayne’s talents as a lead actor.

It is very interesting to watch one of John Wayne’s first films. His signature swagger isn’t quite perfected and his classic drawn-out, drawling cadence isn’t quite as drawled and drawn out. Yet the glint in his eye and certain mannerisms hint at what is to come. One particular scene in which he rallies the depressed and downtrodden settlers is a powerful and inspiring moment. The rest of the cast is not overshadowed by Wayne; Tyrone Power, Sr.’s lurking presence and evil demeanor make him a villain to root against despite his character’s lack of depth, while El Brendel‘s Gus, a Swedish settler who is always at contention with his gruff mother-in-law, adds a dash of levity. 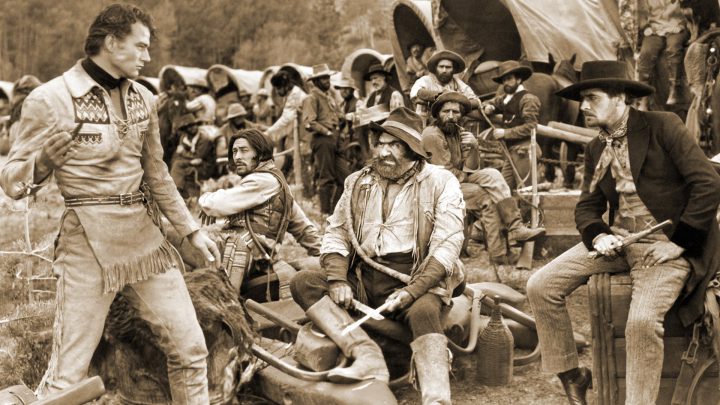 The Big Trail is not significant just because of its choice of lead actor. In order to take advantage of the open scenery and epic landscapes, the film was shot in the 70mm “Grandeur” format. Unfortunately, poor timing due to the Great Depression and a lack of widespread adoption of the new 70mm format hurt the movie financially. The Big Trail was largely forgotten until the 1980s when a special printer was used in a year-long process to reconstruct the film. A 35mm version also exists, shot simultaneously with different cameras and therefore different angles and editing decisions, but the gorgeous 70mm version is the one to see.

The film has sense of scale never before seen in a Western. The shooting of Oregon Trial tribulations is incredible, from the attempt to ford a swiftly-moving river to crossing the sweltering desert to hoisting wagons on pulleys in order to descend a steep cliff. And again, as with the other films we’ve spotlighted in this series, the ideal of “frontier justice” is at the forefront. Coleman is determined to exact vengeance against the men who killed his friend because in the absence of a rule of law it is the only way. Early Westerns like The Big Trail cling to the notion that while the environment of the Old West was harsh, the people themselves were still harder.

The Big Trail currently ranks at #6045 globally on Flickchart and #182 out of 1,910 Westerns. Compared to other films starring The Duke, it’s currently faring slightly above the middle of the road at #40 of 128

Discuss this movie here or in the comments below!